The celebrated career of the late Skandor Akbar

Long before he was Skandor Akbar, one of the most hated managers in wrestling history, Jim Wehba, who died suddenly Thursday at the age of 75, was just a backyard wrestler.

His running mate at the time was Mike Ryckoff, who had a ring set up in his backyard. The two buddies would try what they saw on TV.

In recalling the memories in April 2010, Ryckoff was proud of what Wehba accomplished. “That’s something he wanted to do as a kid. Now how many guys have completed the ambition they started out with as a kid, the thing they wanted to do?” 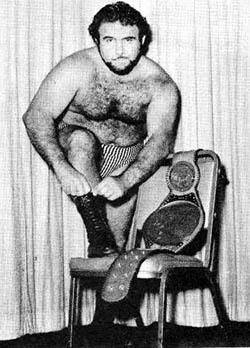 Indeed, few did it better than Akbar.

And to dismiss his wrestling career and focus only on his managing does the man an injustice.

Wehba was born September 29, 1934, in Wichita Falls, Texas, and grew up Vernon, Texas. Often billed from Lebanon, Syria or Saudi Arabia, his father actually was from Lebanon, and his mother, Mary, had Arab roots as well, though she too was born in Texas. With two older sisters, Jimmy was the baby of the family.

He was into weightlifting as a preteen, as his cousin owned a gym. Promotional material claimed Wehba could bench press 500 pounds.

Wrestling was always of interest, especially since another cousin, Frankie Cain, was the Great Memphisto.

Ryckoff and Wehba were bouncers and befriended the promoters enough to start refereeing. It allowed them a chance to see how it all worked up close.

One of their first stops was Amarillo. “We went to Amarillo,” said Ryckoff. “They told him, ‘If they can’t do anything to you, then you don’t let ’em do it.’ So they couldn’t move him. He was strong as an ox. He could lift a car.” The excitement brought people from the office down, and they watched as the other wrestlers tried to make Akbar lose his temper; “He never did. He was always cool.”

Week to week, Wehba would be an invader from the Middle East, and the next, he might be billed as a Mexican. He was Mighty Jim and Wildman Wehba at various times, as well as Prince Emir in the Pacific Northwest.

“You were typecast a lot in those days. Naturally I was a heel because I was this big, dark-complexed guy,” Akbar told the The Dallas Morning News in 2000. “Sometimes I wrestled as a clean guy. But the villain was my thing. I tried to be a good guy, but people just didn’t like it.”

But Wehba stepped aside for a while, and Ryckoff kept at it. “Then Jimmy got out of the business for several years,” Ryckoff explained. “In the ’60s, I phoned him and said, ‘Jimmy, what did you want to do in your life? You always wanted to be in the wrestling business. You got started. What happened?’ Anyway, it was several things, so I said, ‘You just call Leroy McGuirk, and say you’ll eat baloney sandwiches, wash dishes, whatever it takes, but you want to get in the business.’ That was actually in the ’60s before he really got started.”

In 1966, it was Fritz Von Erich, who ran the promotion in Dallas, that suggested that Wehba needed a more Arabic sounding name. Skandor Akbar means Alexander the Great.

From there, his career took off.

His best known pairing was a tag team with Danny Hodge.

“That was a period in my time that I was probably considered like a fair-haired, like they call babyfaces now,” Akbar said in 2004.

He was brought into the Mid-South territory aligned with the evil Assassins. Hodge showed him the light. “Danny took Scandor aside one night and talked to him; and this was the major turning point of his life,” reads the N.W.A. Championship Wrestling program. “Hodge convinced his new friends, and incidentally one of his biggest fans, that he was being used and was wasting his life with the Assassins.”

“If I wasn’t with Danny, the people hated me that much more. But if I was with Danny, then that made it,” he said, adding that Hodge was extremely charismatic. “He was literally Mr. Oklahoma and later on, when I turned against him, I had some very, very close calls with fans and things because they loved Danny Hodge.”

Another successful pairing came with Ox Baker, in Georgia, where they held the tag titles in 1972.

Back in the Tri-State territory, Akbar would challenge Arman Hussian for the North American Heavyweight title.

“You could probably say that I was an intricate part with him in his career. The run that we had was one of the best runs he ever had,” said Akbar after Hussein’s passing at the end of 2007. “It was kind of a slow time of year. My goodness, we went out to Vicksburg, Greenville, Greenwood, all those, Jackson, and we sold them out for five, six weeks in a row. I made him a babyface, a good guy.”

It was an exhausting territory. “At that time, we had more towns than anywhere in the country. We had two, three towns every night. But if you were working on top, you might be in Tulsa one night, then have to go to New Orleans the next night. Some guys stayed on the bottom, the middle and the top. Really and truly, nobody thought we’d do the business that we did. We did fantastic business.”

WWE Hall of Famer Jim Ross was around in those days, often as a referee. “When I was working the territory here in the Mid-South, average was about 2,000 miles a week,” Ross remembered. “I remember being on the road with Skandor Akbar. He really took me under his wing in the early days, teaching me where I could save money and be on time, and manage the time that we had so we were never late, you were always there, no matter what. We always left early, to plan to have a flat. … You always had time built-in so you could salvage your schedule, you weren’t going to be late. We’d share a hotel room. Our room would be $8 a day, so that was $4 a piece. So getting that $18 trans from those guys went a long way. That would pay your expenses. So being young, and being the wheel-man, and providing the car — the car smelled, and the guys were passing gas, smoking cigars, snoring, and all this stuff, it was quite the existence. You got your money.”

The car was also a chance to learn, Ross said.

In his autobiography, The Stone Cold Truth, Steve Austin concurred. “When I was breaking in, I used to ride from town to town with Skandor Akbar and Bronco Lubich,” he wrote. “Both of these men were former veteran wrestlers who knew a lot about the business and had been all over the world. I was so lucky to be talking with them, learning the psychology of pro wrestling. Their talking to me, telling me how to do things, as we were going up and down the road, was a terrific education in the wrestling business.

“We’d be together in one of their cars, and they’d be up front smoking big, smelly cigars and I’d be in the backseat asking them questions and soaking up everything they were telling me. That was a college degree in the old-school ways of doing things. I love those guys.

“Sometimes they’d tell me old wrestling stories. I’d always enjoy hearing those. I didn’t have any money then, and they wouldn’t charge me for transportation. I’d just sit in the back and ask them questions. Those guys were cool. They knew I was genuinely interested in learning, and they both took me under their wings.

“Both Akbar and Bronc were excellent storytellers. When one of them told a story, the way they laughed made me want to laugh too. It was a real good time in my life. Those guys and their wealth of knowledge about ring psychology were tremendous influences on me throughout my whole career. They also furthered my respect for the wrestling business.”

Akbar’s managing career, which will be dealt with in a separate article, was as much a mentoring job as managing. He promoted wrestling shows off and on over the years, and loved to make personal appearances and see old friends. Akbar was a regular at the Red Bastien Texas Shootouts in Dallas.

Ryckoff recalled their first trip to the wrestlers-only Gulf Coast reunion in Mobile, Alabama. Akbar was presented with an award, and afterward told Ryckoff, “That was the fasted weekend I ever spent in my life!”

Wehba is survived by one son, Darryl, from his first marriage, which ended when Darryl was just an infant. He was married two other times: to Doris for 18 years before she died of kidney failure, and to Peggy, for 10 years, ending in 1999. Through both marriages, he has extended step family.