If Jeanie “Lady Blossom” Clarke had done nothing else but come up with the gimmick name of “Stone Cold” for her then-husband Steve Austin, she still would be seen as having left her mark in the wrestling business. But it would have made her new autobiography a lot shorter. And that would have been a pity, since fans would miss out on an excellent tale of Clarke’s life from the top of the wrestling world to her descent into life’s lowest depths and her difficult climb back to redemption. 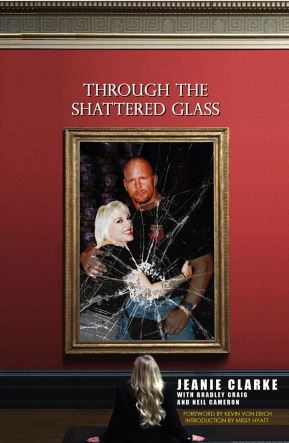 The first part of Through the Shattered Glass, authored by Clarke with co-authors Bradley Craig and Neil Cameron, details Clarke’s life in small-town England where, at a young age, she was removed from a turbulent home life with a single mother who struggled with alcohol abuse, and forced to find other ways to occupy her time. She eventually found herself attending a wrestling show where she would meet wrestler “Gentleman” Chris Adams. Their whirlwind romance eventually saw the pair move to the United States where they ultimately broke up as a result of tension brought on by Adams’ drinking and philandering,

They would eventually hook up again professionally when Adams asked her to join him in World Class Championship Wrestling in Dallas. In this section, Clarke shares stories of both in-ring and out-of-ring events that any fan of wrestling from that era will appreciate.

Her story really kicks in, though, after she’s introduced to, and paired up with a then-up-and-comer Steve Williams — who, as any wrestling fan knows, ultimately became wrestling’s biggest star in “Stone Cold” Steve Austin.

Most of the book covers her life with Austin, from their romantic courtship to their tumultuous final days together, and everywhere in between. Clarke goes into a lot of detail about their life together, sharing personal stories of the couple as Austin climbed his way to the top of the wrestling world — taking the reader from places as diverse as a packed WrestleMania stadium to a barn in the middle of small-town Texas to a hospital room and back again.

Throughout this period, Clarke shares details on how Austin’s drive for professional success impacted her, both positively and negatively, and in turn, how her drug addiction impacted both of their lives, and the lives of their daughters. To the point where their family eventually shattered, just like the glass that signaled Austin’s entrance into an arena.

But, like when that glass broke, it meant that business was about to pick up. And that’s what Clarke had to do to herself after hitting rock bottom with her addiction. A lengthy stint in rehab, and Clarke emerged triumphantly, a fact that she celebrates as the book comes to a close. This latter part of the book is particularly compelling, as it goes into some really dark places before ending on that high note. Two high notes, really, in the form of comments from her and Austin’s two daughters, who write about the love and respect they have for their mother for finally conquering her demons.That kind of emotional content may not be seen in most wrestling autobiographies. And that’s fine. Because just like Clarke isn’t just famous for one thing, the book isn’t trying to be simply a wrestling biography. Rather, Clarke’s tale is simultaneously a personal diary, a historical scrapbook, a cautionary tale, and ultimately, an inspirational parable. And well worth the read.