TORONTO – Sometimes, too much of a good thing can be a bad thing.

Just like infamous rivalry between Edge and John Cena which offered up some incredible, unforgettable bouts but wore out its welcome no matter how the WWE repackaged it, Cena versus Seth Rollins has hit that proverbial wall.

Although their main event match for Cena’s United States Championship at Toronto’s Ricoh Coliseum was pay-per-view quality, an exceptional match-up from start to finish, you couldn’t help but feel we have seen it all before and don’t really want to see more any time soon. 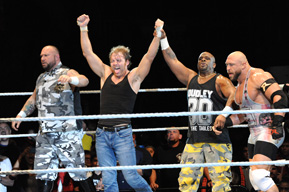 Ambrose, The Dudleys and Ryback celebrate after teaching The Wyatts a lesson. Photos by Mike Mastrandrea.

Supported by a truly stellar undercard, one of the best in recent years as far as individual match quality and work rate goes, the main event was as hard-hitting as usual between the two superstars but featured far too much posturing by Rollins which often slowed the momentum.

Repeatedly countering each other’s trademark maneuvers, things got vicious when the fight went to the floor. A backdrop by Cena sent Rollins over the top rope. He landed hard on the outside. Rollins got the better of Cena as they traded punches and he threw the U.S. champ maliciously into the ringside stairs for the second time that night.

Back in the ring, a knee from the top rope brought Cena down for a two count. Later, Rollins was crotched on the top rope but managed to reverse things on Cena delivering a running bucklebomb for another two count.

Faithfully following the modern wrestling canon in which a-title-doesn’t-change-hands-when-there-are-no-cameras-present, Cena countered Rollins’ attempt at a Pedigree from the second rope into an Attitude Adjustment spiking him into the mat for the win.

While it may not have been of the same caliber as far as technique goes, the No Holds Barred bout between Dean Ambrose and Bray Wyatt was actually a far more interesting because of its zany twists and turns.

In a match that saw both mat maniacs beaten mercilessly with a Kendo stick, bashed with steel chairs, it was a foregone conclusion that a couple of tables would also make an appearance. 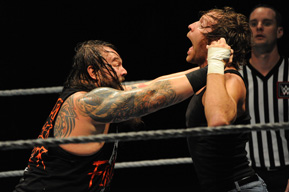 Wyatt’s got Dean by the throat.

Propping up the Keno stick in a corner, Bray Wyatt whipped Ambrose into it. Clutching his throat, Ambrose battled back and laid an unrelenting beating on Wyatt with the stick. As Ambrose put Wyatt through a table with a flying elbow smash from the top rope, Luke Harper came to the rescue, hitting Ambrose with a boot to the face as Wyatt rolled out to the safety of the floor.

Perhaps lured out by the hardcore mayhem, The Dudley Boyz hit the ring ending Harper’s interference by planting him with a 3D through the table.

Possibly feeling a little left out, Braun Strowman powerwalked his way to the ring dispensing with D-Von. While Bubba Ray stood his ground, he couldn’t bring down the giant and was felled by a devastating clothesline. 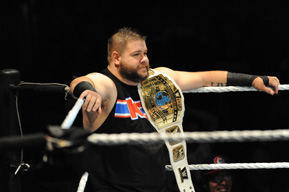 Kevin Owens is ready to fight.

Conceivably still harboring some pent up energy after his Intercontinental Title match with Kevin Owens earlier in the evening, Ryback charged out challenging Braun Strowman. Double-teaming the big man, Ambrose and Ryback managed to drive Strowman from the ring.

Thrown into a chair propped up in another corner, Wyatt fell victim to Dirty Deeds and a three count. As The Wyatt Family licked their wounds on the ramp way, the Dudleys, Ambrose and Ryback stood tall in the ring.

The next WWE house show in Toronto is December 30th, 2015 at the Ricoh Coliseum. 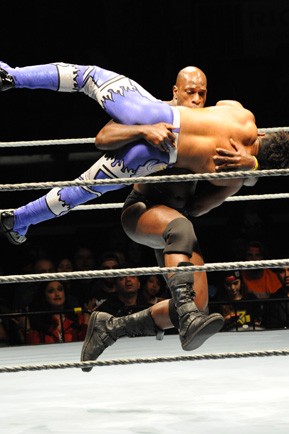