Artist gets chance to shine at WWE Axxess

To say Schamberger is excited is an understatement. 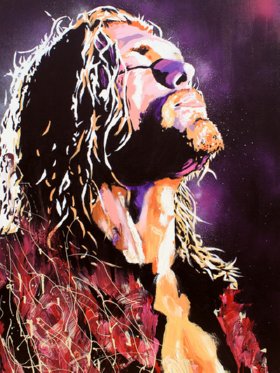 Rob Schamberger’s painting of Edge from his Champions collection.

“I’ll be set up right inside the doors at Axxess with over 100 paintings on display and I’ll also be painting a giant piece celebrating the great moments from the last 30 years of WrestleMania!” shared Schamberger. “Since this isn’t tied to any of the Axxess sessions, fans can come in as soon as the doors open to get their hands on the paintings and see what I’m working on.”

The opportunity at Axxess came about through time, he said. He first teamed up with WWE a couple of years ago, at the suggestion of Jim Ross.

“It grew out of our existing relationship, with WWE selling original paintings of mine through WWE Auctions,” he said. “We were exploring other ways we can work together and this opportunity was one that couldn’t be passed up.”

At the moment, there are three separate paintings by Schamberger up for auction on the WWE website, one for each member of The Shield.

The native of Kansas City, Missouri, will be setting up shop in New Orleans at the Ernest N. Morial Convention Center. Having people watching will be a switch from a solitary studio.

“It’s a different vibe for sure, but still a fun and energetic one,” he said. “I’ll be modifying my style and approach a bit for it, but ultimately the painting will still look like it was done by yours truly.”

Schamberger does have a unique, colourful style, and first came to the attention of wrestling fans a couple of years back with a crowd-funding campaign to paint all the NWA World champions. Since then, he’s been hard at work on many paintings of wrestlers, trying to at least capture every champion — ever.

“I think my Champions Collection portrait of Edge is likely the best thing I’ve done to date,” Schamberger said. “I really had all cylinders firing when I did that one. Several of the pieces I’ve done recently for the WWE Hall of Fame inductees have turned out nicely too. Ultimately I’m constantly pushing myself to be better on each new piece I do.”

He is not worried about being pigeon-holed as “that wrestling painter.”

“Being successful at doing something I love is never a bad thing, and being viewed as the guy that’s making people look at wrestling in a new way is a good thing,” he said. “I’ve heard from a lot of people who have rekindled their passion for wrestling after seeing my art, which is powerful. Plus, through my wrestling art I’ve raised over $10,000 for various charities in the past year alone. How many other artists get to say that?” 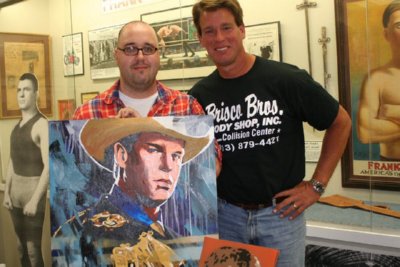 Rob Schamberger and JBL at the National Wrestling Hall of Fame Dan Gable Museum in Waterloo, Iowa, where some of Schamberger’s work is on display. Courtesy Rob Schamberger

Down the road, Schamberger plans “more paintings of rasslers!”

“I’ll naturally continue with the Champions Collection, and will also be doing more portraits of the great moments and performers in this great world of pro wrestling,” he said.

“I think there’s a lot of potential for something truly magical to happen in the main event, should Daniel Bryan make it through that gauntlet and get the win. This could truly be one of the biggest moments in wrestling history, and I’m super excited to be there in the crowd to watch it unfold!”