In early March, Jessica James embarked on her second tour of Japan. We asked her to provide ongoing updates for SLAM! Wrestling readers, in the form of an ongoing travel diary. As the little All-American girl travels from the heart of Texas to the “Land of the Rising Sun,” James shares her experiences and shares a unique insight of an American woman wrestler in Japan:

But who is Jessica James? 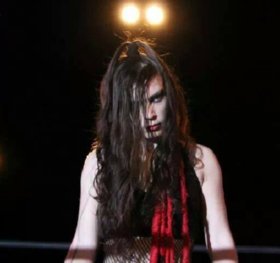 She is living proof that everything isn’t always bigger in Texas. At 5-foot tall, and tipping the scales at just a shade over 110 pounds, the petite Dallas resident (born in Oklahoma, raised in Texas) has a lithe, athletic frame and a breezy girl-next-door charm.

James started wrestling in 2005 and is a fixture in Anarchy Championship Wrestling, where she competes both as “good girl” Jessica James and also as her sinister alter-ego, Lady Poison — a face-painted methodical ghoul who oozes a green substance from her mouth and beats opponents with her patented “Kiss of Death” (think Muta mist, but infinitely sexier). She has competed in SHIMMER, Ring of Honor, IndyGurlz, and throughout the Southern U.S. She was ranked #33 in the 2013 Pro Wrestling Illustrated Female 50.

I’ve only been here a few days. Long flight from Texas. I slept, watched movies, ate, and drank lots of free international flight wine. I got to the dojo and unpacked. There are five girls in our one room — Crazy Mary Dobson, Evie from New Zealand, The Lovely Lylah from OVW, Cindy Sanders from Belarus, and me. We’re sleeping bunk-bed style, like summer camp. I did my best to stay awake, which was very difficult after the flight. Still, I managed to stay up with the girls until 4 a.m., after making a snack run to the local 7/11.

The next day, we went to see a Gwar concert. We spent all day with them backstage; super cool guys. I’ve got to say, there are lots of similarities between putting on a Gwar show and a wrestling show. The concert was awesome. Their fans worship them. It was a spectacle — blood and guts, deafening music, giant junk exploding and spraying the crowd with blood. Then there was the after-party at a place called Roxys — there were flames on the walls and Ozzy coming from the speakers, and their burgers were bigger than my face. I had two. Then, after an amazing night of food, booze, and hanging out with Gwar, we had a mad rush to catch the last train home. We were packed together like sardines. [Editor’s note: Dave Brockie, Gwar’s lead vocalist as “Oderus Urungus” died a few days later, on March 24th.] 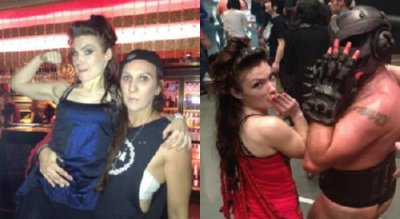 Left: Madison Eagles demonstrates how to pick up chicks in Roppongi. Right: Getting cheeky with Gwar backstage.

Early the next morning was our first day of practice. Our schedule is training twice every day, wrestling a show on the weekend, and then one day off. The training is intense. Hours of conditioning. I learned more new ways to make myself sore after one day than in the last six months outside of the dojo. I’m sore today, to say the least.

I wrestled my first show on the tour for Shinjuku FACE in Tokyo. Jessica James didn’t make an appearance, but Lady Poison did. Lady Poison wrestled a three-way against a masked wrestler (Yuiga) and a ghost (Aiger) on Sunday. The crowd was terrified, but they enjoyed it. Long, exhausting day. The next day was our day off: Roppongi Monday! [Editor’s note: Roppongi is a district in Tokyo known for its nightlife.] There was a big group of foreigners from all over the world coming together to relax, drink, dance and have fun after a long and intense week of training and wrestling. Groups from several different companies are all here in Japan. And, of course, at the end of the night was our customary mad dash back to catch the last train home. It was a long train ride back with a belly full of booze. Hitting the bed was euphoria! 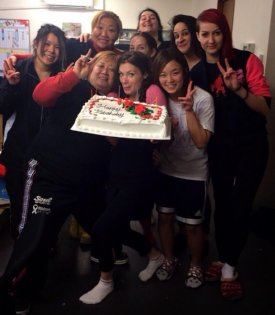 A surprise party from the dojo girls.

Up early again for training. Going through roll drills I’ve never seen before, turning a movement I thought to be simple into a complicated series of acrobatics. Drills upon drills upon drills, then running the ropes, then more drills, followed by judo sparring, and neck strengthening exercises. Two thoughts were going through my mind: 1) I won’t be able to move in the morning and 2) When I get back to the U.S., my tiny muscle will have their own tiny muscles on top of them. I’ll be a force to be reckoned with. And, after all that cardio, we did ring work.

When we were done, my dojo sisters surprised me with an early homemade birthday dinner, along with Sakura beer, sake, and four bags of Cheeza, possibly my favorite snack in Japan. Pizza, potatoes, broccoli, and shrimp. It was awesome. Thank you, ladies!

White Day is like Valentine’s Day here, but girls give gifts to boys on Valentine’s Day and the boys give girls gifts on White Day (March 14), so we all got gifts from the boss. Then they took us out to an absolute feast, then out to a karaoke bar for more eating and drinking. Training is really hard when you’re hung over … but it’s totally worth it.

I made a long birthday weekend of it by going back to Roppongi and then going to a Pro Wrestling NOAH show, followed by dinner at DANGER Steak restaurant. I’m getting ready for a show as I write this. My belly is full, I’m sore, exhausted, bumped, bruised, and beaten. I had one dreadlock yanked out by its roots. But I’m already stronger and heavier and having a ball wrestling … and it hasn’t even been a month yet. Tomorrow is a day off — no diet, no training … just a Girls’ Day free in Japan.