Schamberger takes WrestleMania to the matte

For nearly two months, Rob Schamberger took his own inspiration to the mat – with the swift stroke of a paintbrush and the stiff outlining of a street-art like stencil as his tag team partners. The artist’s canvas was his domain as he commemorated every WrestleMania since the event’s inception.

Schamberger, of Kansas City, Mo., jokingly said “masochism” made him decide to memorialize the entirety of WrestleMania, which he accomplished by mid- to late-February, but also to complement his previous series of former world champions. It’s also a body of work he will turn into a collection of prints called The Immortal Showcase. 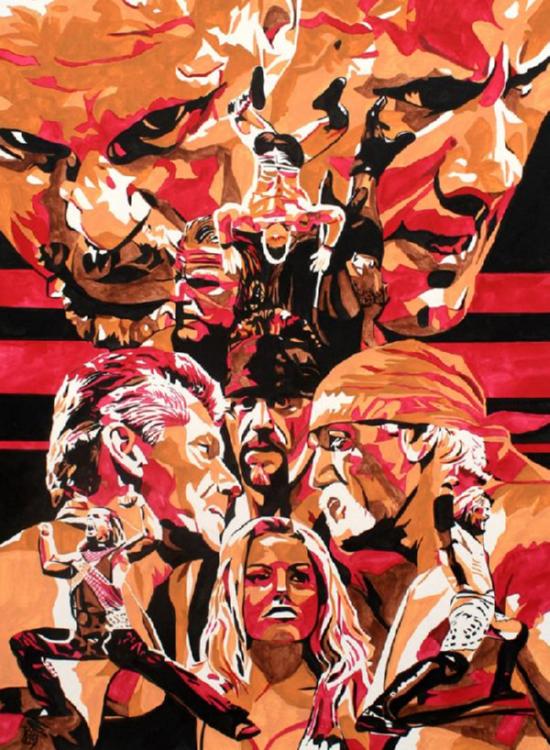 WrestleMania 19, as painted by Rob Schamberger.

He painted a 7-foot-by-5-foot canvas at last year’s WrestleMania Axxess to highlight WrestleMania moments, and even with that amount of space, Schamberger said entire years were excluded.

“I started thinking it would be nice to do a separate painting of each one, not quite realizing the undertaking,” Schamberger said with a laugh.

Kyle Klingman, director of the National Wrestling Hall of Fame in Waterloo, Iowa, said Schamberger’s work is a “huge part” of the hall of fame’s museum, which has helped the nonprofit “step up” its game. The two connected roughly three to four years ago after Klingman invited Schamberger to the annual George Tragos/Lou Thesz Professional Wrestling Hall of Fame weekend.

Klingman said Schamberger’s work “captures the essence of these professional wrestlers,” such as the “piercing eyes of Lou Thesz,” thus making Schamberger a “perfect fit” to take on the task of a WrestleMania series.

“When you look at someone who understands how to capture history, capture the essence of a moment, that’s Rob Schamberger,” Klingman said.

Because he anticipated turning these works into a merchandising effort with WWE, the depictions had to feature wrestlers or managers who have a “current working relationship with the company.”

“(There are) some past wrestlers that I can’t have on there right now, which is a bummer,” Schamberger said, “but it also kind of lets other people have the spotlight too.”

For example, the TLC match from WrestleMania XVII is symbolized with a ladder because the Hardy Boyz and the Dudley Boys don’t have such a relationship with WWE.

Schamberger currently partners with the wrestling industry’s No. 1 company, selling work through WWEShop.com.

Gerry Brisco, who met Schamberger at the Dan Gable Wrestling Museum, said Schamberger had asked him for advice to create a relationship with WWE.

“(Rob) had to get in the eyes of the company because he’s such a talented young man,” Brisco said. “He sent some work (and) worked out a deal and next thing I know, Rob’s going to WrestleMania.”

Schamberger’s now two-year relationship with WWE formed through that introduction to Brisco, as well as Jim Ross at a hall of fame weekend. Schamberger said he “had been on WWE’s radar” in the sense that the company was a fan of his work.

“They were coming to Kansas City for Smackdown about two years ago, and I reached out to Jim (Ross) to see if he could pass my information along to WWE about a charity art show I was doing for Make-A-Wish,” Schamberger said.

But Ross, according to Schamberger, “took the extra step” and started calling executives to tell them they needed to work with Schamberger.

Brisco said he has received artwork of himself over the years, but had “never seen anything” like Schamberger’s.

“Rob’s work, I mean, holy cow. That’s right up there with the best sports artists and best artists I’ve ever seen,” Brisco said.

Brisco said Schamberger’s technique stood out the most because every aspect is deliberate.

“Rob has this unique perspective and vision of how he does things, and it all blends together and … it turns out to be a masterpiece every time,” Brisco said, “and I’m just thrilled to death to be able to say very nice things about a tremendous, hardworking young man like Rob is. And honored that he painted my image.”

But capturing an individual moment or series of moments from WrestleMania is “a completely different process” from depicting a single wrestler, according to Schamberger. There was more preparation and planning, in part, because Schamberger said he wanted each painting to look different, whether through style or type of composition.

He said the medium depended on the WrestleMania and his inspiration. Early on, the more iconic moments delivered a good sense of direction, but as he delved further into ‘Mania moments, more unorthodox inspiration emerged alongside comic books, movie posters and ’60s-style pop art. For WrestleMania IX, the brat-pack flick Pretty in Pink influenced the color palette.

“That’s probably the first time that has ever been uttered,” said Schamberger, who drew inspiration for his WrestleMania XII piece from the “Buck Rogers” opening credits.

But it’s the WrestleMania XIX product he’s most proud of because felt that he “hit some kind of other level.”

“Last year, I was working with WWE’s archivist to put together the moments we were going to have in that real big painting,” Schamberger said. “When we started listing off all the moments, we realized that WrestleMania XIX really had the most, the highest number of iconic moments from any WrestleMania … When it came time for 19, I really had to step it up on that one.”

Each painting took anywhere from half a day to three days to complete, depending on its size and the materials.

Schamberger said for “the longest time” he was trying to make his way as a comic book artist and writer, but it never emerged as a full-time job. He also painted jazz scenes and pinup models, but with a multitude of artists in those genres, it was difficult to stand out.

When decided to transition into wrestling paintings, he thought there would be interest, but “had no idea” how much.

Schamberger will again be set up at WrestleMania Axxess during WrestleMania weekend in Santa Clara, Calif., just outside of the superstore, where he will paint a portrait of Randy “Macho Man” Savage on ring canvas provided by WWE.

And as far as the ‘Mania series is concerned, Brisco said he has not asked to see any copies before they are all revealed.

“I want to be like everybody else. I want to be knocked off my feet, and I’m sure I will be,” Brisco said. “I’m really proud to have something to do with getting his talent out there.”