The Road Is Jericho a DVD worth traveling

Chris Jericho has a special place in the hearts and minds of wrestling fans and journalists. He is a dream to interview, has had more amazing matches than you can count, is a natural storyteller, and his books are great fun. So it should come as no surprise that the WWE’s latest DVD release, The Road is Jericho: Epic Stories & Rare Matches From Y2J, continues the trend of most things Jericho-related being something special. 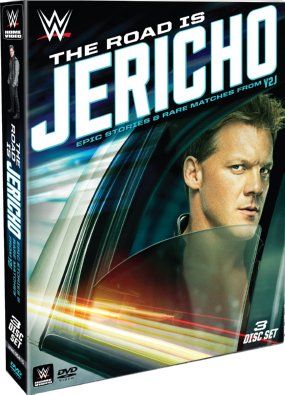 As any long-time collector of WWE DVD releases can attest, at times they can be repetitive. The Wrestlemania X ladder match, and the Shawn Michaels vs. Bret Hart Iron Man Match are just a couple of examples that can be found on multiple DVDs from the past decade or so. This Jericho DVD promises rarities and in that it delivers.

Some of Jericho’s biggest feuds — Dean Malenko, Rey Mysterio, Shawn Michaels, and Triple-H to name a few — are featured on the three-disc set. Instead of going with the obvious bout, like Jericho vs Michaels at Wrestlemania XIX or their Ladder Match, or against Hunter when Jericho briefly won the belt in 2000, instead we get matches that for the most part have not been on DVD before and possibly forgotten amidst the many matches that he’s had with the participants. Jericho faces Michaels in a Last Man Standing bout from London, England, in November 2008, and it is a Smackdown bout to challenge then-champion Hulk Hogan between Hunter and Jericho that is selected. Some other rarities include the UK-only Rebellion 2001 WCW title match against Kurt Angle, Raw matches against Steve Austin, Edge, and Rob Van Dam and an added bonus of a dark match Street Fight against John Cena.

Between the matches are short interview segments with Jericho filmed in a limo driving from New York to Pennsylvania between Fozzy concerts. This is an enjoyable aspect to the DVD as Jericho shares memories, and in many instances admits he actually doesn’t remember the matches or hasn’t seen them since they happened. From sharing the brutal travel experience to do the UK pay-per-views to thoughts into his feuds, Jericho provides insight as only he can.

So we’ve established that the DVD does fulfill its promise on the cover of rare matches, but how are the matches? Do you really have to ask? As one of the best performers of the last 25 years, The Road Is Jericho adds to his legacy with a reminder of just how good Chris Jericho has been. There isn’t a bad match on the set. Some are more familiar to recent fans — the 2012 Extreme Rules Chicago Street Fight with CM Punk, and fall 2014 matches with Bray Wyatt and Randy Orton are all pretty recent, but overall it is matches that we may have seen, enjoyed, and forgotten about over the years. Reliving them now is a treat and a reminder of some of my favourite angles and memories from being a fan of Chris Jericho and wrestling.

Although it doesn’t have a documentary, the 2010 Jericho set Breaking The Code: Behind The Walls of Chris Jericho did. Sometimes a match compilation is enough.