Kansas City artist Rob Schamberger has been a wrestling fan all his life, but recently he decided to embark on perhaps his most ambitious art project yet: creating paintings of every professional wrestling heavyweight champion of the world, including promotions such as the NWA, AWA, ECW, WCW, WCWA/USWA, TNA, ROH, and WWWF/WWF/WWE. 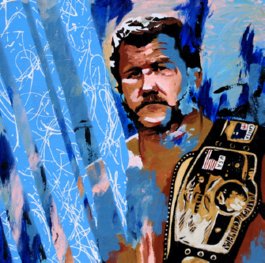 A fan since 1998, Schamberger was first exposed to professional wrestling at his mom and step-father’s house when he was flipping through channels and landed on WCW. One Ric Flair promo later and he was instantly a fan. He would later attend the 2000 WCW Slamboree pay-per-view at the Kemper Arena in Kansas City, Missouri, which was highlighted by a Triple-Tier Cage match for the WCW Title between Jeff Jarrett, David Arquette, and Diamond Dallas Page. He can be seen on camera talking to his friend.

Schamberger’s art background after high school mostly consisted of mentoring/working as a peer with other artists. “I didn’t have the option to go to college so I fell right into having to work. I got more into writing than art, due to the time demands that art has as well as the financial demands,” he told SLAM! Wrestling. “I then slowly got back into art, and then it totally took me over. I’ve been focusing more on the gallery scene for the last half-decade, doing pretty well with that. I’ve also gotten into doing street art and murals in the past year, which has caused my work to grow by leaps and bounds.”

His first major collection was a series of illustrations of jazz musicians. Schamberger later followed that up with large recreations of vintage album covers, which resulted in his first solo art show. “I’ve been very fortunate to have a number of solo shows as well as group shows. My work has been hung somewhere every month for almost four years straight now. I was a featured artist for the University of Kansas’ public art initiative, which did great.” 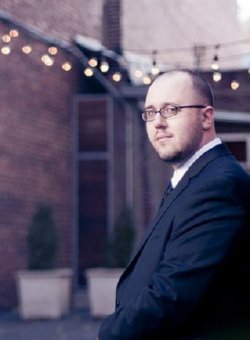 In terms of art influences Schamberger cited Pablo Picasso first and foremost as the artist that was most influential on him. He found that it wasn’t just the style that Picasso employed, but also the fact that Picasso experimented with his art throughout the course of his life. “He’s one of the greatest gifts humanity has ever received. I’ve also been influenced a lot by contemporary artists like James Jean, Tomer and Asaf Hanuka, and David Choe. Lately I’ve been drawing a lot from the global street art scene, like C215, Stinkfish, Vhils, Triangulo Dorado, ROA, and lots more.”

Schamberger has also been heavily exposed to comic book art, including the work of Jack Kirby, Will Eisner, Alex Toth, Milt Caniff, Sergio Toppi, Moebius, Jim Mahfood, and Phil Hester among others. In fact, Schamberger self-published his first comic book when he was 17 and actively pursued a career in comics until about a year ago. “I had my first major comic, The Believer, published by Image Comics in 2001. I wrote it, and it was drawn by the very talented Thom Thurman. I did comics on the indy scene for a while, as well as for newspapers like the Kansas City Star. My last project was a series about professional wrestling in 1970s Kansas City.” 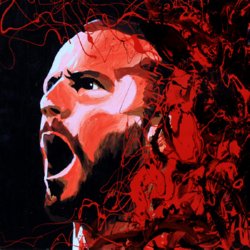 The genesis for the Heavyweight Champions of the World Art Project came about because Schamberger found he was getting lethargic creating paintings of pin-up girls. So he began to look for a new project and realized that he had done so much research for his wrestling comic book that there might be the germ of an idea there. He decided to focus on a certain segment of wrestling’s history, the heavyweight champions of the world. “I felt that there really hadn’t been any ‘serious’ artists who have really focused in on this subject matter.”

When designing any particular piece of art Schamberger described his approach as always trying to work in what is needed to generate the ideal result. “For the longest time I primarily worked with ink and watercolors, but my more formal stuff has primarily been acrylics. Lately I’ve been having a lot of fun integrating street art techniques and tools like stencilled spray paint and paint markers into my pieces, giving them a fairly unique appearance.” 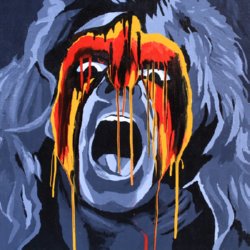 When deciding on a color scheme for his paintings Schamberger has found that sometimes he goes with colors that go with the wrestler’s persona and other times ones that will work best with the composition. “The Flair one? That’s what I had the best range of colors for with the spray paint I had on my shelf! Necessity is the mother of all invention, after all!”

One of the more time consuming aspects of creating art is searching for reference material. Thankfully, Schamberger has found that Google Image Search has been a big help. “There’s more and more information coming out all of the time. I also have a lot of books and tapes that I work from. I’m also in touch with some of the older wrestlers and promoters, and I’m sure I’ll be utilizing those resources a lot during this project! I’m currently doing a painting of Fritz Von Erich and was amazed at the dearth of quality photos of him available, especially where he’s applying the Iron Claw! Luckily, I’m also fairly adept at using Photoshop and was able to restore some photos and blow them up as the ones I found were very small. Sometimes I do spend more time tracking down reference material than actually making the art!”

The heavyweight champions that Schamberger has really enjoyed painting include CM Punk, Bruiser Brody and Harley Race. “The first few I did were ones that I have a very personal connection to. CM Punk is my favorite current wrestler, Brody may be my favorite wrestler ever, and Harley Race has such a deep history with Kansas City. I also had the pleasure of drawing a picture used on Missouri Wrestling Revival’s Lifetime Achievement award for Harley, which has led to some cool upcoming announcements about my art and Harley Race that I can’t say more about yet.” 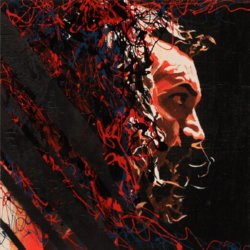 Schamberger does plan to do a painting of questionable champions such as David Arquette and Vince Russo as he feels leaving them out would feel like an omission. “The only one I’m really unsure about is Chris Benoit, for all of the reasons on both sides of the argument that you can come up with. He was my favorite wrestler until that last week of his life. I don’t know. If I did do one, I’d want to donate the proceeds to a charity like the Sports Legacy Institute, but I also don’t know what organizations would want something like that done on their behalf. It’s tough.”

Living in Kansas City, Schamberger has found has really driven the art project forward. “The NWA started in Kansas City, Ric Flair won his first world title here, Jesse Ventura got his start here, and Bob Geigel ran the NWA from Kansas City. There’s such strong memories for wrestling’s hey-day here, too. Harley and Bob Brown tried to recruit my father-in-law to be a wrestler while he was a cashier at a grocery store. My mother-in-law was Bob Geigel’s daughter’s college roommate. It’s all of those genuine connections that I love.”

Schamberger’s art project has even attracted attention from such big names as Jim Ross who retweeted about the project on his Twitter page and David Arquette who said he intends to order a painting of himself as WCW Champion. 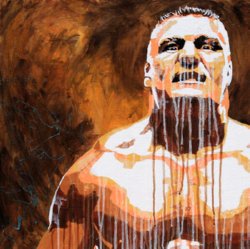 For the art project, Schamberger is trying to raise $20,000 for studio space that can serve as an art gallery. Ultimately though, Schamberger would love it if this art project resulted in a permanent display where the art could be exhibited and wrestling fans could visit and see the paintings. “I would also love for all of the paintings to be bought by folks who have a strong emotional attachment to that wrestler and treasure having it on their wall. But hey, if WWE wants to include them in their rumored physical Hall of Fame, I wouldn’t turn that down, either!”