Little Guido returns to the Extreme

This weekend, the eyes of the wrestling world will turn to Philadelphia, Pennsylvania, for the launch of a new company that looks to take the industry to the extreme. The Extreme Reunion show will see many of the top names from the original ECW roster get together to kick off the new brand. One of the stars that will be there is the Full Blooded Italian, Little Guido.

Guido (real name James Maritato) was with ECW from 1995 until the company went bankrupt in 2001. When the opportunity came up to be part of this weekend’s event, he had no hesitation in saying “si”. 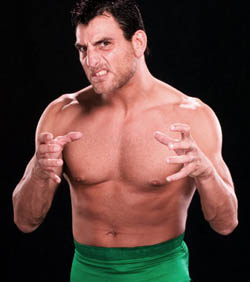 “I’m really looking forward to it,” he told SLAM! Wrestling in the days leading up to the event. “I’m looking forward to seeing all of the guys. In the wrestling business, you make good friends, but a lot of times you don’t get to see them for a long time. This is a good chance for a bunch of us to get together, have a good show, and entertain the people.”

The show, which is being held at the Pennsylvania National Guard Armory this Saturday, is certainly not the first such event. In the past, there have been several, including the popular Hardcore Homecoming events, WWE’s One Night Stand events, and even a TNA PPV called Hardcore Justice. It may be somewhat surprising that, in an industry where history is often forgotten about or deliberately rewritten, that the fan appreciation of ECW still remains as strong as ever. For his part, Guido is happy that fans do remember what the original company was all about.

“I’m amazed that (the fan reaction) is still going. You thought after the first couple that it may die down, but that just goes to show you. Now, I don’t think it will ever die.”

That’s particularly true in Philadelphia, the original home base city for ECW. While the company certainly enjoyed popularity in other markets, Philly will always have a special significance for extreme wrestling – and, in Guido’s case, also for the wrestler.

“Philly is always going to be special for me,” he said. “It’s where I got my shot, it’s where it first started for me. That’s the first place that gave me TV exposure, and stuff like that. I did the promo at the Rocky statue. Philly will always be special to me because of ECW.”

The promoters of the show – which includes ECW alumni, the “Franchise” Shane Douglas and some business partners – would seem to agree, as they’ve already announced a return date in June, even before this weekend’s show has taken place. But that’s consistent with the stated intent of the show, which is not to be a one-time reunion, but rather to act as the springboard for a new wrestling brand.

“Shane indicated that he didn’t want this to be an only a one-shot deal,” confirmed Guido. “but to be a product that will be another alternative for fans. Now they’ve announced other dates, and I really would hope to be a part of it and I think I will be. It seems that this time, Shane and the guys in the office are really pushing for it. If this brand does fly, there will be no other reunions, because we’ll all be working for this company.”

That would suit Guido just fine, since he relishes every opportunity he gets to lace up his boots (indeed, this interview took place over the phone while he was backstage at an event where he would be competing later that night).