Nutrition a passion for a slimmed down Shane Sewell

Shane Sewell has been out of the minds of wrestling fans in the U.S. and Canada ever since he left TNA, where he served as a referee. Living back in Puerto Rico, he’s embarked on a new venture that he hopes will make inroads on changing the very culture there.

A few months ago, he opened a nutrition club in San Juan, with his wife. 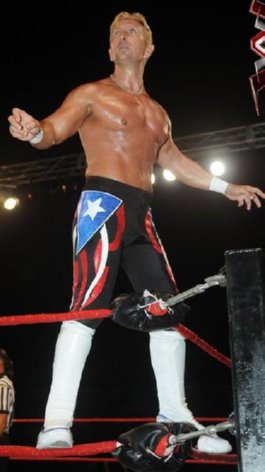 A recent photo of Shane Sewell.

“I’m trying to help people get healthy. I had a little bit of a problem a couple of years ago after I left TNA. I was in a lot of pain, my back and my neck. I really didn’t want to wrestle in TNA. That was one of the reasons I was a referee, because of the pain, my back and my knees. When I left TNA, I came back to Puerto Rico and my wife and I got into dealing with a company called Herbalife. I’ve been on the product for about a year and a half now and I feel great,” Sewell told SLAM! Wrestling.

He still wrestles on weekends, which harkens back to his early days. Born in Toronto, Ontario, Sewell trained with Sean Morley, a.k.a. Val Venis, with Dewey “The Missing Link” Robertson and Dewey’s son, Jason, in Hamilton, and would wrestle on whatever shows he could find around the province.

As “The Glamor Boy,” the buff Sewell made quite the name for himself on the Puerto Rican wrestling scene, and did so well that he never really had to follow Morley into WWE.

One thing that fans who are familiar with Sewell will notice from recent photos, though, is that he has trimmed down considerably from his glory days in the late 1990s.

“Drug free! Unfortunately a lot of wrestlers today aren’t drug free. It’s really unfair to the younger wrestlers, and I guess it was really unfair to us when we were growing up, because you look at all these guys, and they’re just so huge!” Sewell admitted.

He shakes his head at how bad his nutrition was over the years and the junk that he put in his body — and not just steroids. Fast food, for example, he slams as “such garbage for your body.”

“That’s one of the reasons I don’t hurt any more, is my body is getting proper nutrition now. And one of the big problems we have as wrestlers is, as we get older, we get hooked on these damn pain pills and a lot of us end up dying from mixing alcohol with pain pills, and then our heart stops, and that’s how a lot of us die,” he said. “I’ve been so blessed to find something that will keep me healthy and away from that road.”

Sewell hopes that he can change the eating habits of the Puerto Rican people, even a little. 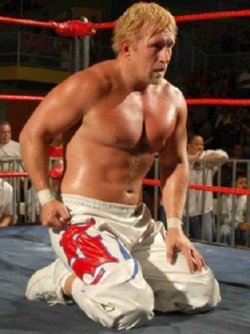 A bulkier Shane Sewell a couple of years back.

“We help people, whether it’s to lose weight, to gain weight, or just to maintain a healthy lifestyle,” Sewell said, describing what his store, Happy Hour Nutrition Club, is for. “We make sure we get their body fat percentages down, the visceral fat around their intestinal organs down, just to help them clean out. I mean, the food down here is great tasting, but it’s very, very bad for you. Everything is fried, fried plantains, fried chicken, white rice, beans, and the people drink a lot of beer down here. So the diet is not very good. There are a lot of people with weight issues.

It really struck home recently for Sewell, who was with Bison Smith when he passed.

“Look at my friend who just died, Mark Smith, Bison Smith just died before Christmastime. I was with him in the hospital as he had the heart attack and passed away. This lifestyle of the drugs and the pain pills, the alcohol, just all this shit, is horrible for the wrestlers,” Sewell said. “It’s the image that’s put out there by these big companies [that] these guys are just larger than life. That doesn’t happen by just taking protein and your vitamins. I’d guess we’ve all come to the conclusion that unless you are a genetic freak, that stuff just does not happen.” 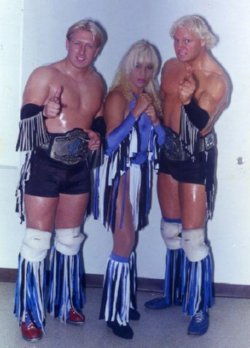 In the beginning, it was Shane Sewell, La Tigressa and Val Venis in Puerto Rico.

Contacted over the apparent death of Rex King (Timothy Smith), who, it turned out, was still with us, Sewell said that the vicious cycle of wrestler deaths gets to him. “I just wish my friends would stop dying. It seems between 40 and 50, that’s my time, that’s the guys that were around when I started. I just wish they’d stop doing this crap.”

Still, Sewell finds many ways to be happy. He and his wife, Caly, have a seven-year-old named Michael who “speaks more Spanish than I do,” he quipped.

He finds himself watching many of his friends in TNA, including the Ring ka King show out of India. Sewell said he was booked on the tour, but didn’t end up going. “I’ve been watching it on the Internet and it looks great. I love the way it looks, the production of it, and how excited — and that’s the way Puerto Rico was when we first got down here; the people used to just go crazy for everything.”

And Sewell loves to rave about Robert Roode, another Peterborough product that he helped train.

“He reminds me so much of Sean, the way that Morley used to work. Sean’s always been one of my favorite wrestlers to watch wrestle. To watch Bobby wrestle is a treat and the guy’s doing awesome,” Sewell said, recalling the early days. “He’s always been really, really nice. Man, that guy’s one heck of a worker … He definitely makes Canadians proud.”

During his stint as a TNA referee, Sewell said that Roode was still the same person he was in Peterborough, just as friendly but with loads more confidence.

“When I was in TNA, I could see, ‘Oh man, this guy’s going to be a huge star.’ But when I was training him in Canada, I would never have guessed — well, I shouldn’t say that, because he was talented from the beginning. But there was one time he came down to Puerto Rico, and he was doing an interview. Some of the local boys were trying to rib him about something while he was doing the interview. He just stopped the interview and he started yelling at the guys, that he’d really never met before.” With that reaction, Sewell said that Roode proved to him that he took his craft, and himself, seriously.

Shane The Glamour Boy a star in Puerto Rico