At the WWE Hall of Fame ceremony on March 30th in Miami, the Four Horsemen faction of Ric Flair, Tully Blanchard, Arn Anderson and Barry Windham, with Dillon as the manager, were inducted.

“It was like turning the clock back 25 years. When you’re out there with Ric Flair and listening to his speech, and he quoted his wife, saying ‘When are you going to grow up?’ The answer is ‘I really never thought much about it.’ That’s how he’s lived his life,” Dillon said. “He was out there on his own and the rest of us followed and I had a wonderful time. I look back and I have no regrets. And a quarter of a century later, when we receive the honor of being inducted into the Hall of Fame, it just doesn’t get much better than that.” 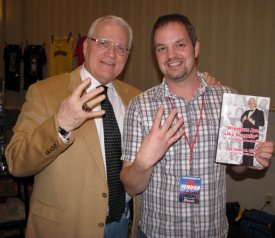 J.J. Dillon, with his WWE Hall of Fame ring, poses with vendor Doug Campbell at WrestleReunion 8 in Toronto. Photo by Greg Oliver

It’s been almost a month since the Horsemen were inducted into the WWE Hall of Fame. But Dillon remembers it like it was yesterday. Of course, he also has a constant reminder around his finger — a massive induction ring that he had to have resized.

“As I reflect back, one word that keeps coming to mind is surreal. I’ve had a storybook career. I’ve been very fortunate to have all the talent in the world. But you have to have a lot of luck too. I’ve had both,” Dillon said. “The Horsemen was all about just being in the right place at the right time. To be inducted into the Hall of Fame goes beyond the things that you even dream about. Even after I got home, I just took some time by myself in a quiet room, and I was just staring at that beautiful ring and just realized that it really happened.”

Dillon wrestled for decades, before the Four Horsemen concept ever came about. By the time the faction was born in the mid ’80s, he was mainly utilized as their manager, but would occasionally lace up his boots again for certain multiple-man matches such as War Games. Dillon’s later years in the business were spent in the head offices of both WCW and the WWE, and he was also very active behind the scenes in both companies, so it might not have shocked anyone if he were to be inducted alone. However, he was thrilled to be included in the induction of the Horsemen and wouldn’t have had it any other way.

“My success that I’m best remembered for is when I was with the Horsemen; it was the pinnacle of my career,” he said. “It’s fitting that if I go, we all go, and they could have gone without me too. The fact that we went in as a faction was a good thing and a good feeling after all these years.” 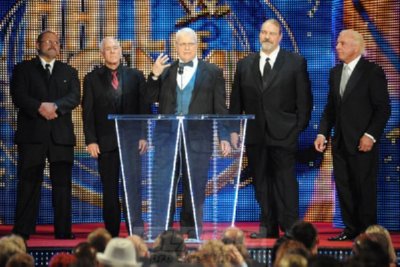 J.J. Dillon at the podium at the WWE Hall of Fame ceremony at WrestleMania 28 in Miami. Photo by Mike Mastrandrea

Dillon just recently attended the eighth edition of WrestleReunion in Toronto. As he thought about his recent WWE Hall of Fame induction and just looked around the room, he got a little emotional and said that the fans are the real people to thank, because without them, none of his accomplishments would have been possible.

Dillon really enjoyed reconnecting with his fellow Horsemen at the Hall of Fame ceremony, and wishes he could relive moments like that in the future.

“When I actually got to Miami, and started to feel the buzz, I thought ‘This is it. It’s really going to happen,'” Dillon said. “It was beyond my wildest expectations. We (Horsemen) don’t get to see each other as much as we would like. We had a genuine friendship, but we all went our separate directions, which is just the nature of life.”