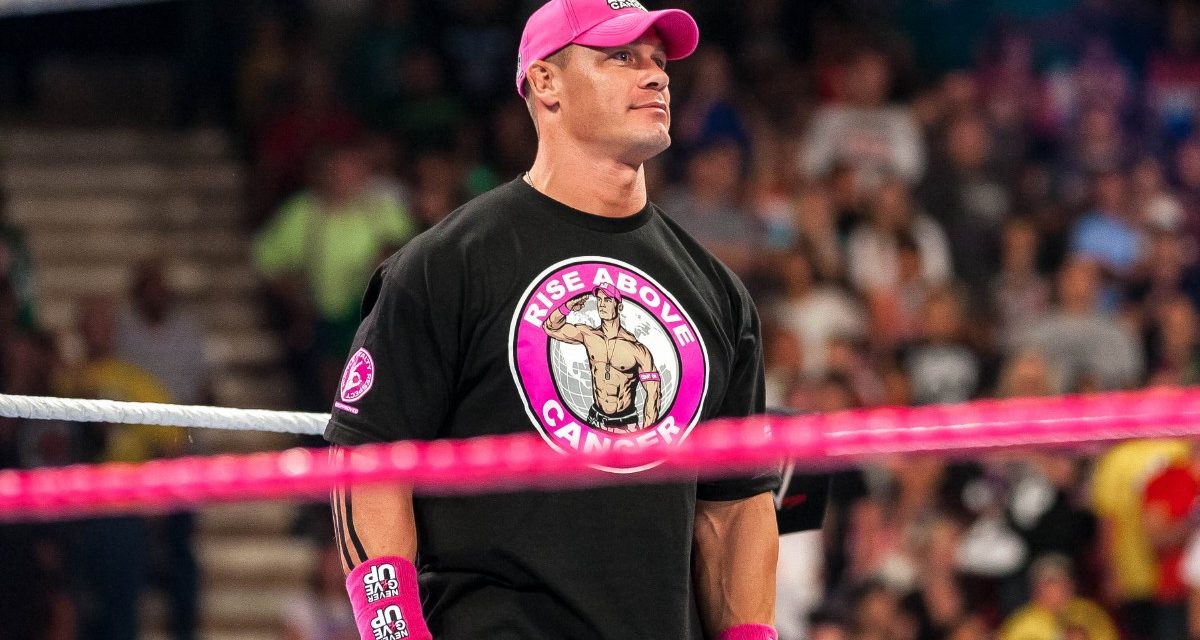 DETROIT — Every so often, you hear about something really fun happening following a taping of WWE Monday Night Raw.

Monday was one of those nights in front of a sold out crowd at Joe Louis Arena.

After the live show went off the air and the dark match was complete, a certain music hit which we have not heard in quite a while.

That’s right, Vince McMahon was here in Detroit, creeping out from behind the curtain, and he was here to wish John Cena a happy birthday.

After Cena and CM Punk beat Kane and Chris Jericho in the dark match, McMahon came out, followed by the entire locker room, then Triple H, creating an impressive array of talent on the ramp.

In the ring, Punk helped emcee the event, with Jericho watching from the announce desk with Michael Cole and Jerry Lawler.

In the ring, Punk was surprised Triple H was even there still, and Hunter noted you can usually hear his tires screeching in the parking lot the moment the show goes off the air, but he stayed for this because it was important. The roster and the fans then sang Cena happy birthday with Triple H holding the microphone in front of different people during the singing. 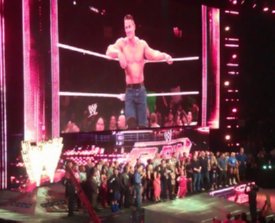 After the singing was done, Triple H wanted an encore, only he wanted it from The Great Khali, who rather humorously sang Cena happy birthday as only Khali can. It was pretty funny.

Triple H explained that since they didn’t have a cake for Cena — and knowing wrestling history, that’s probably a good thing for him — he sent all the Divas down to the ring, including Hornswaggle. All the Divas greeted Cena with a kiss on the cheek, leaving Cena with lipstick marks on both sides of his face. Hornswaggle entered the ring, only to be called back by Triple H.

Back at the top of the ramp, Triple H explained there is nothing funnier than watching Hornswaggle run down the ramp. So Hornswaggle removed his track suit, did some limbering-up exercises and ran down to the ring, greeting Cena with a big hug.

As his birthday present, Triple H asked that the Divas dog pile onto Cena, which they did, and Punk threw Hornswaggle on top for good measure.

Cena got the microphone and thanked the fans for staying through a long show, while also asking for some of the liquor Punk got in the basket from Jericho, noting it was his 21st birthday and he wanted to have a few to celebrate. Cena thanked the fans for coming and then he and Hornswaggle exited the ring and, along with Jericho, all dog piled on Cole, obviously catching him by surprise and taking him down.

A very fun scene, all told, and hopefully WWE puts it on the internet for everyone to enjoy.

The crowd was very into most of the show, with “YES!” chants proliferating before and during the event. All the usual people were very over, no surprises here, but Edge got an absolutely monstrous reaction when he came out.

In the dark match, Antonio Cesaro defeated JTG in about six minutes with what can best be described as a modified Styles Clash.

When Scott Stanford and Matt Striker came out to announce Superstars, ring announcer Justin Roberts started announcing “Scott Stanford and Josh Mathe…” and stopped, correcting himself when he saw Striker in place of Mathews. In retrospect, this was because Mathews was stretchered out after taking a beating from Brock Lesnar during the show.

For Superstars, Maxine faced Kelly Kelly and in the main event, The Miz took on Alex Riley.

All-in-all, one of the more fun shows I’ve been to. Things did drag a little bit at times (the show clocked in at more than four hours total), but they incorporated a lot of fun things into the show to keep things fresh.

WWE will return to Detroit on Dec. 26 for the Raw Holiday Tour.