Return To The Cobo a photographic treasure trove

The 240 pages of This Saturday Night II: Return To The Cobo take the reader on an amazing multi-year photographic journey through The Sheik’s home turf, Big Time Wrestling, in and around Detroit.

Starting in 1971, photographer Dave Burzynski began taking the unique photos that appear in this album, a sequel or sorts to an earlier Detroit wrestling photo album, This Saturday Night, which was also published by Brian Bukantis’ Arena Publishing Inc. 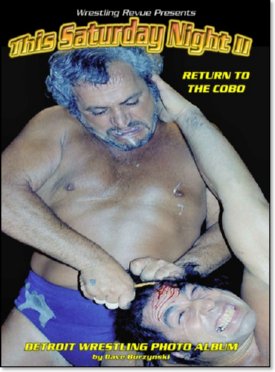 Burzynski and Bukantis go back many years, having crossed paths often during the course of their involvement in pro wrestling in the Detroit area.

Dave Burzynski eventually found himself a ringside photographer and writer for the official Cobo wrestling program Body Press, Brian Bukantis, by way of Arena Publishing, became somewhat of a rogue reporter, writing producing and selling, the “unoficial” Detroit wrestling magazine Arena, which was sold outside the doors of the arena, every other Saturday night.

Some of Bukantis’s writing appeared in those long unavailable copies of Arena, and this is where the friendship between both men really started.

Bukantis then became the photographer, writer and producer, of The Stranglehold program for a competing Detroit promotion. Burzynski eventually followed his dream, leaving the photography/journalism field, to become a full-time wrestling manager as “Supermouth” Dave Drason.

Thus each man went his own way pursuing their ambitions and goals.

Fast forward to 2005, and both men again crossed paths. Bukantis had acquired the archives of Wrestling Revue and The Wrestling News.

The first person he contacted was Burzynski. Neither had much regard for today’s “sports entertainment” and the enjoyment that they got out of wrestling from back in the day when it was old school had remained somewhat subdued.

They were able to bring those memories back, during the period of the newly-revived Wrestling Revue, with Burzynski contributing his very popular “Cobo Confidential” column. The biggest hardship he had was turning off all the memories that would come back to him.

In early 2010 both men were involved in the documentary, The Sheik — Wrestling’s Greatest Villain, a tribute film, produced by Independent News Service.

Asked about photos of The Sheik, Burzynski said they were missing in action, and it was doubtful that he would ever find them.

But in early 2011, there was a breakthrough, and Burzynski immediately called to let Bukantis know that he’d found the motherload of his photos, stored away in unlikely places, including the many negatives and prints that he thought were lost forever.

Thus it was decided, the only way to present them, would be a second edition of This Saturday Night.

It was worth the wait. Burzynski, with his old friend Bukantis, has assembled a truly wonderful wrestling photo album, and it’s a large book, on 8-1/2×11″ paper.

They needed the bigger stock for the whopping 334 outstanding pictures of wrestling stars that appeared for The Shiek during the 1960s and ’70s.

Many shots have been taken close-up of gashed foreheads, and the detail in in facial expressions of the wrestlers on these pages is eye grabbing,

Under each photo, Burzynski’s memories of the moment are recorded in two or three sentences.

Having been a wrestling photographer myself, also in the ’60s and ’70s, it can be stated that when the blood flows, a dedicated cameraman will try for the closeup head shots — and when he presses the camera shutter, it is an adrenaline rush, knowing that the shot is in the bank,

The talent that appeared in The Sheik’s territory was of top calibre, including the managers of note who worked at The Cobo: Abdullah Farouk (Ernie Roth, later The Grand Wizard in WWWF), Crybaby George Cannon, Eddie Creatchman and Ivan Kalmikoff.

Some of the pictures that Burzynski took behind the scenes were never meant to be seen by the public. A great example is a posed picture of The Sheik and Sam Muchnick congratulating each other on running two top wrestling territories in the National Wrestling Alliance.

Other posed shots stand out, including a more recent one of Burzynski visiting former wrestler Luis Martinez in a nursing home in Chicago.

Two others show a young Burzynski posing with Ox Baker in the early 1970s, and another of them together at a charitable event in Chicago — 40 years later.

Some of the great wrestling feuds that took place in Detroit are captured on film by Burzynski’s camera lens, and presented in all their glory on many pages of this exciting publication.

The mighty midgets are not overlooked either, with 11 pictures of such standouts as Sky Low Low, Jamaica Kid, Joey Russell, Little Tokyo, Frenchy Lamont and Little Brutus.

Perhaps one of the top feuds was between The Shiek and regular opponent for his U.S. Championship, Bobo Brazil. They spilled buckets of blood during their ring wars.

Another earlier opponent at The Cobo was Mark Lewin, which brings me to my own story. This writer covered a matchup between the two in 1967 at a soldout Cobo, I had been let in to the inner workings for this show, by my friend Al Costello. After their match, in a hallway between dressing rooms, I could hear Lewin yelling at The Sheik over something that had happened during their match. Suddenly The Sheik appeared in the hallway, and it was just him and I. He fixed an evil stare at me, and told me that I had better keep my mouth shut, and forget what I’d just been privy to.

Burzynski has also included a lot of wrestling memorabilia for the book as well — 23 wrestling advertisements that appeared in newspapers promoting wrestling shows at The Cobo, as well 29 wrestling results tears taken from the newspapers, along with several copies of super card posters.

In the days of kayfabe wrestling, fans of Big Time Wrestling got action, lots of blood, intense rivalries, as well as much to talk about with other fans, until the next great wrestling show, would take place at The Cobo — you guessed it — on a Saturday night.

Much of this action has been captured by a young man at the time and the result is a visually exciting wrestling photo album, which is enhanced by the 40 years of memories from Burzynski, who did achieve his goal of becoming a manager in the wrestling business. He is still involved with many oldtimer events today, including the Pro Wrestling Hall of Fame and the Cauliflower Alley Club.

For those who enjoy top wrestling photography, as well as the cameraman’s own insight of each picture displayed, this newest edition of Saturday Night At The Cobo is a must.