Author’s love of Macho Man turns into a novel

Nathaniel G. Moore has switched gears, but is still into the Macho Man. The Toronto artist and writer has gone from organizing a very successful art show in honour of the late Randy Savage in November 2011 to a just-published novel, Savage 1986-2011. 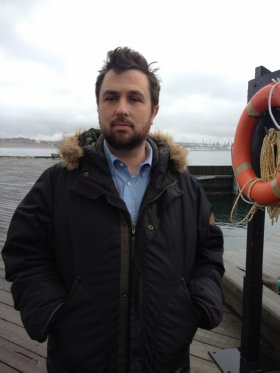 The development of Savage 1986-2011 took place over a 12-year period and is one that is extremely personal to Moore, as it’s autobiographical in nature.

“Bits of it have appeared in magazines dating back to 2001, but most notably in 2003’s Career Suicide!, an anthology of humour writing published in Montreal,” Moore told SLAM! Wrestling. “That piece got me on CBC’s ZeD TV, which included clips of me as a backyard teen wrestler, and a picture of Randy Savage and myself — split-screened, I never met him — in my intro.”

One person who has seen Moore’s novel develop over the years has been author Spencer Gordon, who last year had his collection of short stories, titled Cosmo, released.”I’ve seen a lot of mutations, deformities of what’s now called Savage 1986-2011,” Gordon explained to SLAM! Wrestling. “I’ve seen it moult its short story origins to become a sprawling novel, watching its claims to fiction dissolve under the strain of autobiographical necessity. There’s really too much to say on the subject of evolution, but if I’m pressed to summarize the process, Nathaniel played with elements of perspective and voice most vigorously throughout, trying on various first- or third-person hats, using a stand-in — once the beautifully-named Ricky Galore — before finding a more receptive medium in non-fiction: a simulacrum of his own lived experience growing up in Leaside, of finding and losing friendship and love, and all the dark matches in between.”

As his work on the novel continued, Moore decided that the autobiographical story that he wanted to tell would be juxtaposed against the career of Randy Savage from the first time he saw him live at a match in Toronto, in 1986, until Savage’s death in 2011.

“It was an organic editorial and creative process,” said Moore. “At some point, perhaps after viewing the film The Assassination of Jesse James by the Coward Robert Ford a few dozen times, I thought about the fanaticism, the hero and interior hero as a narrative arc for Savage.”

For the novel, Moore made a deliberation choice to not only depict himself with a great deal of depth and dimension, but all the other figures within the story, regardless of whether they had a major or minor role to play in it. The reasoning behind this decision was that the overall story within the novel would span a 25-year time period and most of the characters would be a part of it all the way through.

“I wanted the book to act as a partial family tell-all, but with a greater sophistication and objectivity,” explained Moore. “The most difficult figure in the novel to write was the parents, simply because I never wanted them to be cast as pure evil villains. I wanted them to be sympathetic and human.”While Moore as an author already has several novels under his belt — including Wrong Bar, Pastels Are Pretty Much the Polar Opposite of Chalk, Toronto Noir, and Let’s Pretend We Never Met and Bowlbrawl — writing Savage 1986-2011 has had its own unique challenges.

“I stopped over long periods of time, sometimes up to a full year without writing anything,” relayed Moore. “It took the last five years to come up with an ending, and when Savage died, it seemed the perfect place for the book to end. The family saga continues, fictionally, but the book ends in May of 2011.”

When asked as to whether or not he felt that the novel had evolved in any ways that surprised him, Gordon, whom Moore had advised him on the manuscript, said that he never really knew what was going to have a lasting resonance and appeal.

“Nathaniel is always working on something new; he never sits; as a writer that makes him most shark-like,” described Gordon. “I’ve seen him take up and abandon a slew of projects while he was tinkering with Savage 1986-2011. I can never tell what’s going to stick with him. These projects include short story collections, poetry collections, novellas, e-books, joint-venture-poetry collaborations, and even other novels. The fact that Savage made it through the Moore machine is a testament to its lasting neurological and emotional appeal, but it’s also always a surprise to see what ‘sticks’ with the author.”

As to his role with regards to Savage 1986-2011, Gordon stated that since Moore is semi-blind physically, his main contributions in the early stages of the novel’s development was line-and-copy edits. However, to further explain the process used by the author, Gordon went on to say that he believed that Moore’s brain works extremely quickly, and that sometimes he forgets to fill in the gaps that the average reader needs in order to grasp the full impact of a scene, or line of dialogue, or a transition. 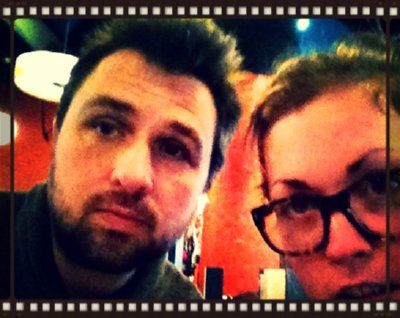 The author and his partner, Amber.

“I was happy to conventionalize, iron-out, and bridge a few of the confusing elements of the earlier drafts,” said Gordon.”Contributions on the level of plot and direction are now mythic, part of our ongoing conversations about life and losing, about competition and triumph, and I’m not sure if I can summarize them for you, other than to say that yes, we worked hard at finding the right finish.”

Even though the focus of the autobiographical novel was on the protagonist Nate, Moore did do a degree of research into Savage’s life from 1986 to 2011.

“I hired someone to transcribe his 911 call, but that was cut,” elucidated Moore. “I had so much in my head from my youth in regard to Randy that I just let it all come out; each memory, each match, what I was thinking and feeling and how I absorbed the wrestling fantasy world into my own fantasy world.”

By using Savage’s career as a touchstone throughout the overall story, Moore had to decide what aspects, and to what degree, he would reference it in the novel. He ultimately decided on an approach that would stay true to the Randy Savage legend, but he did admit to feeling thwarted by the WWE Hall of Fame and the Stephanie McMahon rumour. (For those not aware there has been a persistent rumour over the years that there was some incident involving Savage and Stephanie McMahon that played a role in his departure from the WWE back in 1994. While no confirmation, denial, or details have ever leaked, several years ago there was purported to be a strange video in which Savage is reported to be talking about how he was going to come take Stephanie McMahon away from her husband Triple H.)

“I thought it was more interesting and more Roch Carrier-like (The Hockey Sweater) to have a large portion of the fandom be based on an internal relationship and my experience, from afar, seeing Savage live five times,” explained Moore.

While Savage 1986-2011 is an autobiographical in nature Moore admitted to there being some fictional elements.”It’s an assumed memoir with some fictional asides. For example: I don’t have an older sister. Certain dates were changed for dramatic purposes. Think Man on the Moon, the Andy Kaufman film.”

In terms of the literary influences with regards to the writing style he utilized in the construction of his novel, Moore admitted that the Greek myth of Hercules was a definitely one because of its themes dealing with domestic tasks and insanity.

“Hercules was the original poster boy for domestic unrest,” stated Moore. “However, because of the wrestler Hercules, I didn’t want to start name dropping and cross referencing the situation. I didn’t want to beat people over the head with symbolism and out-sourced metaphor.”

While Moore acknowledged that for his past novel Let’s Pretend We Never Met that the Latin poet Catullus was a big influence, surprisingly Ovid was not despite some of his writing prose at times being reminiscent to Ovid’s flowing descriptive approach. However, there were several other authors that did have an impact on him as both a writer and an author.

“Oh, authors that influenced me: Steel Chair to the Head, edited by Nicholas Sammond is the best book written on wrestling, period,” Moore emphatically expressed. “Michael Turner’s novel The Pornographer’s Poem, Greg Oliver’s wrestling books, Michael Holmes’ Parts Unknown poetry collection, Rebecca Godfrey’s The Torn Skirt, Spencer Gordon’s story ;Jobbers’ a great wrestling-themed short fiction piece from his collection Cosmo — it’s a story you find yourself reading in the New Yorker, realize it’s about wrestling, but keep reading because you enjoy it so much — Kathy Acker’s Blood and Guts in High School, White Noise by Don Delillo and the poetry of Amber McMillan.”

One scoop that Moore provided to SLAM! Wrestling is that he has considered the idea of doing an autobiography on Randy Savage.

“I simply haven’t been able to find the time to even pitch that project to a publisher, but I think I could certainly do it justice; perhaps a partial oral history as well, from friends and family,” Moore said thoughtfully.

As to his hopes for Savage 1986-2011, Moore has received tweets from Hulk Hogan when he did the 2011 Randy Savage art show.”Since Hogan plays such a dynamic role in the book, through the various Mega-Power references, I’d love for him to read it. As for Lanny Poffo — Randy Savage’s brother — I would encourage him to read the book as a unique tribute to his late brother, but so far, no response.”