CLOVERDALE, BC – There’s a rich history of pro wrestling in British Columbia, and on Friday night at the historic Cloverdale Fair Grounds, All Star Wrestling honoured some of the legends of the past and did its best to present some of the stars of today. 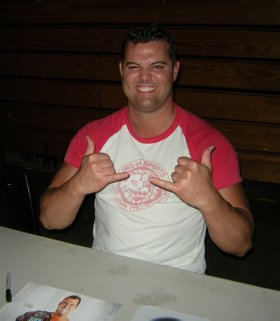 Davey Boy Smith Junior, er, David Hart Smith, er, Harry Smith — whomever he is, he is happy on Friday night in Cloverdale. Photos by Matthew Byer

Unfortunately, Morowski was unable to attend the ceremony, but fellow ASW Alumni Neil Drummond was on hand to accept on his behalf with a touching acceptance speech.

Thankfully, all of the other ASW Alumni were present for the ceremony. When Rocky Della Serra was asked to say a few words to the crowd he spoke about his particular affection for Cloverdale, a small town to the east of Vancouver.

As for the always boisterous The Iron Maiden, when she was honoured as part of the ASW Alumni class she simply exclaimed to the crowd, “It’s about time don’t you think ladies and gentlemen?”

However, the night was also about putting on a great night of wrestling and no match typified this better than the main event two-out-of-three falls match between ASW Trans Canada Champion Kenny Lush and Davey Boy Smith Junior, Harry Smith.

SLAM! Wrestling spoke with Smith about the match and what some of his plans are for the rest of the year.

“It’s going to be a longer tougher match,” explained Smith. “There’s not so much stress as it’s a best two-out-of-three falls match. I don’t have to worry about losing one fall. I’m certainly going to be in good shape for it with all my training I’ve been doing lately. Kenny Lush was really good last time. We had some good exchanges with his submission wrestling and my submission wrestling. I went to his catch wrestling club this week here in Surrey, BC, and it was good to train with his guys. I think it’ll be really good tonight and really different from the other matches, probably more submission based. I’ve been doing really well over in New Japan so I think I’ll show some of that in the ring too.”

Smith said that he would be wrestling in Japan from November 23rd to December 8th.

“It’ll be the New Japan tag team tournament,” stated Smith. “It’ll probably be the usual tag teams — Lance Archer and myself, probably Machine Gun [Karl Anderson] and a partner of his choosing. It should be a good tournament.”

Before the main event, though, the Cloverdale crowd was treated to a very entertaining series of matches on the undercard. The opening match of the night was between Disco Fury and ASW Alumni Oly Olsen. Both wrestlers employed a fair amount of mat wrestling and the match had a methodological pace that proved a good recipe for whetting the crowd’s appetite. Olsen eventually won by pinning Fury while applying an Arm Bar Submission.

From there the action moved to a Girls Gone Wrestling match pitting Bambi Hall against Raven Lake — daughter against mother. The match was a very physical affair with Lake at one point utilizing her tremendous strength to hurl Hall the length of the ring. Hall attempted to counter Lake’s superior strength by using some high-flying moves such as a High Cross Body. Alas, the outcome of the match was decided when Lake decided to bring a chair into the ring when the referee was knocked out. While Hall was able to snatch the chair away from Lake, just as she used it, the referee regained consciousness and disqualified her. To add insult to injury, Hall was attacked after the match by ASW Alumni The Iron Maiden.

The next match on the card was for a shot at the ASW Trans Canadian Championship on October 26th and was between Kyle Sebastian and Adam Ryder. Sebastian entered the ring first oozing an arrogant and cocky demeanor which repeatedly enraged the crowd. Ryder followed shortly after, and the fans in Cloverdale were treated to a wonderful match with psychology, story-telling, and death-defying wrestling moves. A good example of this was a devastating drop kick that Sebastian delivered to Ryder’s throat while he was in the corner. After a great deal of back-and-forth Sebastian got the pin, but as far as the crowd was concerned it didn’t matter who won; everyone was chanting “this is awesome” by the end of the match. 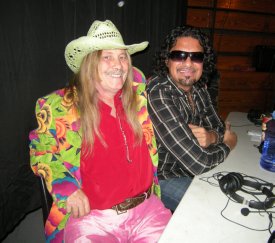 The fourth match was for the ASW Tag Team Championship and involved The Boys of Summer, Kenny Doll and Matt X-Static and The Breakers who were the champions. The early portions of the match were more of a contrast in styles between the two teams, with The Boys of Summer employing high-flying maneuvers and The Breakers using hard-hitting tactics. However, eventually, Matt X-Static found himself isolated in the ring on his own. Later on, when Kenny Doll was distracted by an ally of ASW Cruiserweight Champion Ritchie Destiny and chased him to the back, X-Static was double-teamed mercilessly including a Double Suplex by The Breakers. Under the ensuing onslaught X-Static was pinned. After the match, Kenny Doll returned to the ring and along with Ritchie Destiny and The Regime leveled X-Static until The Breakers came back out to make the save.

After the intermission, the ASW Legends Title Match between Champion Michelle Starr and The Fabulous Fabio took place. The Fabulous Fabio was accompanied to the ring by Della Serra, who interfered liberally on Fabio’s behalf throughout the match. Both wrestlers utilized the full Nelson numerous times, but the outside influence of Della Serra proved to be too much for Starr, and he was forced to submit to Fabio. However, at the end of the match senior ASW official Kevin Jefferies came out and announced that The Fabulous Fabio would be facing former WWE superstar Chris Masters, and if Rocky Della Serra interfered in that match, Masters would be allowed to put him in the Masterlock.

The penultimate match before the main event was a three-way contest for the ASW Cruiserweight Championship between the champion, Ritchie Destiny, Collin C4 Cutler and The Great Kasaki. The match was extremely quick paced with a slew of dangerous moves from the apron, and through the air that left each opponent devastated on the floor or in the ring numerous times. After a great deal of exciting wrestling, Matt X-Static came to the ring for revenge, and when the referee was knocked out, X-Static superkicked Destiny. At first Cutler tried to capitalize, but it would actually be The Great Kasaki who would get the pinfall and be announced as the new Champion. Sadly, it was not to be as senior ASW official Kevin Jefferies came out and declared to the crowd that the title would be held up due to the outside interference. However, Jefferies also stated that there would be a four-way Tables Ladders and Chairs match on October 26th between Ritchie Destiny, Collin C4 Cutler, The Great Kasaki, and Matt X-Static to determine who would be the ASW Cruiserweight Champion. 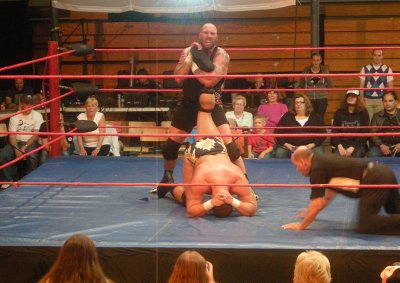 With that it was now time for the two-out-of-three falls match between champion Kenny Lush and Davey Boy Smith Junior. The build of the match from beginning-to-end was masterfully executed with many countering submission moves employed, an incredible amount of physicality, and some stunning power moves. At one point, though, the crowd began to turn on Lush when while he had Smith in the Figure Four Leglock, he illegally reached up to grab the ropes for more leverage. While Smith managed to free himself from the Figure Four Leglock later on he had to submit to Lush’s Ankle Lock giving Lush the first fall of the match.

The pace quickened even more from there and Smith eventually evened the score 1-1 by using a powerbomb to get a pinfall. As both wrestlers sought an advantage to gain the final fall, Smith decided to try for a Superplex. Lush and Smith fought for some time on the corner ropes, but at last Smith managed to execute the Superplex on Lush. However, to Smith’s astonishment Lush managed to kick out.

Lush tried for another Ankle Lock, but Smith managed to power out of it. As the tension built, Smith was able to finally put Lush into the Sharpshooter, but before anything could be decided Kyle Sebastian ran down to the ring and attacked both men. This left senior ASW official Kevin Jefferies with no choice, but to disqualify both men and declare the match as a draw. During the aftermath, Smith challenged Sebastian to a match on September 28th in Richmond, BC.

After the match, Lush shared his thoughts.

“I thought it went really good,” declared Lush. “I kind of wish Kyle Sebastian didn’t run in and mess it all up. Smith had me in that Sharpshooter and I know I would have gotten out of it. It was one fall apiece at that moment. I thought we [Smith and Lush] had pretty good chemistry from the first match we had. It’s somewhat similar styles; he trains a lot of martial arts, I train a lot of martial arts, I think that plays a lot of a big role in that.”

With regards to his upcoming match against Kyle Sebastian, though, Lush predicted a bloodbath. “I expect to bludgeon him to death,” Lush emphatically stated. “I’ll just kick his @#$. I don’t need any disqualification or anything. I’ve got my fists; I’ll just do it in the ring.”

Thus, ended an action packed night of All Star Wrestling filled with excitement, history, and thrills.