Going into the review of World Wrestling Entertainment’s newest DVD/Blu-Ray release Triple H Thy Kingdom Come, the overriding question was how open and thorough WWE would be in covering Triple H’s career and personal life. Thankfully, for the most part, this set covered almost every topic that you would hope it would for a figure as important as Triple H has been for not only WWE, but also professional wrestling as a whole.

Once again, WWE has produced a first-rate documentary which begins with Triple H’s childhood, moves into his high school and bodybuilding years, and the early beginnings of his professional wrestling career. There is even footage included from when Triple H was trained by Killer Kowalski, and of some of his early matches on the independent scene which give a hint of what he would become later on in his career. 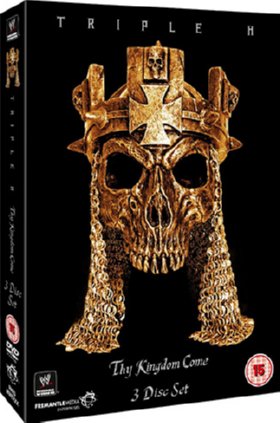 Yet, it is really in the footage of his years in World Championship Wrestling (WCW), when he was billed as first Terra Tyzing, and later Jean-Paul Lévesque, where the viewer can see Triple H starting to become a more polished performer. For this section, the WWE brilliantly intersperses footage of Harley Race with that of Triple H clearly showing the influence Race had; add to that the commentary from Race and the viewer instantly gets a true appreciation of the parallels between the two at that time in Triple H’s career.

Also, how important the mentoring Triple H received from Terry Taylor during his year at WCW is covered thoroughly with Taylor detailing in what way, and how, he went about helping Triple H improve as a performer. From there, of course, the documentary moves to the beginnings of Triple H’s WWE career and in that section there are some new facts revealed that had never been brought to light before.

For example, Triple H discusses what he believes sold Vince McMahon on the idea of bringing him to WWE from WCW. Another interesting acknowledgement is that Triple H’s early WWE persona of the aristocratic snob Hunter Hearst Hemsley was based for the most part on an Americanised version of his WCW Jean-Paul Levésque character instead of the original French one because McMahon felt it would be easier to turn him babyface later on.

The documentary, as well, covers portions of Triple H’s career that have been detailed in other WWE releases including his rise during the Attitude Era, The Kliq, the bringing in of Chyna as his bodyguard, Degeneration X, his recovery from his quadriceps injuries, Evolution, his numerous championship runs, and his marriage to Stephanie McMahon. Yet, in this release all of these subjects are given more room to breathe and the amount of commentary from various figures throughout the professional wrestling industry is quite stunning.

There are comments from The Rock, Shawn Michaels, Steve Austin, Mick Foley, Road Dogg, Billy Gunn, Sean Waltman, Vince McMahon, Stephanie McMahon, Linda McMahon, The Big Show, and many more including some very rare thoughts from The Undertaker. All of these give a new life to some subject matter which has had a great deal of coverage over the years.

As well, there is a great deal of more conversation on Triple H and Stephanie McMahon’s relationship and a lot of details on the discussion that took place in terms of the potential consequences on not only Triple H’s career, but his legacy in professional wrestling. Perhaps, though, one of the more fascinating subjects covered is Triple H’s transition to that of WWE’s Executive Vice President of Talent and Live Events. It is pretty apparent that such a change in his responsibilities and career is not without its challenges, but the documentary gives a bird’s eye point-of-view as to how Triple H copes with it that is very instructive in terms of what has been involved.

Yet, as thorough as this coverage is there are some subjects not covered which is perhaps best personified by the lack of discussion of Triple H’s past personal relationship with Joanie Laurer, best known to wrestling fans as Chyna. From what has been written over the years, the relationship was an important one in Triple H’s life, and also ended not too long before his relationship with Stephanie McMahon began. Yet, discussion on it is omitted which is a shame as its inclusion would have provided the viewer with further insight on Triple H. As well, Laurer is the only past member of Degeneration X not interviewed for the documentary.

As to the matches provided, there is a rarely seen 1994 match from WCW Saturday Night against Ricky Steamboat which has a good story, but there is only one other match from the 1990s which is a 1997 one against Dude Love. This may be due to the fact that many of Triple H’s other matches from the mid-to-late 1990s have been prominently featured on other WWE releases. Yet, there are two matches from 2000 including the iron match for the WWE Championship against The Rock, and a No Disqualification match against Kurt Angle, which are great examples of Triple H in the prime years of his career.

Additionally, one of the “Anti-Mega Powers” matches from 2001 is provided which pits Triple H and Steve Austin against The Undertaker and Kane that when viewed really takes one back to that era of wrestling. A fun 2003 World Heavyweight Championship Match against Rob Van Dam is presented along with the 2004 Last Man Standing Match between Triple H and Shawn Michaels, and a 2006 match versus Ric Flair. The latter four matches included are two 2006 matches against King Booker and Randy Orton respectively, a 2007 match versus Jeff Hardy, and a 2009 match between Triple H and Chris Jericho which gives a good rounding out of Triple H’s skills in the ring. Surprisingly, though, none of Triple H’s early WWE Title wins are included nor matches of a more recent vintage.

The Blu-Ray version includes Triple H’s Career on the Line Match against Brock Lesnar from Wrestlemania 29, several extra stories, two behind the scenes mini-documentaries on a photo shoot and Wrestlemania 29 Weekend, a feature on Triple H’s taping his wrists, a funny WWE version of The Newlywed Game called The Levesque Game, and a feature on the King of Signs.

All-in-all, with Triple H Thy Kingdom Come DVD/Blu-Ray, WWE has provided fans a pretty good Pedigree of a set, though it would have been a complete Sledgehammering if they had provided more matches and comments on his relationship with Lauer.