The recent news that wrestling will remain in the Olympics is music to 22-year-old Matt Johnson’s slightly cauliflowered ears. The former two-time high school All-American wrestler was inspired to start amateur wrestling because of Kurt Angle.

“If it weren’t for him (Angle), I probably wouldn’t be where I am today,” said Johnson.

Where he is as a person and a wrestler is a testament to the sport of wrestling and his wrestling heroes. 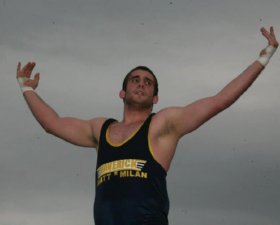 “Angle was my first wrestling hero.” Johnson continued, “He was a huge inspiration for me with him making the transition from amateur to pro so well.”

On the wrestling mats in Niagara Falls, New York, Johnson found success throughout high school and into community college wrestling. While his list of credentials is certainly impressive, it is what else he has been doing over the last nine years that stands out.

The 6-foot-4, 245-pound Johnson, who goes by the ring name “Maverick” Matt Milan, decided to pursue his passions for professional and amateur wrestling. While still in community college Johnson began training at the Kayfabe Dojo in Rochester, New York, making the hour-and-a-half trip three times a week. While that part of Johnson’s story is familiar to many in the wrestling world, what isn’t common is his devotion to his community through sport.

Starting in junior high school, Johnson began giving back to the amateur wrestling community in Niagara Falls. For nine years he has helped to train youngsters after school at various wrestling clubs and at Niagara Falls High School.

“I like giving back,” said Johnson. “I felt that as much as I learned from volunteer coaches that I should pay them back this way. I want to make the next group better and leave my sport better then I found it.” Johnson continues to train young wrestlers, including his younger brother and travels to local youth tournaments with his athletes.

With his love of all things wrestling Johnson admits that he has a long way to go. Each day after work with a local landscaping company, he spends his time working in the gym and studying tape. Not surprisingly it is the wrestling stars with amateur backgrounds and scientific styles that intrigue him.

“I try to base what I do off of the style of guys like the Varsity Club, the Steiner Brothers, Kurt Angle, Brock Lesnar and Ken Shamrock.” Johnson said. “It is also people like Rick Martel in his AWA days that I like for his technique. Then there are the great stories that he told with Harley Race in the ring.” 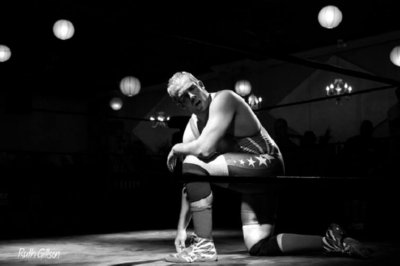 Currently Johnson wrestles a schedule of about 60 matches a year. For a guy that has an already packed schedule volunteering, it is quite a workload. Next term, Matt will be returning to school to get his degree in physical education and teaching.

“Matt is a special guy. So many guys in wrestling are jaded and expect that wrestling owes them. Not Matt,” said Buffalo Championship Wrestling promoter Troy Buchannan. “[Matt] knows that what you put in you will get out. He is realistic about the sport and that the opportunity [to wrestle in the big time] might not fall into your lap.”

Recently in front of a crowd of 250 excited fans at the Cheektowaga Legion, “Maverick” Matt Milan showed his intensity and charisma. His energetic ring style and enthusiasm for the sport were obvious. The crowd reacted positively to his performance even though he lost a close match to Bobby Saffire.

“I don’t play wrestling!” exclaimed Johnson. “I live it and have dedicated myself to the sport of wrestling.”

Whether it is working with young amateurs or in the ring with the professional stars of tomorrow Matt Johnson is anything but a Maverick. He is a man that is living his passion and preparing for his future while helping the future of possibly the next Kurt Angle.