There was a time, oh about a decade ago, that McFarlane Toys entered the sports world and changed the way that collectors like myself perceived the world of figurines. Now, the creator of Spawn is about to do the same for wrestling.

Late last week, WWE began to tease in tweets that there was something in the works with Todd McFarlane, with hinting pictures of the famed figures, leading up to a big reveal Tuesday that the two companies had joined forces.

Before anyone gets too curious, this relationship doesn’t seem to signal the end of the relationship with Mattel; rather, it seems Todd McFarlane Productions, TMP if you will, is augmenting the toys with genuine statues. The first in the new line, Undertaker, is described by WWE as being “more than 17.5 inches tall, with a special base that includes LED spotlights, a plaque highlighting some of The Undertaker’s historic accomplishments. WWE fans will be able to own a piece of history, as each statue will feature a piece of the ring skirt from The Undertaker’s Inferno Match against WWE Superstar Kane from the February 22, 1999 edition of Monday Night Raw.”

For those who don’t know much about McFarlane, let’s set the Wayback Machine to the year 2000. By this point, McFarlane had made his first foray from the world of comic books with a trio of figures dedicated to the Hanson Brothers of Slap Shot fame. The likenesses for living, breathing people were amazing, but this was only the start of what was to come. Soon, McFarlane teamed with the MLB and NHL’s respective Players Associations, and before long the leagues joined the fold, along with the NBA, NFL and later NASCAR.

The figures were uncanny — they were far more realistic than anything ever produced in the sporting world. Starting Lineup figurines, first produced by Kenner and later by Hasbro, were mass produced and looked every bit the generic part. Corinthian Headliners were slightly comical builds with inflated heads and minuscule bodies and other statuettes were simply posed. The first time I saw a McFarlane figure of Steve Yzerman in Beckett I was blown away by the realism, it was unlike anything I’d ever seen. 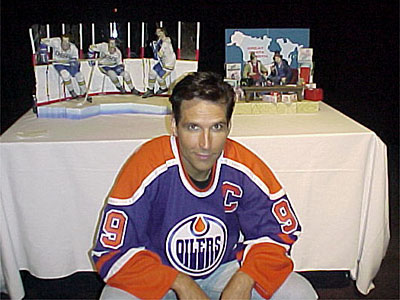 Todd McFarlane in 1999 with his Hanson Brothers set and Bob and Doug MacKenzie. Photo by Richard John

Later I would speak with the man behind the sculpts, artist Todd McFarlane. He explained to me, in an article for Canadian Sports Collector, why the authenticity was so important.

“If you collect bubblegum cards and you look at any card, everything’s there,” McFarlane told me in 2002, “and then all of the sudden, because I have to take that thing from 2D to 3D, the stick can’t be in proportion, you can’t have the logos right, you can’t have the markings? All the sudden you have to start taking away from the reality of what I see on TV and enjoy? A lot of other collectors didn’t have a problem with it but I did.

McFarlane’s point extended beyond facial scans that, at least to me, far outdistance previous WWE toymakers, including Jakks/Pacific and Mattel. Equipment from shoes to goalie masks were fully licensed from the manufacturers, giving an even more authentic feel.

But the times recently have been rough for Todd McFarlane Productions. From those early days when sports collectors would go gaga over releases, the company has slowed. One-time major retail carriers of the products have either stopped their agreements with TMP or reduced their quantities and there are constant questions on the future of lines like the NHL. Thus, it’s not surprising that McFarlane’s first foray with WWE is such a high premium offering – the suggested retail price will be in the three digits. 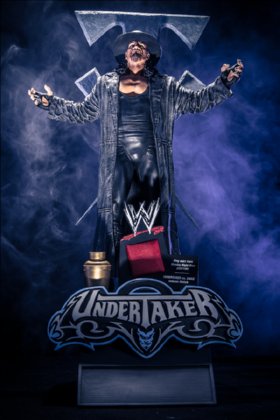 The Undertaker, in amazingly authentic detail.

Now comes the interesting part — will Todd McFarlane Productions stay in this premium category, forced there by Mattel, or will statuettes be enough of a variance from poseable WWE action figures from Mattel that later incarnations will be possible at a lower pricepoint? It remains to be seen, but certainly the market can sustain itself for two licensees. WWE collectors and wrestling figure collectors as a whole are a hearty breed and have money to spend.

For now, while we await the TMP WWE official debut, we can sit back and speculate as to what the end product will be; but rest assured with one thing — the way you look at WWE collectibles is going to change.