I want to start this by saying that this isn’t going to be a career retrospective for Jim Ross, who just retired from WWE after 20 years. If you are reading this, you probably already are familiar with his work and why he has his place in history. If you don’t, a good place to start would be WWE’s Legends of Mid South DVD… then Legends Round Table… then a plethora of WWE Pay Per View events in the 1990s and 2000s, and WCW/NWA before that. There isn’t a shortage of JR footage out there for you to study. I know — I’ve studied much of it.

I wasn’t introduced to the voice of Jim Ross until 1993. Back then, I was a WWF fan, with that product dominating what was available to me, living in Toronto. At Wrestlemania 9, there was a new face (to me at least), and he was wearing a toga. 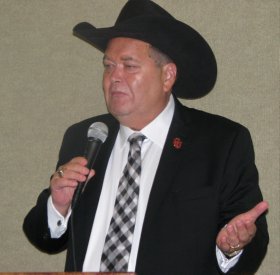 Jim Ross at the Tragos/Thesz Hall of Fame in 2011. Photo by Joyce Paustian

Let’s put this into perspective — I’ve been a fan since 1984, but because the WWF was the only thing I knew existed, I always assumed what I was watching was the best. Vince McMahon, Gorilla Monsoon (RIP).. I just took it for granted that they were the standard, or what pro wrestling announcing should sound like.

Then, all of a sudden, here comes this “new guy”…. and for me the curtain is lifted.

Watching that broadcast, I could tell I was watching something special. I had never heard pro wrestling described like that before. It was magnificent. I was learning something new with every sentence JR spoke. I found myself more enthralled by the soundtrack he laid on a match than what was happening in the ring itself. Suddenly, through him, I felt like there was a whole other world out there I had never discovered before. That’s when I started to discover tapes of other promotions, and JR’s previous work.

Years go by and JR becomes the #1 announcer in WWE. Those who followed him his entire career knew this would eventually happen (despite a couple of hiccups along the way). He is the voice of a generation. With all due respect to Gordon Solie, he is the greatest pro wrestling announcer of all time. So many others in comparison seem, to use a JR-ism, “bowling shoe ugly.”

JR was the master at describing the action in the ring, telling a story and why every move we are seeing is important. He was the perfect liaison between Superstar and fan. One thing I appreciated was his sense of humour — blink and you’ll miss it sometimes, and that was on purpose. His straight, jabbing delivery had many in stitches.

In recent years, I’ve had the opportunity to host Hall of Fame conventions such as the Lou Thesz/George Tragos Hall of Fame ceremony in Waterloo, Iowa, of the Cauliflower Alley Reunion in Las Vegas, and JR’s speeches have often been the highlight because of this.

Not only do I want to thank JR for his work, but also on a personal level. Several years ago I had no idea how to make it as an announcer, particularly in WWE. I had run into JR once at a function and gotten his contact information. I thought for days how to exactly word this email, so as not to make JR mad at me — “don’t make it too long, you don’t want to annoy him.” I thought that since WWE had a developmental league, perhaps JR would allow me to be his student, pay tuition and learn the art of pro wrestling announcing from the best. So, I emailed him, took a shot in the dark, and asked him.

He replied to me, and the first thing he said was, “I don’t take a dime of your money.” He has been kind enough to help me however he can, which is a huge honour for me. My journey still continues, and I’m very thankful that JR has mentored me during this journey.

I know I am not alone when I say this: Thank you, JR.

Thank you for being as passionate about pro wrestling as we were watching and listening to you.

Thank you for “Slobberknocker” and letting us use it in our daily conversations.

Thank you for “Good God almighty, that killed him, as God as my witness he is broken in half” which crossed over into the mainstream and became one of the most iconic calls in all of sport or entertainment.

Thank you for naming Stone Cold “The Rattlesnake.”

Thank you for signing him and for pushing so hard for Mick Foley to be a WWE superstar, as well as signing so many other present and future WWE Hall of Famers like Edge, Trish Stratus, Christian and so many others.

Thank you for your invaluable pieces of wisdom during late-night conversations at restaurants across the United States.

And finally, thank you for being the greatest pro wrestling announcer in history.