Fans in Ottawa hot for Bryan at Smackdown

KANATA, Ont. – Tuesday night was the Smackdown go-home show going into Sunday’s Night of the Champions PPV, and there’s no doubt Daniel Bryan is the guy fans want to see on top, this time more than a few minutes.

The 4,000 or so fans at the Canadian Tire Centre in Kanata, Ontario (just outside Ottawa), had to wait until the very end to see their favourite in the ring, though, as contender Daniel Bryan and WWE champion Randy Orton had a confrontation to end this week’s episode of Smackdown. 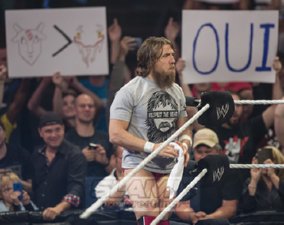 Even in French, Daniel Bryan is over. Photo by Minas Panagiotakis, www.photography514.com

Former multi-time champion and Toronto native Edge was actually asked to interview both of Sunday’s main-eventers as he brought back the Cutting Edge segment in what was without the shadow of a doubt the most heated segment/match of the tapings.

As a go-home show should be, lots of angles were presented to the fans in order to generate interest into the PPV.

Therefore, there was a six-women match between the Total Divas team of Natalya, Brie Bella and Naomi and the non-Total Divas team of Oksana, Alicia Fox and Layla, with AJ Lee on commentaries. This Sunday, AJ is going to defend her title against Natlaya, Brie and Naomi.

Paul Heyman, with Curtis Axel, addressed the WWE Universe about what could happen after Night of the Champions if Axel happens to lose to CM Punk. Sunday’s match is scheduled to be an Elimination Handicap match and if Paul E. doesn’t compete, he’ll be fired. Edge received a warm Canadian welcome in the nation’s capital, the second most cheered Superstars after Bryan.

Alberto Del Rio wrestled Ricardo Rodriguez, who was forced to switch places with Rob Van Dam, the latter being in Rodriguez’s corner for the match. Del Rio will defend his World title against the “Whole Damn Show” Sunday in Detroit.

Also, The Usos and The Shield got at it, perhaps hinting the winner of the five-way scheduled to kick-off the PPV. This match will pit the Prime Time Players, 3MB, the Real Americans, Tons of Funk and The Usos. The winners will have a title shot against The Shield on the actual PPV.

A lot of talking and less wrestling than usual in Ottawa, but since it’s the last show before a PPV, it’s something fans should expect. The last segment was particularly good and should have the fans get pumped for Night of the Champions.

It would be surprising to see WWE return to Ottawa in a near future, as fewer people showed up tonight than the Montreal house show last Friday. In Triple H’s terms, “that’s not good for business!”

Here’s a spoiler-free list of matches taped Tuesday night for both Main-Event and Smackdown.

Main-Event
Kofi Kingston vs Antonio Cesaro
Prime Time Players vs 3MB (Slater and Mahal) with Sweet T and Brodus Clay at commentary
Big E. Langston vs R-Truth
On a side note, Kingston and Cesaro was the best wrestling match of the whole night. Not a five stars match or anything like that, but a good solid match.