Watching up and coming female wrestler Santana Garrett at the May 2013 SHINE event, one could see why she is seen as “the next big thing” of women’s wrestling: her high flying athleticism combined with numerous submission holds in her arsenal impressed the small but passionate crowd at The Orpheum in Ybor City. Her love for wrestling is so strong that she wrestled on the day that also happened to be her birthday. For Santana, this was the best birthday present ever. 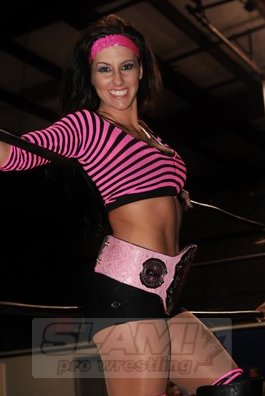 Just as outstanding as her move-set was Santana’s ability to connect with the audience: this should be no surprise considering that someone very close to her is one of the best crowd workers in wrestling history. “My roommate is ‘The Living Legend’ Larry Zbyszko,” Santana told SLAM! Wrestling a few hours before her match with Kimberly.

With this revelation, it is no surprise that this Ocala, Florida, native’s knowledge of wrestling history goes back at least four decades, despite her being hardly two decades old herself. Santana Garrett (which she sometimes wrestles under as well) is well versed in wrestling’s great past, unlike some of WWE’s new bikini model NXT recruits. During the course of the interview, she mentioned greats like Dory Funk Jr., Jake “The Snake” Roberts, and others from the ’70s and ’80s.

Although Garrett has only been wrestling on the indy circuit for three years, she is currently one half of the WOW Women of Wrestling tag team champions, with Amber O’Neal, and has had a match in IMPACT! Wrestling’s esteemed Knockout Division, during the Knockouts One Night Only PPV taping in Orlando. At that event, there were people holding up signs for Santana, and cheering her on.

“It was such an honor for me to wrestle for TNA’s Knockout Division,” she said “Wrestling [the former Knockouts champion] Miss Tessmacher was an amazing experience. Everyone treated me well backstage and it was a dream come true.”

How does one make such an impact in such a short time? Aside from her hard work and having the coolest roommate ever, she is also a second generation wrestler.

“My Dad taught me a lot about the business growing up. He used to wrestle in St. Louis and other territories, and I knew I wanted to become a wrestler, as well,” she says with pride of her Dad, Keny, who wrestles as TNT Keny G, and currently runs High Voltage Wrestling in St. Louis, Mo. “I used to watch the moves of some of the wrestlers, and said to him, ‘Hmm, I think I could do that or that,’ with my gymnastics and cheerleading background.”

As if having her father and The Living Legend as her supporters isn’t enough, she also has the nWo’s “Bad Guy,” Scott Hall, as her in-ring “mentor,” as Santana calls him.

Santana was able to meet many of the historic wrestlers at her first ever Cauliflower Alley Club reunion in Las Vegas in mid-April, which she really enjoyed attending. On the Monday night, Garrett also worked in a 10-women’s tag match. “I won the match with my shining-star press,” she says very humbly and grateful at the opportunity. “That, pretty much, was an opening to interact with everyone. Everyone was like, ‘hey, nice finish! [or] ‘Were you the one who won?'” 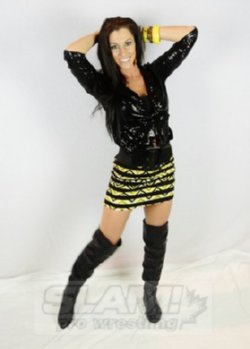 Her match at SHINE, beating Kimberly with the Shining Star Press, was one of the two standout matches of the night, with the other being Mia Yim against Mercedes Martinez.

The SHINE locker room has been nothing but supportive. “I’m surrounded by pretty established people, who have done a lot in the business. I like to pick their brains,” she revealed. As a young wrestler, most of the wrestlers she faces have more experience, and she loves to learn from them, as well. “I know that they are the veterans, and I’m just going to … go with it, and I’ll listen.”

One mentor is also a booker at SHINE, and a veteran of both WCW and TNA Wrestling: the Scream Queen herself, Daffney. Santana credits Daffney with helping her come up with a character and personality, which is so important in pro wrestling. “Before meeting Daffney and coming to SHINE, my personality was simply a country girl from Ocala,” Santana said. This wasn’t enough to take her to the next level, she admits.

Enter Daffney, who has played more characters in female wrestling than most, from David Flair’s girlfriend to Zombie Hot to Sarah Palin. Daffney saw one of her favorite DC Comics Superheroes when she first met Santana. 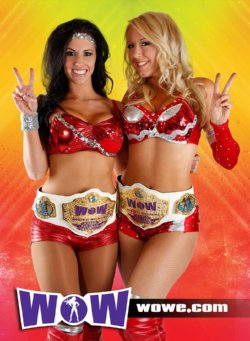 “I saw her smile and her long flowing hair, and I felt she was Wonder Woman,” Daffney said. “In commentary, I noticed her headband, and I said, ‘She was saved by her headband of power.’ Like it would give her powers to come back … and it made her superheroesque.”

Although Santana did not grow up a comic book fan, she is learning to appreciate them thanks to Daffney and others. “Ninety per cent of the girls in wrestling are into comic books and superheroes. You’d be so surprised,” Santana revealed.

Count Mercedes Martinez as a fan too. “Santana Garrett has that star look. She keeps getting better in the ring every time, and I believe that she just needs that one breakout match to shine. The fans absolutely love her and she always gives them 100%.”

Other than Daffney, Santana’s favourite wrestlers are IMPACT! Wrestling’s Tara, for her “intensity and promos,” and recent WWE Hall of Fame inductee, Trish Stratus, for her “style, charisma, and moves.”

No matter how good her matches are, for Santana, she is always aiming to outdo herself.

She does have a “Living Legend” in her corner, and the story of their pairing is worth exploring. 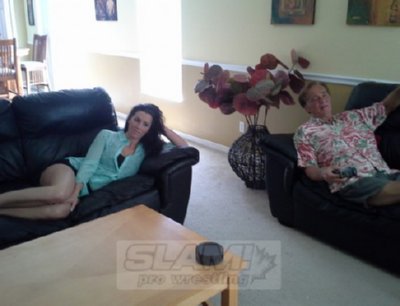 Why isn’t this a reality show yet? Santana in Larryland!

In 2010, Santana moved back to central Florida from St. Louis, where her training had just begun. She ended up at Team Vision Dojo in Orlando, where a few people knew her father, and Zbyszko and Scott Hall are among the trainers.

“I’d hang out at the house often with Larry, and everyone else,” Santana explained. “After some time, I was given a drawer, then a little closet space, and eventually I was officially moved in, and completely took over with painting walls and hanging artwork. There is seriously never a dull moment in this household.

“Hey Larry, watch my match,” she often says to her famous roommate.

And she imitates his reply, laughing, while sort of sounding like Batman’s “The Penguin: “Arrrrgh! More wrestling?!”