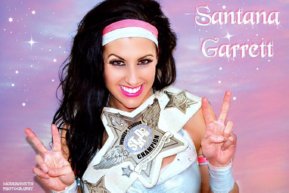 Santana Garrett wrestled Charlotte on WWE’s NXT in 2013. Shortly thereafter, she was rechristened Brittany and debuted in TNA. For the past year, she has been “killing it on the indy scene.”

Garrett, the 27-year-old Wonder of Stardom Champion, said just that fresh off her first tour of Japan, which she followed with a trip to Chile and a soon-to-be-broadcast return to NXT … maybe as Sister Abigail?

An intriguing Tweet — “Through the many years of what I thought was ‘searching’, was really the process of ‘awakening’ #WakeUp” and accompanying photo (see below) of her in a Wyatt Family-like sheep mask and white dress has talk of her being the often-referred to “relative” of Bray Wyatt.

Whatever it turns out to be, the 2014 Cauliflower Alley Club Future Legend award winner is having a great couple of years.

She told SLAM! Wrestling recently that wrestling in Japan has been a goal since her career began, along with working for SHIMMER, WWE and TNA.

Garrett, who wrestled primarily for Stardom in Japan, said everything came together “very quickly,” as she left the United States in early November. She returned to U.S. soil having made history as the NWA Women’s Champion — a title she lost Dec. 18 to Amber Gallows — and gained the Wonder of Stardom Championship, defeating Io Shirai, who she most enjoyed wrestling.

“I haven’t wrestled anybody that is at her level. She is amazing,” Garrett said. “I feel like she is a total package. She’s got the look. She can go in the ring. She never runs out of moves. She’s a fighter. She doesn’t quit. She’s, by far, the toughest opponent I’ve had.”

It was through Leilani Kai, a former NWA and WWF women’s champion, that this particular dream became a reality. Kai said she saw one of Garrett’s first matches and “was impressed with her right away.”

“I felt like Japan would give her a opportunity to learn another style,” Kai said. “She’s come so far and I felt like it was the next step for her.”

Garrett’s history-making endeavor in the Land of the Rising Sun consisted of defending the NWA Women’s Championship in the famed Korakuen Hall — the first defense in Japan in nearly 40 years — against Holidead. The last time it was on the line, Fabulous Moolah was the defending champion.

“I was blown away. To be able to wrestle in Japan is enough for me, but to be able to say I made history to be able to follow in the footsteps (of Fabulous Moolah) … I felt pretty darn good. It was surreal, to say the least,” Garrett said.

Kai said Garrett being able to defend the championship in Japan is a “wonderful achievement and great for the promotion and fans in Japan.”

“Wrestling internationally is something that every wrestler would love to experience, but very few get an opportunity,” Kai said. “It’s beneficial in every way for talent to wrestle as many styles as possible.” 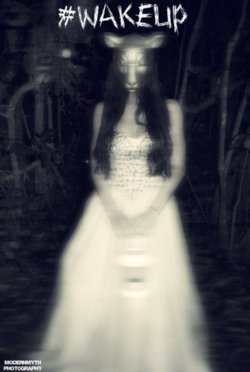 But before Garrett’s tour took her to the famed building, the Wonder of Stardom champion found herself needing to adjust to a Japanese crowd. The calmer atmosphere, with fans watching “quietly” and “just every so often” blurting out who they want to win took just one match for Garrett to adapt to.

“My first match there was very uncomfortable because I didn’t get it and didn’t realize that that’s just what they do,” Garrett said. “So after everybody told me that’s normal, then I was fine, but my first match there I was just feeling a little bit insecure.”

The Florida native took another step not too long after returning from Japan, at which time an opportunity to wrestle for Full Destruction in Chile emerged. Garrett successfully defended the NWA women’s title Dec. 15 against Dangerous Andrea on a card that featured Matt Hardy, Shane Helms, the American Wolves, among others.

“That is the best crowd that I’ve ever wrestled in front of,” Garrett said. “They were just so into everything. I have plans to go back.”

She also has set her sights on Peru and India — in the same year she ranked No. 4 in the Pro Wrestling Illustrated Female 50, just below Nikki Bella (No. 1), Paige (No. 2) and Sasha Banks (No. 3). Garrett said she was “super blown away” to be ranked so high.

“To be at No. 4 just feels so good, and it just shows that if you work hard anything is possible… I’ve proven it to the wrestling world and to get the recognition feels really rewarding,” Garrett said. 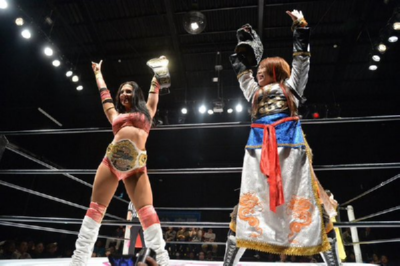 Keny G, Santana’s father who is a former promoter and manager in Florida and Missouri, said neither his daughter’s ranking on the PWI Female 50 nor her newly claimed stature as a worldwide wrestler came as a shock.

“No. 1 is Nikki Bella, two is Paige, three is Sasha Banks and No. 4 is that overnight sensation four years in the making, Santana Garrett, and she really doesn’t need any hype,” Keny G said. “She really doesn’t. When she broke the worldwide, I wasn’t surprised. I wasn’t at all.”

To reach that level, Garrett began her training at Dynamo Pro in St. Louis, Mo., while she finished her sleep technology studies at Washington University. After six months in Missouri, the Ocala, Fla., native returned to the Sunshine State and, due to her father’s connections in the industry, found a home in Team Vision Dojo.

Keny G said his daughter is “very goal-oriented” and her career has “turned out pretty wonderful.”

“She is just one of those people that sets her sights on something and goes for it,” Keny G said.

The Japan trip was Garrett’s first time wrestling outside of the country, which she said gave her confidence in her life choices. She is set to return to Japan in February.

“I feel like it was such a huge honor and I’m very, very grateful,” Garrett said. “I feel like it’s just going to lead to bigger and better things… It’s another stepping stone in my adventure in pro wrestling.”