BRAMPTON, Ont. — When you mix a beautiful day, a national holiday, and pro wrestling with a good mix of names, the result is a huge turnout at TigerFest.

The scene on Sunday was Donald M. Gordon Chinguacousy Park in Brampton, a suburb to the west of Toronto, and the holiday was, of course, Canada Day — and what a day it was. 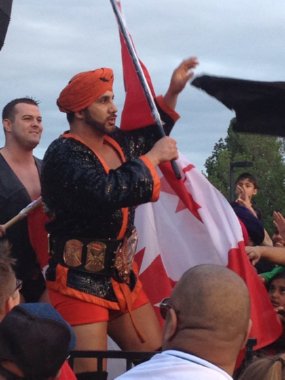 The crowd was massive, with at least a couple of thousand people watching from the bleacher seats, standing room all the way around the ring, and and thousands more up the hill outside the gated area.

Now, to be fair, not everyone turned out just for the wrestling, though it was the finale of the long day so obviously people wanted to be at the show. Earlier, there were all kinds of things to do, bands in action, even politicians to argue with. And lots of flag waving.

It started off with some of my friends from Rob Fuego’s Squared Circle Wrestling promotion. Here are the results:

2) Tyson Dux and his stable of Rhino, Big Daddy V, and Darkko interrupted Tiger Jeet Singh’s honouring of Canadian Olympian Ohenewa Akuffo. As they were about to attack, Tiger Ali Singh, Harry Smith and Sonjay Dutt ran in for the save. Dux challenged Dutt to a 1-on-1 match, and Tiger Ali to a handicap match between his men and Singh and Smith.

5) Sonjay Dutt beat Tyson Dux. After the match, Dux’s stable hit the ring. Rhino GOREd Dutt through a table, and BDV and Darkko flattened Banks and Chase who came in to check on Dutt. Tiger Ali Singh accepted the earlier challenge on two conditions: first, the handicap match be a hardcore match, and second, if he and Smith won, Singh would get Dux for five minutes alone in the ring. 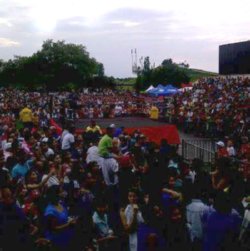 A decent shot of the crowd at TigerFest.

7) Tiger Ali Singh and Harry Smith w/ Tiger Jeet Singh beat Big Daddy V, Darkko, and Rhino with Tyson Dux. This was a crazy brawl that saw action spill out onto the floor. Kendo sticks, chairs and tables were used throughout. At one point, Tiger Jeet Singh squared off with Dux, with the legend getting the better of the exchange, throwing a chair into Dux’s face. After smashing Darkko through a table, Smith and Singh suplexed the gigantic BDV and got the win.

8) Though he was sneak-attacked by Dux’s men before they were sent to the back by referee Jimmy Korderas, Tiger Ali Singh beat Tyson Dux in the five-minute confrontation. The two whipped each other with a leather belt repeatedly, but soon Tiger had stripped Dux down to his tighty-whiteys and battered him from pillar to post before getting the pin.

In an email today, Tiger Ali Singh admitted that he needed to heal up: “Going to take a few to recoup from the bumps….that’s what you get for only working one gig per year.”

Proceeds from the show went to the William Osler Health System Foundation.

If you were at TigerFest and looking for Bob Kapur, chances are you didn’t find him in that massive crowd. You can email him instead at bobkapur@hotmail.com.