Just like the WWE, the Phoenix Coyotes dropped its “spinner” belt that was presented to the game MVP following wins. In its place is a custom-made title belt made by the triple-threat of beltmakers, Reggie Parks, Dave Millican and Rico Mann.

Parks said it was the first he had made for an NHL team, following a number of NFL belts, as well as the steady stream of titles for the WWE, UFC and even Madonna. 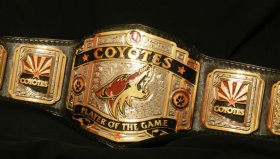 The new Player of the Game title belt for the Phoenix Coyotes. Photos (c) Dave Millican

“This is the first one that we’ve made for a hockey team,” said Parks, who grew up in Edmonton and now lives in Phoenix. “It’s got to be the first hockey team to ever have a belt to show at their games.”

The spinner belt belonged to goaltender Jason LaBarbera, who is a huge pro wrestling fan. He brought it into the dressing room at the start of the 2011-2012 season, and it began being used as a team-awarded “player of the game” award. The previous winner gets to choose the next beltholder.

“It isn’t always the guy who scores a goal or gets a couple of assists,” said Coyotes defenceman Keith Yandle, who is an assistant captain. “It could be a guy who blocks a bunch of shots or kills penalties. It could be anybody, whoever we think played the best.”

The idea is to build team unity.

“I think guys are just excited to get it after a game,” said Yandle. “It’s built a little camaraderie in the locker room. You want to play your best so you can get that belt and have the recognition of your teammates of knowing that you played your hardest that night.”

Mike Bahn was instrumental to the whole process, though the Coyotes’ strength coach has since moved on to a similar role with the U.S. Olympic Ski Team. 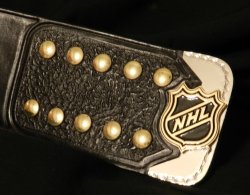 He had bought a belt previously from the Parks-Millican-Mann team, and hatched the plan with LaBarbera, Yandle and captain Shane Doan last season. The NHL lockout delayed the go-ahead, and meant it cost a little bit more for a rush job.

“As for the design, Jason LaBarbera, Shane Doan, Keith Yandle and myself looked over literally dozens of other belt designs to get ideas for what we like and didn’t like,” Bahn wrote in an email from Sweden. “We then shared those thoughts with Rico, who would draw up designs with some of his experience woven in. I’d say it was about the 4th or 5th mock up that we finally all agreed upon.”

Mann said the main template was a belt made for the NFL’s Tennessee Titans.

The finished belt, done with nickel and gold plating, to use a Don Cherry word, is a “beauty.” The Coyotes logo is front and centre, bordered by two plates that pay homage to Arizona. There are 10 spots for the “champions” from each season, whomever takes the most MVP awards, meaning a new belt will be needed in a decade. The NHL logo is at the one end of the prize.

“We specifically did not put Phoenix or PHX on the belt anywhere as we expect the team to stay in Phoenix and eventually be renamed the Arizona Coyotes,” said Bahn.

Parks delivered it to the Coyotes on March 12th. With two goals against the Los Angeles Kings, Mikkel Boedker was the first recipient of the new belt, though everyone wanted a photo with it in the dressing room.

Growing up on a farm outside Edmonton, Parks said that he skated on an outdoor rink near his one-room schoolhouse, and still has a scar on his nose from a mishap while playing goal with a scoop shovel. He hadn’t been to an NHL game in quite a while — a friend took him to a game in Edmonton, saying, “We’ve got this new kid here. He’s pretty good. You’ve got to watch him.” That was Wayne Gretzky.

The wrestling great got to hang out with the Coyotes for a while and watch the team’s victory over the Kings in primo seats.

Yandle said it was cool having Parks around.

“We didn’t want to hassle him too much. He told us his story a little bit, gave us the belt,” said Yandle. “He almost didn’t want to be in our hair much either. But it was definitely a fun day.”

Greg Oliver is the Producer of SLAM! Wrestling, but the basis of this story started with a piece for The Hockey News, the April 15, 2013 edition with Carey Price on the cover. Greg can be emailed at goliver845@gmail.com.