You asked, she answered.

Over a seven-day period, fans of WWE Hall of Fame inductee Trish Stratus were invited to ask their questions to the Toronto native. 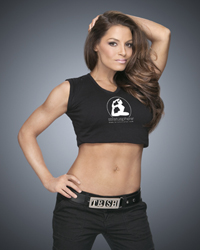 And the response was phenomenal.

Between SLAM! Wrestling and TrishStratus.com, over 100 questions flooded email boxes and Facebook pages. Everything from her in-ring career to her success in yoga was hit on.

We’ve narrowed the immense field down to 10 of our favourite questions. Here now is your Q&A with Trish Stratus.

John Wayne Landry – Do you miss the hands-on approach of professional wrestling, as in offering your input?
Trish: I’ve always been hands on with everything I do. I love that I was able to be hands on with my approach to wrestling and I wouldn’t have had it any other way. Thankfully now, with my company and brand, I’m able to be very hands on. That’s the approach I’ve taken with building my brand for the last four years.

Tabercil Whom – What lady wrestlers would you have liked to work with, past or present, EXCLUDING those with the WWE?
Trish: From the TNA girls, Angelina Love. I think she’s awesome in the ring and I think the fans would like to see Angelina Love vs. Trish Stratus. (I may be partial because I’m Canadian.) Maybe it could be Angelina vs. Nattie vs. Trish? Maybe have Sherri Martel manage me? I would’ve loved to have her manage a heel Trish. We could’ve done some awesome stuff together. If I could’ve been in the mix in the ’80s, being with Wendi Richter in a tag team and managed by Cyndi Lauper would’ve been cool. It would’ve been like Rock and Hogan!

Stephen Feldstein: Do you see yourself doing any more movies and possibly getting involved with television shows?
Trish: I’ve done a lot of reality shows between Armed and Famous, Second City’s Next Comedy Legend and eventually Stratusphere. I’ve had the chance to be Trish on TV and I’ve had plenty of guest spots. I had a couple opportunities come up but I had to turn them down. I did get the bug after my movie Bounty Hunters. I like producing moments is what it comes down to. As with wrestling, you’re producing moments and that’s what I love to do.

Brian Westcott – How on earth did you survive the brutal hardcore match you had against Victoria at Survivor Series 2002?
Trish: Good question! After watching it again recently I had the same question! I forgot how brutal it was. It was where we were at the time. It got to the point where we had to go (hardcore). It becomes part of the deal — you know when you’re going in that you’re going to be more bruised and battered than normal. Watching it back, I cringed at every moment, but I’m very proud to have had the moment with Victoria.

Steve Long – When you consider the talent of the women’s division when you were in the WWE, with yourself, Lita, Molly, Victoria, Jazz, Mickie James, Gail Kim, etc. They seem more intent on hiring models and try and pass them off as wrestlers instead of finding actual wrestlers. Is it hard to see what the Women’s Division has become since you left?
Trish: I still have hopes for the Women’s Division. A lot of people are down on it, and to be honest there is a comparison. Go back to the era where each woman could work in the ring and be unique — we were all keen to it. Remember that I was gone, then Amy [Lita] was gone then Mickie was gone, so you were really starting from scratch. I do think there hasn’t been a proper rebuilding time; if you look at the current division, you have Kaitlyn, AJ’s fantastic — she’s a firecracker, you’ve got Tamina, Nattie… you’ve got Layla who gets it. If you look at the division, it has the talent. I think we’re at a good point where you can build the next golden era.

Justin Medeiros – If WWE ever offered, would you work behind the scenes as a creative member/trainee for the current and up-coming Diva’s to improve the division?
Trish: I would love that opportunity. You saw that on Tough Enough, we were finding the next WWE superstar and Diva, and they had to bring in a woman. There’s just some stuff that we know and it was a little hit and miss out there, and it’s different than what works and doesn’t work for the men. I’d love the opportunity to work with some of the up-and-coming Divas. We had Fit Finlay — he just got it. I’m really keen to work on creative and that would be an amazing opportunity.

Eric – What was your reaction after learning that the WWE had retired the Women’s Championship to unify it with the Diva’s Championship?
Trish: A lot of people figured I’d be disappointed, but to be honest I thought it was fitting. It retired an era. I think what the women were doing at that time was a bit different than what we were doing. We represented different things at that time. The Diva’s Championship ushered in a new era, and it’s still new. I think potentially it could be built to great things, and hey, at the end of the day, it’s the one thing on my bucket list I haven’t accomplished, so who knows? Having a new division I haven’t competed in yet…

Vik – How did you pick your entrance music and what was the best part of being a heel in 2004?
Trish: I was a huge fan of Li’l Kim and when we were talking about my song, we wanted something cool, something in hip-hop. We had to decide first if we were going to go with a male or female musician, and Li’l Kim was at the top of my list. Did I think we could get her? No… then I got the news. She wrote the music, I got the chance to read the lyrics, and I thought the song was very cool. I actually get asked very often whether the giggle at the top is me or Li’l Kim… what do you think?

Kyle Desjardin – Is there any wrestling moves you would have loved to have been able to try that you never got to?
Trish: I actually can do an amazing moonsault but no one got to see it. There was definitely that thing of a heel stealing a babyface’s finisher, but back in the day, me and Fit were really keen on making sure that ‘that move is her move’ and ‘that move is her move.’ Everyone’s got their repertoire and moveset. When I left, everyone was pulling out each other’s moves. There’s this urge to go out and do cool stuff every night, but you have to resist it and define yourself as a wrestler, and that means defining your moveset.

Arthur – Just had an idea that I simply had to ask: I’ve always wanted to see you and The Rock star in a movie together think it would be so awesome is there any chance that that might happen?
Trish: As far as I know it hasn’t been presented to him, and it hasn’t been presented to me. We had the chance to team up in a main event match against Kurt Angle and Vince McMahon and I think as a team we did great work. We had great on-screen chemistry and I think that would translate really well. We could do some action/comedy, and I think that would be a lot of fun. He’s a good friend of mine and he’d be a pleasure to work with again.