A couple of ribs to fill the belly

Ah, it’s April Fool’s Day, so time to share a few stories of ribs we have collected over the past year. Today, Kofi Kingston and Al Snow tell two tall tales. Enjoy!

We were here in Canada. Me, Hornswoggle and the Miz were traveling together. You have to know this — Hornswoggle is always trying to drive. I think at home he has some pedal extenders or something so he can reach the pedals. But not on the road. On the road, he pulls the seat up all the way so the steering wheel is (right against his chest) and he (stretches out on the seat, nearly standing to reach) the pedals. And so his driving is really herky-jerky, and really dangerous.

One time I told him, ‘You are never going to drive us again.’ Because I’m not going to put my life in his hands.

But Miz thought it would be really funny, saying, ‘Yeah, let him drive,’ and I’m like ‘No, don’t let him drive.’

So one night, Miz and I go into this gas station. I came out first and Hornswoggle is in the front seat all (stretched out and) ready to drive. I’m like, ‘What are you doing?’ and he says, ‘Get in, get in, get in.’

All of sudden I realize that they had been trying to pull a rib me.

Miz was supposed to come out first and they were going to leave me. But I came out first, so we figured we could rib him instead. I get in and ‘Swoggle starts to drive off. I figured it would be funny, that Miz would run for a bit and try to catch us, then we’d let him in.

But then ‘Swoggle keeps driving — all the way to the hotel. Now, it’s not that far — you can see the hotel from the gas station, but it’s far enough, especially because it’s cold out. So now we see Miz come out and he sees we’re at the hotel and we’re not coming back for him. So we watch him having to cross this intersection, and then cross over this huge icy field. We’re dying laughing watching Miz make this trek to the hotel. We still laugh about it. 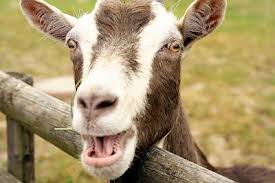 Is this the “somebody”?

Somebody had done some things to me. So I found a petting zoo nearby, and after the show that night, “somebody” went into the petting zoo and stole a baby goat, and put it in the back of that person’s rental car. It was good it was a rental car, because the baby goat chewed up the interior of the car. And that same “somebody” had stolen the key to that person’s room and went in while the other person was out, and released the baby goat in the room. Apparently, the baby goat destroyed the room. I’m not sure who that “somebody” was. But I know that he’s a great guy, I love that guy. I was amazed at “his” creativity on that one.