Reggie Parks has been designing belts for 45 years, cleaning carpets for 30, and in wrestling for, well, ever. Hence the Art Abrams Lifetime Achievement Award at the Cauliflower Alley Club reunion next week. 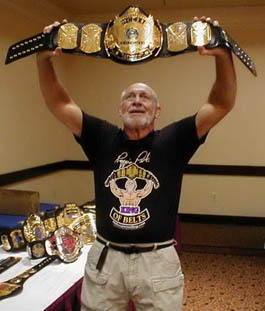 It’s been quite the run for the quiet farmboy from Edmonton, Alberta, who used to sell programs at Stu Hart’s Stampede Wrestling shows. The “boys” in the back convinced Stu to give him a shot, so in 1956, Parks was shipped off to Pacific Northwest to start an in-ring career that would run until 1982.

“I started at a boxing and wrestling club in Edmonton, then Stu Hart took me under his wing. He more or less was the guy that got me going, got me out on the road. He was involved in the promotion in Seattle, Washington area. That’s where I started out. I went from there to Portland, L.A., Texas. I was good enough to create a reputation for myself and then I went from there,” Parks said. 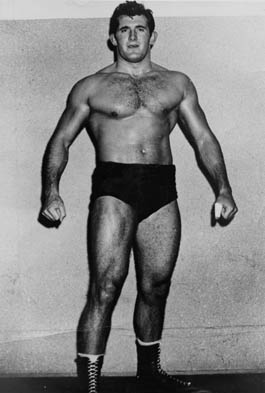 Promoted with magazine headlines like “Body Beautiful … That’s Reg Parks” and “Reggie Parks Kicks Up A Storm”, he made a name for himself as a babyface with a sculpted body and a polite demeanor — which he attributes to his Canadian upbringing. A lot of the promotional bumpf billed him from Australia, a more exotic locale than Edmonton, perhaps.

“Parks is not just a strongman, he is also a very agile and skillful wrestler,” wrote magazine editor Norm Kietzer in one piece. “He often sets up his opponent with a series of drop kicks and uses the airplane spin or the figure-four leg lock as finishing holds.”

He hit a lot of heights over the years, claiming the world tag team title with Enrique Torres in San Francisco in 1961, and at least six runs with the AWA Midwest tag titles, with Doug Gilbert and then Stan Pulaski. It was while with Gilbert that Parks got inspired to try beltmaking. 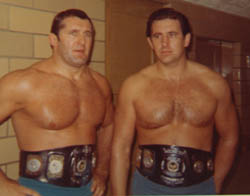 Omaha, Nebraska, promoter Joe Dusek had a great big tag team trophy instead of a belt. “The trophy was about six feet tall, and anybody who touched it, it would fall apart,” Parks recalled. Gilbert suggested they make up some title belts, and Parks felt he was handy enough to get the job done. “From there, word got out,” Parks said. “I made for the WWF for 10 years, WCW, independent groups. Just about everybody you could think of.” Recently, one of his belts even made it onto the cover of a Madonna CD.

When Parks was 48, he decided to call it quits. “I wasn’t a young guy anymore, and I wanted to get out of the business,” he recalled. Gordon Solie introduced him to guys in the carpet cleaning business, so he’s been doing that in Arizona for 30 years. “Belts was just a sideline, except now, when I don’t have time to do anything else nowadays.”

In the early days of his beltmaking sideline, Parks was content to let word of mouth do its job. He didn’t go out hunting for work, and wasn’t easy to find — even for his future partner in beltmaking, Ed Chuman.

“Obviously, in the early days, just like the wrestling business, it was a very closed business. You had to know he existed, you had to know what he did, and how to get ahold of him,” recalled Chuman, who was promoting shows around the Midwest and needed a belt, but couldn’t find him.

“My partners and I started this company, and we wanted a belt, and unfortunately couldn’t find him. Last I’d heard, he was in Florida. Reggie was a bit of a cowboy. He drives a Harley. For all I knew, he was dead. I couldn’t find him. Then I found out he was alive, but nobody would give me his phone number. I was pissed off,” Chuman explained. He finally got Parks on the phone, and cemented a relationship over a few weeks, explaining to Parks how others were copying Parks’ belts and selling them online — a new medium at the time. Parks was offered a partnership whereby Chuman ran the website, and took a piece of everything that came in.

The website — www.midwestwrestling.com — gave “belt marks” a place to go, said Chuman. They had always existed, “but they just had no idea where to go or how to get there,” said Chuman. “All we did was open a door and let them in.”

It has also meant that a lot of other competing beltmakers have gotten into business as well, but there’s only one Reggie Parks, and Chuman and Parks only trust two other men to work on projects with them — Dave Millican and Rico Mann. 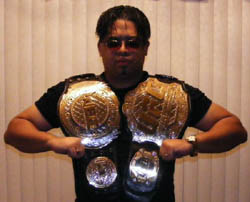 Each work on their own deals as well, but admit they wouldn’t be where they are today — designing belts as a primary source of income — without Parks.

“Honestly, it’s hard to believe that I’m doing this, and that I’m doing it with Reggie,” said Mann, whose work can be seen on his MySpace site. “It’s a business in every sense of the word. It can’t be considered a hobby by any means.”

Millican once tracked down Parks to order a belt, and confessed he designed his own too. Parks saw potential in examples of Millican’s work.

“Over the years, he’s mentored me,” said Millican. “‘Oh, I was wondering when you were going to pick that up.’ That kind of thing. It’s just been a natural progression. He opened a lot of doors and gave me instant credibility just by attaching his name to mine.” 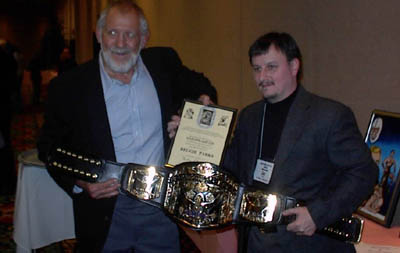 Reggie Parks and Dave Millican at the Cauliflower Alley Club reunion in 2001, where Parks was presented with a special belt (below). Photos courtesy www.midwestwrestling.com 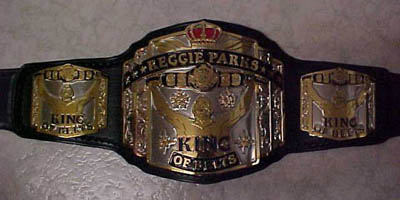 There was a little hesitancy at the beginning, said Millican. “He said, ‘I’m going to help you get started with these belts plates, the way that I do ’em. I like your other work, but…’ — and this is a quote … ‘You wouldn’t put the Mona Lisa in a shitty frame, would you, son?’ I said, ‘No sir, I wouldn’t do that.’ He said, ‘Exactly. For the first few belts that you do, I’d like to see pictures of your work.’ … I think felt like he had to do this for the integrity of what he’d done all these. … fortunately for me, he liked what he saw.”

With his business sense, Chuman has developed other avenues to sell the belts — company awards, pizza-eating contests, McDonalds, golf tournaments, and many organizations from the Chicago Bears and Tennessee Titans of the NFL, to baseball’s St. Louis Cardinals, to the Hell’s Angels. “We’ve done a lot of weird things … as long as they pay,” said Chuman.

It has come a long way from the days of Chief Jay Strongbow calling Parks on behalf of the World Wide Wrestling Federation, saying, “I need a belt with an eagle on it.” 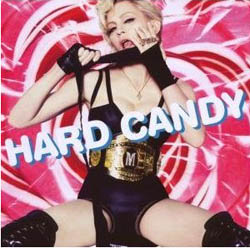 But it all comes back to the Material GirlBelts are made as full replicas, but also as cheaper toys, or into rings and belt buckles. – “Now you just go on the Internet, and it’s like Burger King — you get it your way,” joked Millican, who runs his own website at www.davemillicanbelts.com.

On the cover of her recent album, Hard Candy, Madonna is wearing a gold-plated buckle with a large diamond-studded “M” in the middle, with “give it to me” written over the top of the “M.”, under the nickname “M-Dolla.” Diamond-studded dollar signs sit on each side of the belt.

“As many belts as we do, and as many companies as we work for, that Madonna belt just went crazy,” said Mann. You can’t even do a web search for any of us without some reference to Madonna comes up now.”

It’s probably true that more people know “The King of Belts” through his beltmaking now.

“I think a lot of people are surprised when they find out Reggie was a wrestler,” admitted Mann, who has been entertained at wrestling conventions by stories of Parks from his peers. “All the boys put him over.”

As for Parks, he relishes all those memories. “There’s so many stories and things, places. It was a constant adventure every night to travel. … It was great fun.”