The NHL season is upon us — finally — and one of the league’s biggest wrestling fans is Jason LaBarbera, the backup goalie for the Phoenix Coyotes. 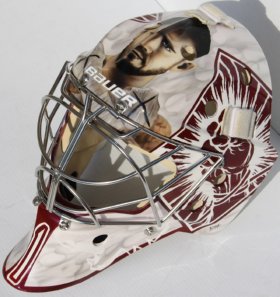 How much of a fan is he?

He has had his mask painted at different times with images of CM Punk and The Undertaker.

The Punk mask is the most recent one, and he wore it during the latter half of the 2011-12 NHL season.

Just before Christmas, LaBarbera shared his love of all things Punk.

“It’s obviously a lot different now, but the characters and the way it was presented, the good guy and the bad guy, the hero, all these different things that, as a kid, you’re blown away by the whole thing,” LaBarbera told SLAM! Wrestling. “As I got older, with the NWO and the Attitude Era, I was in high school when that was going on. That was obviously an unreal era when both WCW and WWE were going nuts at the time.”

Then, like a lot of fans, when WCW died off and was bought out by WWE, he drifted away.

“I probably went four or five years where I’d watch it every once in a while,” he confessed. “Then when Punk had his thing in Vegas there two summers ago, it totally hooked me and brought me back in. ‘What is this? What’s going on?’ Ever since then, I haven’t missed a Raw and I haven’t missed a pay-per-view. He definitely got me back in it and I really enjoy watching him. I find him extremely entertaining and funny and great in the ring.”

The Punk-inspired mask, by Toronto artist David Arrigo, has a head and shoulders image of the WWE champion and, on the sides, the angry, defiant fist from Metallica’s St. Anger album.

Punk re-tweeted a photo of the mask, and LaBarbera is eager to meet him one day — perhaps even at the Royal Rumble at the end of the month; with the NHL schedule just confirmed, the Coyotes are in town before and after the big show.

“He’s such a better heel,” LaBarbera said of Punk. He also wishes WWE would get better use of Paul Heyman. “They don’t use him enough. He just kind of stands there … let him run wild.”

The fascination with Punk has led LaBarbera to seek out the grappler’s earlier work, in particular his Ring of Honor days, against the likes of Samoa Joe and Colt Cabana.

“It’s pretty cool watching some of those old matches,” said LaBarbera, who just turned 33. “I’m pretty excited for him now with The Shield angle they have going now. I’ve watched [Dean] Ambrose and [Seth] Rollins and stuff and I think those guys are unreal.”

As he matured, so has his taste in what he likes from wrestling. “As I’ve gotten older, especially now, I appreciate more watching guys that are good in the ring, and watching a good match, and how it’s put together, and the different subtleties that they do. The storylines aren’t as edgy as they used to be but they’re still pretty good.” 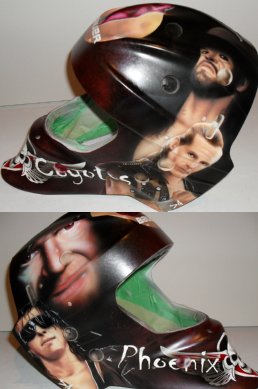 When TNA had its Bound For Glory event in Phoenix in October, LaBarbera was there.

“A couple of us went, and we got to go backstage,” he said. “Hulk Hogan for me as a kid growing up was The Man. We got to meet him backstage and he talked to us for 20 minutes. That was pretty cool.” Hogan talked a lot about the Tampa Bay Lightning and how his daughter, Brooke often sang the national anthem.

“I was like a little kid, almost speechless,” admitted LaBarbera.

His earlier WWE-inspired mask had a Phoenix tie-in as well — he was paying tribute to WrestleMania XXVI at the University of Phoenix Stadium, and it featured The Undertaker vs. Shawn Michaels and Bret Hart (and his heart and skull logo) vs. Vince McMahon. A howling coyote on the forehead finished it off. LaBarbera went to WrestleMania that year and WWE.com wrote about his mask and love of wrestling [Coyotes goaltender puts WWE on ice … and on his mask.] 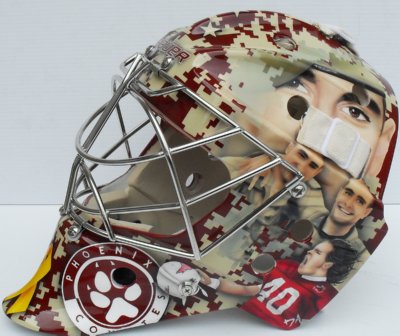 Other masks have paid tribute to Metallica — by far his favourite band, who, he has met — and Pat Tillman, the safety for the Arizona Cardinals who gave up his football career to serve in the Army Rangers in Afghanistan, and was killed by friendly fire in April 2004.

“Barbs was one of my first goalies I ever painted for, it’s been some five years now and I always look forward to working with him,” said Arrigo. “Between his love of rock ‘n’ roll and wrestling, there’s always something interesting to work with.”

During the NHL lockout, which ended on January 6 after 113 days, LaBarbera stayed in Phoenix, and skated with whatever Coyotes were in town, as well as other NHLers who had homes nearby.

“We’ve had a lot of guys from other teams come down over the last couple of months,” LaBarbera explained, adding that there were times that they iced more than 30 players for practices.

With the physically-grinding life on the road, there are certainly similarities between wrestlers and hockey players. LaBarbera played with three teams in the Western Hockey League (primarily the Portland Winter Hawks, but also Tri-City and Spokane) before being drafted 66th overall by the New York Rangers in the 1998 NHL Entry Draft. Big-league stops have included the Rangers, the Kings, the Canucks and the Coyotes, but there were trips to the minors, including Charlotte in the ECHL and Hartford and Manchester in the AHL.

“Off-ice / off-the-mat, their lifestyles are completely different. Guys now in hockey and in wrestling take a lot better care of themselves than guys back in the day. Those guys were animals. Some of the stories you hear, ‘Holy crap, these guys are out of their mind(s)!’ And in hockey too, ‘Holy crap, how the heck did these guys play every day?'” he laughed. “Guys now, you’re in bed by 10.”