The Royal Rumble: a mainstay match in the WWE for 25 years. Truly the one match every year where the outcome is always in doubt until the last man is left standing in the ring (and even sometimes not even then).

Those who remember the various “skinning the cat” moves know exactly what I’m talking about. Other than the winners of the various Rumbles, fans remember the crazy moves which saves a superstar from elimination. 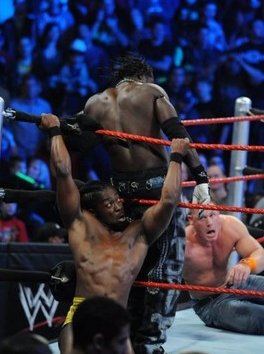 Kofi Kingston stays alive outside the ring while battling R-Truth during the Royal Rumble match at the Royal Rumble PPV on January 31, 2010, at the Phillips Arena in Atlanta. Photo by Mike Mastrandrea

In the 1995 Rumble, Shawn Michaels set the bar when he defeated the British Bulldog. It wasn’t until the 2011 Rumble that John Morrison outdid HBK when he was able to hang onto the barricade and jump back on the ring steps. Just one year after Morrison’s move, it appears as though Kofi Kingston is the new standard-bearer for Rumble self-preservation.

With both his hands on the floor, it appeared as though Kofi’s night in the Rumble was done. The Miz, doing the wise thing, simply attempted to push Kofi’s legs off the ring apron. Rather than complying with Miz, Kofi proceeded to hold himself up via a handstand and walk back to the ring steps, saving himself and winning the 2012 “Tell Me I Didn’t Just See That” (Most Shocking Moment of the Year) Slammy Award.

With the bar now set ridiculously high, how does Kofi, or any other superstar for that matter, top that?

For Kingston, he has a simple answer: win the Rumble.

“That would be the ultimate trick,” Kingston said. Despite how amazing that move was, Kofi admitted it definitely wasn’t something he thought of doing until he was in the match. “I never think about what I’m going to do in a particular match until it comes up.”

In addition to not knowing the winner, the other big surprise in most Rumbles are the guest/surprise entrants. But it’s not just the fans who are surprised when the guest participants are revealed. “The people who are in the match are waiting to see who the surprises are just as much as everybody else who’s watching it,” Kingston said. “It makes it that much more exciting.”

If Kofi had his way, the one superstar from the past he’d like to have show up would certainly be deserving. Being passed up to make an appearance on Raw’s 20th anniversary show might be the reason. Koko B. Ware, who participated in the first ever Monday Night Raw match would be Kofi’s pick.

“Seeing him and Frankie come out on his shoulder was always exciting to me,” Kingston said. “He’s one of the inspirations why I got into the WWE because of the high energy he had. He and I share that. He always came out with high energy and that’s something I try to do.”

Should Kofi win the Rumble, who would he prefer to face for the strap at WrestleMania? Assuming he retains the title at the Rumble, Kofi would like to go up against his former tag team champion partner CM Punk. “We’re pretty close friends,” Kofi said. “Any time you’re in the ring with a close friend, it makes it that much cooler.” 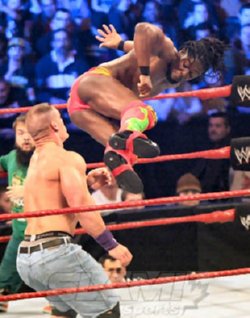 But regardless of which title he would go after, Kofi won’t be satisfied with just winning one of the World titles. “One of my goals as a kid was to win every single championship,” Kingston said. “Right now, I haven’t won either the World Championship or the WWE Championship so I’ll cross that bridge when I get to it.”

Why does he want to go the JBL route of claiming every major title? Ultimo Dragon.

“Ultimo Dragon would come out with titles on his shoulders, I think he had seven. I always thought that looked cool,” Kingston said. But of course, he’s realistic that having seven or more titles at once will probably never happen. “In this day and age I think it’s unlikely to hold them all at the same time, the next best thing is to win every championship at one point. That’s my goal. We’ll see. I’m just taking it one day at a time.”

If Kofi Kingston does end up winning the Rumble, it won’t matter who his opponent is, the WWE Universe will certainly be treated to a high-flying energetic match that only a handful of other superstars could hope to duplicate.

Matthew Asher is a freelance journalist currently living in Atlanta, Georgia. He attended the Royal Rumble when was held at Philips Arena and remembers going ballistic when Edge was the surprise participant and ended up punching his ticket to WrestleMania.