On January 11th, Trent Beretta was outside his apartment building waiting for his ride to NXT when his phone rang. With one phone call his WWE career was effectively over, and he was wished the best in his future endeavours.

“Luckily I wasn’t driving to the show with everyone at the time, it was just me when I got the call” Beretta told SLAM! Wrestling backstage in Calgary in his first print interview since his release. “I totally saw it coming. I was on the road doing pretty good, I thought I was improving constantly and then I tore my tricep. I was out six months and was ready to get back to it and was sent to FCW practice. So I was like, ‘Ohh, something’s up. This isn’t good.'” 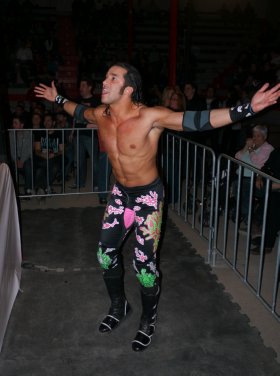 Trent Baretta at the Hart Legacy Wrestling show in Calgary, on January 18, just seven days after his WWE release. Photo by Jason Clevett

Beretta (Greg Marasciulo) has the distinction of leaving the company with a televised victory, defeating Leo Krueger by DQ after interference by Kassius Ohno in a match broadcast after his release.

“I was halfway through an NXT angle with the company. My last match was actually a tag the Wednesday before I was released against Dolph [Ziggler] and Brad Maddox and I lost that one. But my last TV match I won by DQ.”

The 25-year-old Beretta explained how he went from main eventing a NXT house show, teaming with Ziggler’s brother Briley Pierce against one of the WWE’s top talents to released two days later.

“As far as headlining the house show that doesn’t mean anything. I am buddies with Dolph and his little brother and they wanted me to be part of it. It wasn’t like the office was like, ‘We need Trent.’ It was Dolph saying, ‘Let’s have him involved.’ It isn’t about how good of a wrestler you are. It is more about what your character is and they weren’t buying what I was selling them as a character; that is why I am gone. It isn’t that they thought I was a bad wrestler; they just weren’t happy with my character.”

Beretta wasted no time getting back to business, debuting at the initial Hart Legacy Wrestling show.

“Dynamite Dan hit me up on Facebook and said, ‘Would you want to work in Calgary next week?’ I am not going to take any time off, I am a wrestler, that is what I do. I am really excited about wrestling in this building. I have seen the tapes from this building, it is really cool I am going to be taking pictures of it. I already took a picture of an old heater in the locker room. I’m like, ‘Oh man, Dynamite Kid probably got heated by this thing once.’ I am definitely excited about being here.”

In the evening’s opening match, he teamed with Brian Cage in a four-team elimination match that also featured El Generico. It was Generico’s final independent wrestling appearance prior to signing with the WWE, and the dynamic of the recently fired versus the new hire played into the bout. Beretta is a fan of the Canadian wrestler and wishes him well.

“First I would be like, ‘What the hell man? You have to get signed right when I get fired?’ I really wanted to wrestle him either there or on the indies. Generico is so good he is legit one of my favourite guys to watch because everything he does is really good. I don’t think he needs my advice he is going to be fine.”

After five years with the company the former dudebuster is eager to show what he can do. While he had some standout moments on Superstars and NXT this is his first chance to wrestle without restraint.

“There were times on Superstars and NXT I got to wrestle longer. Even in the Saddledome I got to have an awesome match with Tyson Kidd — it is probably my favourite match. They gave us 17 minutes [so] a great match is going to happen. It was in Canada so the people were behind him. Tyson is one guy who every time I got in the ring with him it was so easy and so much fun. Me, Tyson and Curt Hawkins used to call ourselves the rubber men because we could take a lot of bumps and took pride that none of us got hurt. In 2012 I tore my tricep, Hawkins tore his knee and just at the end of the year Tyson blew out his knee. So rest in peace rubbermen. It’s a sad story.”

The Hart Legacy show featured Davey Boy Smith Jr., Lance Hoyt and Chris Masters, all former colleagues in WWE who have continued to make a living as wrestlers after being released. Beretta is far from done.

“I always pictured myself being an indy guy and eventually down the road I would get to WWE. What ended up happening is I was signed when I was 20 so I never really got the chance to be an indy wrestler,” he concluded. “I started wrestling when I was 15 but you don’t get booked a lot when you are 16 or 17. I didn’t have a lot of connections so I didn’t do too many indies. For me I am a wrestler no matter what, if I am in WWE or somewhere else it is cool. I didn’t see getting fired as my life being over, this is an opportunity to keep wrestling and doing my thing. I am not really down about it at all. It is a new chapter and I think it is going to be great. Now is my chance to get out and show people what I can do and there is nothing holding me back. There are no old men in suits to yell at me and tell me what I did wrong after my match. I am looking forward to just having fun.”

Jason Clevett is excited to add Trent’s first interview to his list of milestones with SLAM! Wrestling. Jason has a few more stories coming soon after too long of a dry spell.