Trent Beretta having a blast on the indy circuit

It has been just over a year since Trent Beretta was released from the WWE. For some wrestlers that would have been the end of a dream. For the 26-year-old Beretta, it is only the beginning of the adventure that he has wanted since childhood.

“This has been a great time and the most fun I have had in my career,” said Beretta. Though the road has been a little bumpy at times, Beretta has embraced the last 13 months as a great learning experience. 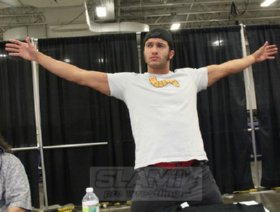 Trent Baretta is enjoying life on the indy scene. Photo by Christine Coons

When he was released from the WWE, the Mount Sinai, New York native felt that he didn’t have much of a name value on the independent wrestling scene. This situation motivated him to work harder than ever before. “I wasn’t really a WWE name guy,” said Beretta. “I was on TV for a bit, but I wasn’t well known.”

“I have had to earn the fan reaction and in a year it has gotten better,” stated Beretta, whose real name is Greg Marasciulo. “My name is growing and I am doing it. It’s not a company doing it.”

His recent travels have seen him take on challengers for Pro Wrestling Guerilla, Dragon Gate USA, New Japan and every place in between. “I have gotten better this year,” smiled Beretta. The accelerated learning he has encountered could be a result of wrestling against a who’s who of independent wrestling such as El Generico (he has since moved back to Mexico, as the story goes), Paul London, Roderick Strong, AR Fox and the Young Bucks. “I have been in longer matches (this year) and in a more prominent role on the card.”

Dragon Gate USA and Evolve booker Gabe Sapolsky has been impressed with Beretta’s abilities. “Trent Beretta is the total package. He is a superstar. We are lucky to have him in DGUSA and EVOLVE right now. He makes my life as a booker easy,” said Sapolsky. “It’s like you just give him 20 minutes against anyone and he gives you a match of the year candidate. If you need proof just look at his matches against Rich Swann, Ricochet and Anthony Nese in DGUSA and EVOLVE.”

ESW promoter Brett Stymus has been very impressed with the reaction Beretta received from the fans. “Trent is a very talented performer,” said Stymus. “I don’t think I can say enough good things about him. He works hard in the ring and always delivers a great match for the fans watching. I have already given him many future dates for ESW.” Beretta will be returning to ESW on Saturday, March 1, 2014 when he takes on rival Brandon Thurston.

Alpha-1 Wrestling promoter, Julian Micevski (also known as Ethan Page), enjoyed having the former WWE talent at his show in Hamilton, Ontario. “It was great to have him on our show. He was over with the crowd and busted his ass. He did a really good job.” 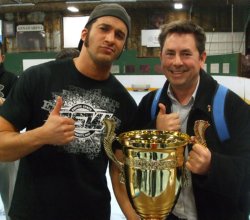 With his rise in popularity Beretta still looks back to his time in WWE’s developmental system, Florida Championship Wrestling at the time, as a great place for a young wrestler to learn. “Dr. Tom (Prichard) pulled me aside in developmental and really worked with me to get out of my shell,” explained Beretta. “He turned me heel, brought out my personality and saw something inside of me.”

He has taken the WWE lessons and incorporated them into his own unique style. “I like to think that everything I do means something,” said Beretta. “I’ve learned the WWE style and applied it to the indy style.”

With a year of hindsight Trent Beretta has fond memories of his return to local and international wrestling. “I just got back from India,” reflected Beretta. “What an unreal experience!” In India he toured with Sonjay Dutt and Colt Cabana. The wrestlers’ faces were plastered on billboards across India. 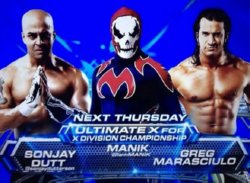 When he appeared in TNA, it was under his real name of Greg Marasciulo.

“Being a part of the New Japan best of the super juniors was also a great time,” explained Beretta. He also had the opportunity to participate in TNA’s Ultimate X match.

Whether he is in Japan, India, Los Angeles, Calgary or Hamilton, Trent Beretta has the right mind set for wrestling. “I don’t care if there are only 20 people in the crowd. I will always go full out!”