Nothing like waking up to find yourself as the SUNShine Girl in the Toronto Sun newspaper. But that was the story Tuesday for Jasmin Areebi, a Toronto woman wrestler on her way up.

Already today, she has booked a couple more photo shoots, including one in the United States, and the wrestling gigs have been pretty steady for over a year now.

Areebi, a nursing student by day at George Brown College of Arabic background, first got interested in pro wrestling as a teen. She saw an advertisement for a training class with TNA Knockout Taylor Wilde, who is also from Toronto. 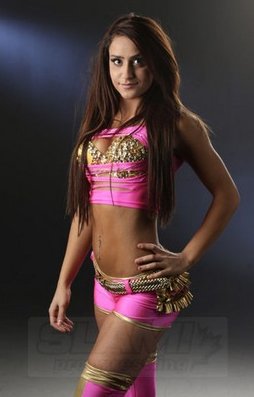 SUNshine Girl Jasmin loves the professional wrestling at Indy shows but, strangely enough, she says her favourite car is “a spaceship.” If one isn’t available, she will settle for an ice-cream truck. That’s more like it, Jasmin. (CRAIG ROBERTSON/QMI AGENCY)

A nervous 16-year-old, Areebi attended the seminar at the Squared Circle Training Centre, and has been hooked ever since.

“I fell in love with wrestling,” she said. Just 19 years old now, the 5-foot-3 Areebi has been training for a year and a half and continues to go to the training sessions with trainer Rob Fuego on a regular basis.

The photo shoot for the Sun was a lot of fun, with veteran photographer Craig Robertson making her laugh often. At the time of the shoot, she was the women’s champion for an Oshawa promotion, hence the title belt in some of the photos.

Recognizing the only way to get better is to hit the road, Areebi is out every weekend.

“I travel a lot,” she said, praising the many other Ontario woman wrestlers that she has worked with.

Armed with a larger portfolio, Areebi is one step closer today than yesterday.