Every year, the men and women of the wrestling business of Texas congregate in an invitation-only event known as Red’s Texas Shoot Out. A little over a week ago, Larry Dwyer, wrestler and referee in World Class, attended the event in Richardson, Texas, and shared his story with SLAM! Wrestling readers. 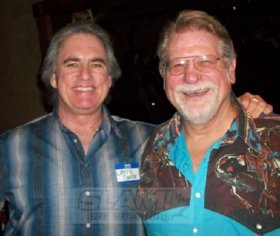 What started out in the early 1990s with a few retired wrestlers getting together for lunch has now morphed into a yearly gathering of workers past and present surpassing 140 attendees.

The event continues in Red Bastien’s legacy as a place for the boys to renew old friendships, as well as for the new generation to meet their childhood heroes tell stories of a world gone by.

Many of the original crew that I was privileged to join were Bronco Lubich, Killer Karl Kox, Skandor Akbar, Mike Padousis, Lord Alfred Hayes, and Ray Stern, and of course Red. All are gone now.

Little by little Red and I would bump into some of the boys around town, inviting them, leading us to find bigger and bigger venues. Over the years the Shootout expanded to wrestlers from not only all of Texas, but Louisiana, and Oklahoma too! Nobody ever turned down an opportunity to spend time with Red!

As Red’s health began to falter, I lost the heart to continue the function, even though the inquiries for the next Shootout never ended.

Up to the plate stepped “Cowboy” Johnny Mantell and his wife “K”, and the torch was passed. Under their expertise the Shootout continues to grow and attract more wrestlers every year.

This year, we met in a restaurant in Richardson on Saturday, February 8th, and it was a blast.

Cheers to you Red, your legacy continues on!!

Larry Dwyer worked as a wrestler and occasional referee in Texas in the mid-’80s.