Nelson Frazier Jr., who had multiple runs in WWE as Mabel, Viscera, and Big Daddy V, passed away of a suspected heart attack on February 18, 2014, having just turned 42 on February 14th.

At 6-foot-9 and at times weighing over 500 pounds, Frazier was a larger-than-life character who portrayed many personalities during his career.

He was born in North Carolina, and raised a ‘rasslin fan. “I grew up on Ric Flair, Ricky Steamboat, Nikita Koloff and all that,” he told Phil Strum of the Poughkeepsie Journal in 2008. “I was hooked on wrestling way early in life. I was right there with the NWA and I also enjoyed AWA and WWF. I loved it all.” 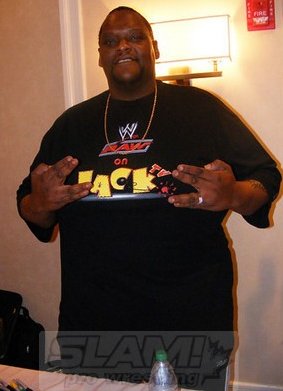 Nelson Frazier Jr. at a fan fest in June 2012. Photo by Michael Coons

Always bigger and taller than his peers, he started amateur wrestling in ninth grade. After high school, he studied commercial art.

But wrestling meant a different path, and Frazier hit the national spotlight in WWE in 1993, joining Mo (Bobby Horne) and rapping manager Oscar (Clemmie Garard) to form Men on a Mission.

“My heart is broken,” wrote Horne on Facebook. “My brother and partner is gone RIP KING MABEL”

In a 2011 interview with Alex Marvez of Scripps Howard News Service, Garard explained how the trio were formed. Garard was a part of Andrew Dice Clay’s Las Vegas comedy act. WWF employees Vince McMahon and Randy Savage took in the show at Caesar’s Palace.

“Vince and Macho Man were shooting vignettes and coming through the casino,” Garard said. “I saw them and did a freestyle rap. Vince was so impressed that he said to call him. That got the ball rolling.”

Horne and Frazier had both gone for wrestling training under Gene Anderson in North Carolina. Horne got there first. “Nelson and I went through wrestling school together,” Horne told interviewer George Wren in July 2010. “In fact, I actually taught him as he was just coming to the school as Gene Anderson was starting a job with the Mecklenburg County Sheriff’s Department, where he later died, during a training class.”

Veteran wrestler George South took over their training and on his shows, they teamed as the Harlem Nights. After two years on the indy scene, they headed to Memphis where the USWA had a developmental deal with the WWF — though they did not. Three months later, they were called up.

In the WWF, the pair unsuccessfully challenged The Quebecers for the tag team titles at Wrestlemania X, and won the titles in England in May 1994 before losing them back two days later.

In 1995, Mabel and Mo would turn on Oscar and The Smoking Gunns, leading to Frazier’s biggest run in the company. He won the 1995 King of the Ring tournament and went on to challenge WWF champion Diesel at that years Summerslam.

Frazier claimed that he was originally slated to win the WWF belt. “Actually Vince (McMahon) was leaning towards me (to win the WWE title) but if anyone knows about the Clique they can change things around and that’s what happened,” he told Arda Ocal of The Score. “The finish was changed. Yeah, Vince was really leaning towards me but you can’t stop the powers that be.”

After feuding with the Undertaker, when he legitimately broke Taker’s orbital bone with a legdrop, Frazier lost a casket match at the December In Your House Pay Per View and left the company in early 1996.

Nelson would wrestle in the USWA as well as Puerto Rico’s World Wrestling Council, holding the promotion’s heavyweight title. After a one night appearance in ECW in November 1998 he returned to WWE and was renamed Viscera, as part of the Ministry of Darkness stable. He would frequently team with Mideon before being released in 2000.

Frazier returned to WWE for a final four-year run in 2004. Out of teaming with Trish Status in her feud with Lita and Kane, the start of his “Worlds Largest Love Machine” gimmick evolved. He tried to seduce ring announcer Lillian Garcia and later teamed with Val Venis and Charlie Haas. He was drafted to ECW in June 2007, managed by Matt Striker in a feud with The Boogeyman. He lost to ECW champion CM Punk at No Mercy 2007 and participated in the February 2008 Elimination Chamber match. His final WWE match was in March 2008 against Punk.

He was always proud of his various incarnations. “I know how to develop characters,” he told Phil Strum of the Poughkeepsie Journal in 2008. “I developed and got five characters over in WWE and WWF. I could get another character over too. My favorite one of all is the Love Machine. I had fun with that one.”

After leaving WWE Frazier continued to wrestle on independents as well as for All Japan Wrestling. He also branched out into acting, including 2011’s National Lampoon’s 301: The Legend of Awesomest Maximus.