A lot has happened since Kyle O’Reilly last talked to SLAM! Wrestling. That was in September 2010, and he had just signed a Ring of Honor contract, and he subsequently moved to St. Louis and enter ROH’s 12th anniversary show Friday in Philadelphia as tag team champion with Bobby Fish as half of reDRagon.

Time to catch up with the British Columbia native. 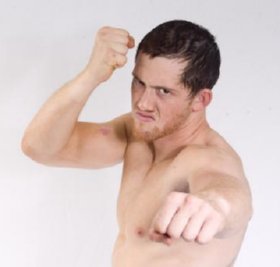 “Davey helped me transferring from Canada to the U.S.,” O’Reilly told SLAM! Wrestling. “He helped me get my start on the indies and in particular in ROH and he helped me become who I am now, from what I was before.”

O’Reilly, much like Richards, is an avid MMA trainee, especially Brazilian Jiu-Jitsu.

“I was already training in kickboxing and BJJ before I met Davey. It was always a solid part of my training. But since then, I really picked up and it started showing in my matches,” said O’Reilly, who will turn 27 on March 1st.

Would he have pursued an MMA career if MMA was what it is today when he started training as a pro wrestler? Probably not, he said, though it’s a question he’s asked a lot. As far as becoming an MMA fighter down the line, O’Reilly is not too thrilled about the idea.

“I’m not sure I would go for it. I much prefer doing submissions and that’s why I’m doing grappling tournament every time I get the chance. My craft is really pro wrestling, but as they say, never say never,” expressed O’Reilly, who recently competed in a grappling tournament in Chicago held by MMA referee Herb Dean.

As he admits, his craft is pro wrestling and his heart is in it as well, as O’Reilly was always a wrestling fan.

“I was a huge Bret Hart fan, for obvious reasons. I was also fan of Shawn Michaels, The Undertaker, Vader. When I started watching Japanese wrestling, I became a fan of Toshiaki Kawada, who really stood out to me and his style really opened my eyes at the time.”

Pro wrestling and martial arts in general weren’t the only interests he had in sports.

“If I would’ve not become a pro wrestler, I would have tried to pursue a football career,” he said. “I also used to play hockey and I’m still part of a rugby club.”

But pro wrestling actually worked for him and he is now a two-time ROH World tag team champion alongside Bobby Fish. Before that, he teamed a lot with current ROH World champion Adam Cole, as the two were dubbed “Future Shock.” Although they never won the tag titles in ROH, he travelled the country working either against or with Cole, building a strong reputation as a worker along the way. The two solid prospects were being groomed to be much more down the road.

“As a teammate or an opponent, it’s always an absolute pleasure to work with such a talented worker,” O’Reilly said of Cole, the current ROH World champion. “He elevated my own game by proxy. We had a great run as a tag team and Adam is really an amazing guy in and outside the ring.” 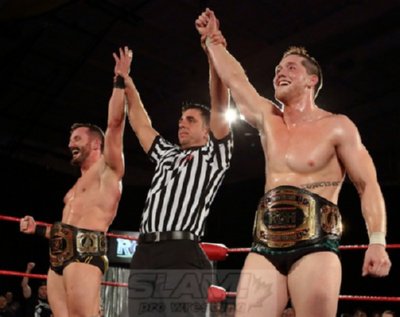 Bobby Fish and Kyle O’Reilly win the ROH tag team championships at the Ring of Honor 11th Anniversary show in March 2013 at the Frontier Fieldhouse in Chicago Ridge, IL. Photo by The Masked SLAM! Wrestling Photographer.

Now known as half of the reDRagon, O’Reilly and Fish are third in ROH history for combined reigns, only behind the Kings of Wrestling (Chris Hero and Claudio Castagnoli — now Antonio Cesaro) and of course, The Briscoes.

“Teaming with Bobby was something I was looking out to when I first got here. I was totally psyched about it and we were both looking forward to it. He helped me a lot with my character, with vignettes and promos. I’m having the most fun with him.”

About their team’s name and its special spelling, O’Reilly tends to keep the kayfabe on it.

“It’s a weird name that Bobby came with. We were just two guys being paired together so we needed something to capture people’s attention. Even if we get asked if the DR in caps letters is for Davey Richards or not, the name has no actual meaning. Actually, it’s for you to decide! It gets people confused and this is why it captures people’s attention.”

Many former ROH World tag team champions like El Generico (Sami Zayn), Claudio Castagnoli (Cesaro), Tyler Black (Seth Rollins), Eddie Edwards and his good friend Davey Richards are now either with WWE or TNA. Does he believe he could follow the same path?

“As any pro wrestler, you always need to have further aspirations. Working in Japan would actually be something I’d definitely like to do in a near future. But right now, my goal is to continue to be the best wrestler possible. I have a lot of faith in ROH, I’m proud to be in ROH and I am extremely happy here,” said O’Reilly, who is still under contract with the company.

In the meantime, this coming Friday for ROH’s 12th anniversary show, at the National Guard Armory in Philadelphia, where everything started for ROH, O’Reilly and Fish will defend their tag titles against Adrenaline Rush, ACH and TaDarius Thomas, the team that beat them two weeks ago in a non-title match in San Antonio to earn this title shot.

“It’s going to be a really good match. The last one was great and I’m really looking forward to this one, as we’ll try catching up on the Briscoes!”

Pat Laprade also talked hockey with Kyle and learned that being from BC, Kyle has a love/hate relationship with Vancouver Canucks’ goalie Roberto Luongo. Of course, being from Montreal, Pat is a Carey Price fan! While Kyle will watch the Olympics semi-final between Canada and U.S. from his hotel room in Philly, Pat will be driving to the show. To talk wrestling or hockey, reached Pat on his Facebook page or on Twitter.