Santino Marella thinking down the road

Hampered by a few nagging injuries, including neck surgery in January, Santino Marella has been thinking about his future a lot. His massive gym in Mississauga, Ontario, is a going concern and a passion, but so is performing.

If it looks like he’s having fun out there again on WWE broadcasts, it’s because he is.

“I was out a little bit with my neck injury and now I’m back,” Marella told SLAM! Wrestling on Thursday. “I’ll tell you, every time I’ve taken a little bit of a disappearance, the fans are so nice to me when I come back. I love to hear them cheering and I do my best to make entertainment for them.”

Like Daniel Bryan today, Marella once rode the crest of fan popularity right into the Elimination Chamber match. Two years ago, Marella was a last-minute replacement for an injured Randy Orton in the World Heavyweight Championship bout.

“It was an opportunity for me, because Randy was hurt, so I stepped in. It was one of the greatest matches of my life,” he recalled, explaining some of the challenges of the complicated bout, with six wrestlers in the ring, but four starting out in locked pods before being released one at a time. This Sunday’s main event has Randy Orton’s World Heavyweight Championship on the line against John Cena, Sheamus, Christian, Daniel Bryan, and Antonio Cesaro.

“It’s a very, very intimidating match,” Marella said. “The structure alone is very intimidating, solid steel. If you fall incorrectly, you really, really get hurt. Of course, you’re not just facing one opponent, or two opponents, you’re facing five other guys. This is a serious scrap. When the pod opens, that person is fresh, so you’re always getting a fresh person coming in. It is really, really interesting dynamics in this match — and dangerous.”

Who is his Elimination Chamber pick for Sunday? It’s hard to choose, he said, because so much depends on who gets in the match when. 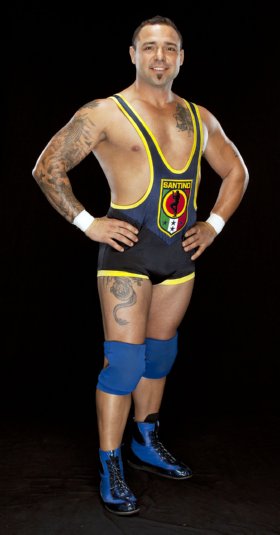 “For example, let’s say the strongest guy comes out first, and then someone not as strong comes later, but he’s fresh. It’s really difficult to anticipate who’s going to win, because there’s some luck involved, luck of the draw. Somebody might have a problem with somebody and give him some beats, and then later on he’s more susceptible to be beaten because of the feud. Then the other guy might be long gone. It will be very interesting, but I like Antonio Cesaro. He’s looked pretty good the last couple of weeks. He’s a very strong guy. Keep your eyes on him, I think.”

WWE fans have had their eyes on Marella since April 2007, when he was picked out of the crowd in Milan, Italy, to face Intercontinental champion Umaga. Santino upset the monster and won the title. He subsequently won another I-C belt, the U.S. title, and was a WWE tag team champion with Vladimir Kozlov.

He believes there is still the chance to be on top again, even if there’s a lot of miles on his 34-year-old body.

“It’s interesting, because I was under the belief of just saying, ‘You know what? It’s been a great career, I’m getting older, my body’s a little bit beat up, so just be grateful every day that you’re doing it because it’s the best business in the world, I think. It’s such a privilege, and I’m very grateful every day that I get to perform in front of people.’ That’s what I was. Then all of a sudden, things got a little more alive again, and I’m thinking, ‘You know what? They call me the Milan Miracle, so maybe it’s time we have another miracle, but this time a really big miracle, you know?’ So who knows, 2014 maybe something special goes on near Christmastime, or something like that, if I can calculate the stars properly.”

He referred back to an old lesson from a former WCW World champion. “I was talking to Ron Simmons a long time ago, and he told me, ‘Look, you can lose every day for 10 years. You win the right match at the right time, you’re a heavyweight champion.’ I’ve always remembered that. Of course, Santino can pull out a miracle any day. He is a miracle.” 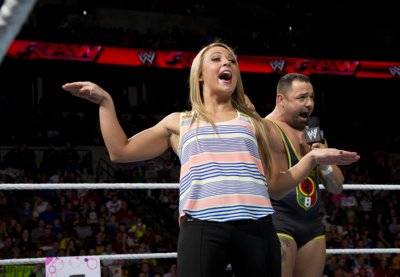 Currently, Marella is in a storyline with Diva Emma alongside him, two funny dancers teasing the professional dancers in Fandango and Summer Rae. A recent call-up from NXT, Emma was destined to be alongside him, said Marella.

“They had been hoping that Emma and I get together for a long time, because perhaps there are similarities — they call her the female Santino, which I feel bad for her,” he cracked. “She has a very unique personality … For the short time she’s been out there, the people adore her very much. It’s going to be fun to see where this goes.”

Emma is actually Tenille Dashwood, an Australian who studied pro wrestling with Lance Storm in Calgary, Alberta, Canada. WWE has apparently chosen not to go the stereotypical route with her as a female Outback Jack. “I kept saying to her, ‘Put another shrimp on the barbie!’ until she told me to stop saying that,” admitted Marella. 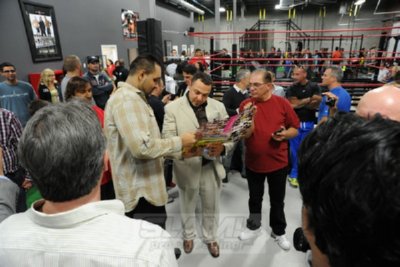 Santino Marella is surrounded by wellwishers at the launch of the Battle Arts Academy. Photo by Mike Mastrandrea

On the home front, Marella is really Anthony Carelli, from Mississauga, which is also where his Battle Arts Academy is located. The gym has only been open five months, and before that he had some time off from WWE to set everything up. Now he is learning to strike a balance.

“Before, when I was on the road, I would be exhausted and tired, and I would come home and I would rest,” he said. “Now, when I go on the road, that’s my rest, because from the moment I land, I go straight to the gym and make sure everything’s running smoothly, and the programs that we are running are evolving and developing, that we have new students. It’s still a new business — we’ve only been open since September — but we have some amazing things going on here. Some of the transformations of our clientele, gaining good weight, muscle, losing weight for people who want to lose weight. And there’s kids here that are young boxers, and jiu-jitsu fighters, pro wrestlers. It’s really doing well. You should come down and have a look, because you won’t believe this place. There’s nothing like this gym anywhere that I’ve ever seen.”

There’s an open-door policy for other WWE superstars at Battle Arts Academy — or even more if they are interested.

“Every time they are in town, this is the place to train now. They have a homebase here,” he said. “I was wondering if perhaps we could create a business opportunity model for other superstars in their respective cities to perhaps open a Battle Arts Academy, or something similar, and give back to the neighbourhood and have something for after wrestling.”

WWE has been very receptive to his outside interest.

“They have been very, very supportive. They give me plugs sometimes on the air, which is amazing,” he said. “I had one of my students come in here and say that he heard JBL say it on Monday Night Raw, and that’s how he heard. That little plug paid off immediately.”

His following on Twitter at @milanmiracle — nearly 900,000 — was a natural place to pitch his gym as well, but unlike the Twitter feed of many WWE stars, it’s not all company storyline.

“I try to balance back and forth, and I’ll mention something about the programming. But it’s such a huge platform to reach fans that I have to use it, it’s very, very powerful.”

Unfortunately for Marella, he’s not booked for the WWE Elimination Chamber pay-per-view on Sunday, the last pay-per-view delivered pre-WWE Network.

“If something develops, it would be nice,” he confessed. “I love pay-per-views. That atmosphere is so super-charged with energy. I want to do what I do and get out there and make the people have a good time.”

As for the WWE Network launching on Monday, like a lot of Canadians, Marella is a bit perplexed why WWE is not making the new network available in Canada.

“I just found it out. It’s puzzling, because it seems to be something that is Internet-based, so I’m not sure how the distribution is going to be carried out,” he said, again thinking about the future. “But I definitely want to become involved with the Network, whether it’s my own show or something. Ever since I first heard about the Network, I knew that someday this was going to be a whole new platform, or canvas, if you will, for me to be able to do the art that I do.”