PHILADELPHIA — Ring of Honor celebrated its 12th anniversary Friday night in Philadelphia, where everything started for them. If the roster has changed over the years, the recipe is the same: fun, excitement, impromptu matches, storylines and mostly, quality wrestling. And this is exactly what the 12th anniversary show was based on.

The roster definitely changed. From the original show, February 23, 2002, at the Murphy Rec Centre in Philadelphia, only Jay Briscoe wrestled on both the first and 12th shows. Mark Briscoe was in his brother’s corner 12 years ago but was too young to be wrestling and Homicide, who was on the show in 2002, made two appearances Friday night but did not wrestle. 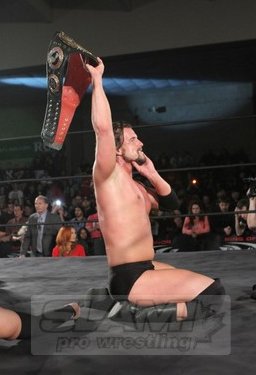 After dispensing with challenger Chris Hero, ROH World champion Adam Cole has to be asking, “Who’s Next?” Photo by George Tahinos

The main story to remember from this show is that contenders for Adam Cole’s World title are piling up.

On top of that list is former champion Kevin Steen. Steen won a 4-way match in San Antonio two weeks ago giving him a guaranteed title shot. Friday night, he defeated Cliff Compton in the main event of the show. In this Unsanctioned match, after hitting each other with “real” kendo sticks (not the soft bamboo made of stuff), chairs, tables and ladders, Steen won the contest with a Package Piledriver on a ladder.

Just prior to this match, Adam Cole had kept his title by defeating Chris Hero, formerly of NXT and a King of Wrestling, in a good, hard-hitting match. After the match was over, Steen showed up, confronted the champion and was ready to get his title shot in front of the great Philadelphia crowd, but Cole declined the invitation.

So after his match, Steen made sure to issue a challenge to Cole and made a promise to his fans.

“Next time we’re in Philly, I’m gonna be Ring of Honor World champion. Mark my words!”

Next in line is Michael Elgin. The Oshawa, Ontario, native, who now lives in St. Louis, has been waiting for a long time now and had a few opportunities especially back when Steen and Richards were champions.

To make sure Friday night’s title match between Cole and Hero was going to be all about the champion and his contender, ROH commissioner Nigel McGuinnes made sure that Jay Briscoe, Elgin, Mike Bennett and Maria were sent back at the hotel and therefore couldn’t intervene in the match.

Although he didn’t compete against Matt Hardy as planned (bad weather in the Northeast prevented Hardy to fly to Philly), Elgin made another strong showing against Florida’s Raymond Rowe, who subbed for Hardy.

And then there’s Jay Briscoe. The “real” ROH World champion has never lost his title and made sure upon his comeback that everyone would remember it, coming to the ring with the belt he never lost.

Briscoe showed he was serious about his claim when he beat Mike Bennett with a Jay Driller in an impromptu match. Even more impressing, he did it even if Adam Cole had ran in, low blowing Briscoe behind the referee’s back.

The recently returning “Phenomenal” AJ Styles is another one who can’t be counted out of the equation. Even though his credentials speak for themselves, a huge win over former TV champion Jay Lethal tells us — and everyone at ROH — that he wants to be back on top of a wrestling company sooner rather than later. This match was the best of the evening in every aspect of it and was in line with what ROH was always known for. Styles was also one of the most cheered performers alongside Steen and Hero.

Last but not least, former ROH champion Homicide and CHIKARA Grand champion Eddie Kingston, known as Outlaw Inc, made sure their message would go through. They first showed up after the lights went off, pulling special ring announcer Scarlett Bordeaux’s hair (regular announcer Bobby Cruise’s flight was also cancelled).

Basically, they said that fans could expect a new member of Outlaw Inc. very soon. After Steen’s win, they showed up again, clapping for the winner and at the same time teasing that Steen or Compton would be their next addition. The bottom line is that nothing happened but the storyline is out there to be continued and one can wonder what would be happening if they decide to go after Cole and his title.

Only time will tell, but Adam Cole’s reign could be shorter than he planned, or one of the best in ROH’s history if he manages to go through all of these top contenders.

All in all, ROH produced a strong show, with not one bad match, that the crowd seemed to have enjoyed a lot. ROH really kicked off its 13th year with this show and with the major announcement the company will make this weekend, it could also be one of the best ever.

In the the other matches:

*Kevin Kelly and Steve Corino were the commentators for the first part of the show and then, Nigel McGuinnes took Corino’s place.

*Before the show started, Corino talked about Ryu Nakata, who recently died. Nakata worked for Japan’s NOAH promotion and was the link between them and ROH when guys like KENTA, Shiozaki and Morishima were working ROH. There was a ten-bell salute to honor his memory.

Pat Laprade and Kyle O’Reilly would like to wish the best of luck to Team Canada and are going to cheer for them (and Carey Price) against Sweden Sunday morning! Pat is the coauthor with Bertrand Hebert of Mad Dogs, Midgets and Screw Jobs, about Montreal wrestling’s history and can be reached at [email protected].