The 23rd Best of the Super Juniors tournament starts in New Japan Pro Wrestling on May 21st, and Kyle O’Reilly is the sole Canadian combatant. Last year, in his debut, he made it to the finals, losing to Kushida. 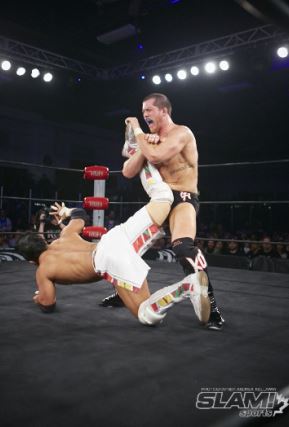 Kyle O’Reilly ties up Kushida in a match in Toronto. Photo by Andrea Kellaway, www.andreakellaway.com

The 29-year-old O’Reilly, originally from British Columbia, was taking on Kushida that night in Toronto’s Ted Reeve Arena in a match taped for ROH television. A rematch won’t happen this year in the Super Juniors finals, since Kushida and O’Reilly are on the same side of the bracket this year.

“I think Kushida is a tremendous talent,” said O’Reilly. “We’ve had a couple of matches and he’s one of my favourite opponents to work with. We both share a similar style and both have similar philosophies on professional wrestling. So getting to work with him is always a treat.”

Over the last few years, it seems that smaller wrestlers — O’Reilly is 5-foot-11, 210 pounds — are getting more opportunities than they used to at the top of the card.

“The lines are starting to become more blurred between a junior heavyweight and a heavyweight,” said O’Reilly. “I wrestled Tetsuya Naito on the pay-per-view in Chicago and he’s the [IWGP] heavyweight champion, so who’s to say what really makes a difference anymore.”

He has had a lot of tag team success with Bobby Fish as reDRagon, winning the Ring of Honor tag titles three times, and the IWGP Junior Heavyweight tag belts twice. During their last reign, they defeated The Young Bucks to win the belts but The Young Bucks won them back at Wrestle Kingdom 10.

O’Reilly was sporting a splint on his left pinkie finger, and explained the injury. “I just tore the tendon off the bone training ju-jitsu on Wednesday. It’s all bent up, I can’t straighten it on my own. I think it’s permanent. I’m keeping the splint on it to try to keep it straight so it’ll heal. I keep having to take it off to wrestle and whatnot. It’s just one of the finer things in life.”

In North America, O’Reilly is a Ring of Honor contracted wrestler, and is not permitted to wrestle on the indies, save for his long-time relationship with Pro Wrestling Guerrilla in California.

When asked how he’s grown as a performer in the half dozen years he’s been in ROH, O’Reilly thought for a moment, and the answered.

“I feel like I grow with every match. I think in wrestling, the moment you stop learning and evolving and growing, then maybe it’s time to move on. I feel there’s still a lot of places for me to go and things for me to learn. I’m glad that I get to keep growing and wrestling guys with more experience, and getting to wrestle around the world is only going to make me a more polished, overall better performer.”