Michael Elgin has quickly become a fan of life in Japan, which is a good thing, since he has only recently begun a two-year contract with New Japan Pro Wrestling.

“As weird as that sounds, the wrestling over there, the culture over there, it’s almost like I was made for it. I really love it over there,” Elgin told SLAM! Wrestling while in Toronto for a Ring of Honor show. 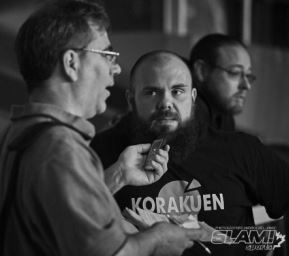 To those that have followed Elgin’s path from Oshawa, Ontario, to Tokyo, Japan, with countless stops in between, his growth is nothing short of breathtaking. The challenges of wrestling strong style in Japan has really prompted him to kick it up a notch in the ring, and he can hang with the best of the world.

“I just think my style is more suited in Japan, so I just caught on a little bit quicker,” Elgin said. He first got to Japan in mid-2015 as a part of a Ring of Honor-New Japan tour. “It took me many years to catch on into Ring of Honor. I started in 2003 and didn’t get to Ring of Honor to 2010. I think just my style, I’ve always formatted it of being a Japanese wrestling fan. So when I went over there, I think it was just kind of a quick thing that the fans just took to me.”

The the NJPW Road to Wrestling Dontaku show, there was an all-Canadian main event, when Elgin challenged champion and leader of the Bullet Club, Kenny Omega for the IWGP Intercontinental title. Although Elgin lost, the match has been rated by fans as one of the best of 2016. At Invasion Attack 2016, Elgin, [Hiroshi] Tanahashi and Yoshi Tatsu beat The Elite of Bullet Club (Kenny Omega and The Young Bucks) to win the NEVER Openweight 6-Man Tag Team Championship belts. They eventually lost the belts back to The Elite of Bullet Club at Wrestling Dontaku 2016.

The easy-going Elgin has made friends in Japan. “I actually spend most of my time with Tanahashi and [Tomoaki] Honma. We hit the gym every day and go for lunch, and then on the bus, I sit near them,” he said.

As for the Japanese language, it’s still a bit of a challenge.”I know a few words, but sometimes when I learn the words we’re a little bit intoxicated, so I forget them the next day.”

The biggest issue for Elgin is leaving his wife and infant son at home in Missouri. He has capable helpers to step in at his wrestling school when he’s away. Elgin is also hosting a training seminar tonight, May 16th, at Superkick’d, in Toronto’s Liberty Village. (More info, see superkickd.com.)

Fortunately, technology has made the great distances seem less.

“Facetime and Skype are crucial because if not, I’m going to miss his whole growing up period, because I’m signed for two years with New Japan,” he said of Jax and wife Rachel. “It’s definitely great, and with some of the plans in the States, I have free data in Japan, so when I get on the bus, I can still Skype with them.”