Many gimmicks of Viscera coming to Tigerfest

Older fans of pro wrestling may remember him as (King) Mabel, a member of Men on a Mission (M.O.M.). He’s probably best remembered as the Attitude Era’s “World’s Largest Love Machine” and member of the Ministry, Viscera. And when ECW was re-launched in the 2000s, he became Big Daddy V. To those who have never seen Nelson Frazier Jr. before, he’s quite a sight.

Whatever the persona, he always gets everyone’s attention. Standing at a towering 6’9″ and weighing well over 400 pounds, the wrestlers bigger than him are few and far between. But despite his intimidating look, he really is a gentle giant. 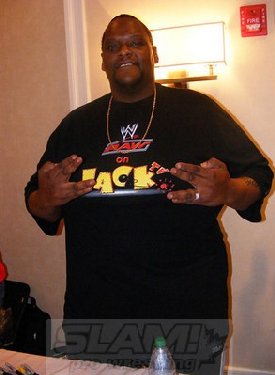 Nelson Frazier Jr. at the Legends of the Ring fan fest earlier this month in New Jersey. Photo by Michael Coons

The persona that most accurately portrays the man is M.O.M.’s “Mabel.” For those who don’t remember M.O.M., they were all about making positive changes for inner-city youths; something Viscera still does to this day. “The mission is to help the kids, that mission will never end,” said Viscera. “We will always be helping them out, anything I can do to help them warms my heart.”

For Viscera, the latest chance to help out will take place at this year’s Tigerfest, sponsored by none other than Tiger Jeet Singh and his son Tiger Ali Singh.

A huge fan of both Tigers, Viscera jumped at the opportunity to participate. “When I got the offer, it was a no-brainer for me,” Viscera said. “I get to see my old friends and get to help out the kids.”

While Viscera may be at Tigerfest on July 1st in Brampton primarily for the younger fans, he acknowledges the necessity to retain older fans as well as older wrestlers. “Old-school fans are more hardcore,” said Viscera. “If we can bring both generations together it’s a chance to see dream matches, it makes the matches more exciting.”

Although this is Viscera’s first Tigerfest, it’s not his first time interacting with either of the Tigers. Referring to Tiger Jeet Singh and Tiger Ali Singh as Tiger Sr. and Tiger Jr., respectively, Viscera has tremendous admiration for both. “Tiger Sr. is a hard-nosed old school guy,” Viscera said. “He shows me respect and I do the same.”

While Viscera didn’t compete with Tiger Sr., he and Tiger Jr. crossed professional paths when Tiger Jr.’s character resembled The Million Dollar Man. “I was there when Tiger Jr. was in WWE, I felt he didn’t get his chance, always dressed nice,” Viscera recalls. “[He] got heat from the boys for doing that, I felt it was a helluva gimmick, but never got his chance.”

Just a word of warning to those attending Tigerfest: don’t expect to see someone as massive as his Big Daddy V character. After his last stint in WWE, Viscera dropped 80 pounds and went to AJWP (All-Japan Pro Wrestling) for a change in wrestling style. He’s glad he made that decision. “It gave me a chance to refresh my career,” Viscera said. “I love the smash-mouth Japanese style.”

Though he wouldn’t divulge which persona he’ll be competing under, Viscera knows that each fan will see him differently. “A lot of people see me as Mabel, I have four more gimmicks I can use that people recognize me,” Viscera noted. “They’ll see me as they remember me best.”

Viscera will be performing in Brampton on Canada Day as part of this year’s Tigerfest main event, which includes WWE alumni Tiger Ali Singh, Tatanka and Bushwhacker Luke, as well as TNA’s Sonjay Dutt. For more information on Tigerfest or Tiger’s foundation, visit tigerjeetsinghfoundation.com.