Battle Royal in the Sky a ‘love letter to the fans’

Wrestling fans are no different than the close-knit followers of any other art or sport; as much as they will defend the honour of their interest against outsiders who dare to criticize or put it down, internally and amongst themselves, they can poke fun at those very same elements. We know when stuff is lame, but we won’t let you call it lame. 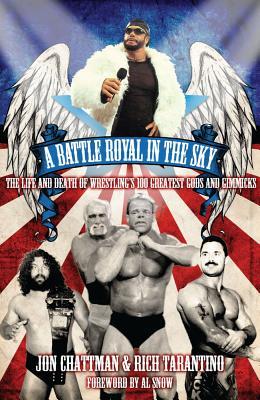 Authors Jon Chattman and Rich Tarantino are, above all else, wrestling fans. That means they know what a bad gimmick is, and they can joke about them with other fans. Underneath that, though, is the undying respect for the business that keeps them watching, if irregularly, even through the corny characters and cringe-worthy comedy.

The long-time friends had already co-authored two books (I Love the Red Sox/I Hate the Yankees, and Sweet Stache: 50 Bad Ass Mustaches and the Faces That Sport Them) before Tarantino pitched the idea of the foundation of A Battle Royal in the Sky: poking fun at over-the-top gimmicks side-by-side with telling tales of some of the many wrestlers no longer with us.

Both authors took some time recently to discuss the creation of the book with SLAM! Wrestling, touching on its “strange concept”, the desire to highlight Randy Savage, and, though not precisely connected to Battle Royal, a professional take on Cody Rhodes’ mustache.

Of the two parts to the book, Tarantino cites the passing of wrestlers as the primary creative motivation. “I’d always wanted to write a book about wrestling,” he explains. “And when a wrestler died, unfortunately, it was always like, ‘There’s another wrestler for the battle royal in the sky.'”

Chattman also bemoans the apathy that a wrestler’s passing engenders in not only mainstream media but even among fans like himself. “I hate to say it, but any time a wrestler dies it’s ‘another dead wrestler,'” Chattman concedes. “You become numb to it after a while.”

After establishing their publishing success, it seemed like the perfect chance to bring Tarantino’s concept to life and combat that apathy.A Battle Royal in the Sky is itself dressed up like a gimmicky novelty. Featuring 50 gimmicks and 50 deceased wrestlers, at first glance it would be easy to dismiss it as heavy on style and light on substance (like, say, The Lex Express, as examined in the book). The lay-out screams coffee table with a stylized “worn” look to the pages adorned with as much imagery as text.

However, as with veteran gimmick-man Al Snow (who writes the foreword), you have to look beyond the window dressing to get at the heart of what is a thoughtful and funny book, with stories not so much academically researched as lovingly remembered by fans. In that light, the visual style of the book becomes augmentative and the total package (nothing to do with Lex Luger, this time) comes together very handsomely. Besides, as Tarantino relates: “The design was all done by the publisher, and they did an amazing job.”

Still, if the nature of the book strikes you as a little odd, don’t worry: the authors knew it.

“This is a book about goofy gimmicks and dead wrestlers — and it’s a humour book,” Chattman begins, acknowledging that while he was not exactly skeptical about the book’s potential for publication and for finding an audience, he was nervous. “The only way this concept is going to work is if we wave the fan flag freely,” he continues, recalling their way of finding the right approach to “celebrate [wrestlers’] lives instead of exploiting their deaths.”

Celebration is just the right word for this book. As much as the way that wrestling fans having become utterly desensitized to the news of a wrestler’s passing may have influenced the tone found in the somewhat light-hearted write-ups of the likes of Adrian Adonis, S.D. Jones, and Eddie Guerrero, Chattman and Tarantino succeeded in keeping the success and fun of those careers at the forefront and avoiding disrespecting their passing.

The write-ups for the gimmicks, on the other hand, are unabashedly adoring in their presentation. These are the characters and storylines that probably looked good on paper beforehand, and can be enjoyed in ironic hindsight, but stunk out the joint when they played out in reality. One Man Gang’s turn as Akeem, the almost obligatory mention of the Gobbledy Gooker, Nitro Parties, and the most attention paid to Arachnaman in… ever, exemplify the kind of targets found in the book.

Thus, the odd juxtaposition of A Battle Royal in the Sky is established, as the gimmicks and respects are intermingled, without creating a separate section for each. This pattern of throwing everything together was only concerning in regards to one man; the one man whose story makes a lot of people nervous when it comes to placing it into wrestling’s history — Chris Benoit.The authors understood all too well how Benoit’s inclusion and his tale would have an overpowering effect on everything else in the book, but knew all the same that Benoit was an important part of this concept. “I was nervous about putting Benoit in there because there’s no upside to it,” Chattman explains. “But we didn’t want to do what the WWE did which was erase him.”

Instead, efforts were made to ensure that readers were prepared for the heavy hand that is Benoit’s tale. “Everyone knows the story, but it doesn’t fit,” says Chattman. “I wanted something to lead into it, rather than reading about something silly and then all of a sudden the next page is ‘this guy killed his wife and son.'”

On the page prior to Benoit’s appearance, therefore, there’s a short quote from Gregory Helms explaining how he has personally tried to reconcile his feelings about Benoit (and how, not surprisingly, he’s still unable to do so). Even that feels out of place, but what it does is bring the reader a half-step into that world before turning the page and taking it head-on.

“I think Helms really hit the nail on the head,” Chattman concludes.On the opposite side of Benoit’s coin, though, was Randy Savage. His story is something of an anchor for the book, as Chattman describes how he became friends with Savage for a time, and therefore absorbed the news of his death much differently. “You don’t get much bigger than Randy Savage,” Chattman exudes. “I wanted to honour him and highlight him, so his death wouldn’t just be a footnote.”

While the authors may have hemmed and hawed a bit over tackling the Benoit story, both agree that the book contains everything they would want and nothing was left on the cutting room floor; there were apparently no shouting matches or fights over what to include or exclude. “Jon and I work so well together, and we have for all three books,” Tarantino attests, citing also the great support from the publishers, creating a truly problem-free “dream job.”

Having the opportunity to speak with someone like Helms and numerous other contributors to the book was also a dream for Chattman, who admits that he loved getting to talk to a lot of his heroes. “Oh, Roddy Piper left a message for me,” he recalls, a little giddy. “It’s midnight and I’m waiting for a call from Don Muraco. Oh, Ric Flair is mad at me because he doesn’t want to break kayfabe, which I think is hilarious.”

The jab at Flair aside, both authors clearly had fun researching this book, which comes through in the writing. Research, though, may not be the right word. “We had to look up dates and locations,” Tarantino explains. “But we really just wrote about the stuff we grew up watching.”

Although neither author has completely detached themselves from the product, neither watches as routinely as they once did. “I still watch these days,” Tarantino offers. “I did drop off a bit during the early HBK/Diesel run for a year or so, although I never missed a Wrestlemania. Can I name every WrestleMania main event? Probably. Can I name every U.S. President? No way!”Chattman, on the other hand, is in self-imposed wrestling recluse mode right now, watching only WrestleMania regularly and otherwise just checking in from time to time, though he freely acknowledges that his love of 1980s and ’90s wrestling, and lack of interest in the contemporary product, is likely as much nostalgia as it is a commentary on quality.

“I’m down on wrestling right now, and I don’t think it holds a candle to what it was. But nostalgia beats everything, and this could very well be the golden age of wrestling for someone else — though I seriously doubt it,” Chattman says. “I think if you’re a 12-year-old boy you love wrestling right now.”

All the same, given Chattman’s past experience writing about Sweet Staches, it seemed only fair to get his take on a currently trending gimmick: Cody Rhodes and his unapologetic mustache. “It’s been a while since a professional wrestler has sported one, and it’s a little disturbing,” he acknowledges, while obviously amused by it. “It is wonderful for instant heel credibility to have an ultra-cheesy mustache. The world is against mustaches, only now it’s coming back as a kind of ironic thing, or if you’re nice enough to do Movember.”

“I applaud Cody Rhodes for adding a gimmick on top of a gimmick. It takes a lot of guts to wear a mustache in public, never mind while being in the ring in your tighty-whities.”

Chattman and Tarantino have turned in a truly Mega-Powers-esque performance with A Battle Royal in the Sky. One can only hope that a manager doesn’t come between them, sparking a backstage brawl amongst stretchers and medical equipment.

Then again, that would make a great sequel.