Mat Matters: Ties between wrestling and hockey continue to arise

The most obvious hockey/wrestling connection is Chris Jericho being the son of 1960s and ’70s NHL veteran Ted Irvine. But, while working on my next book, Don’t Call Me Goon…, there have been many surprising ties between the fast-paced game on ice and the showboating spectacle often performed in hockey arenas.

On a whim, following up a thread for the Johnny Powers piece in the upcoming book, The Pro Wrestling Hall of Fame: Heroes & Icons, I hunted down Hockey Hall of Famer Pierre Pilote, who had once served on a Simpsons-Sears Limited Sport Advisory Council with Powers.

While Pilote didn’t recall a lot about the very-young Powers, he sure knew his wrestling. 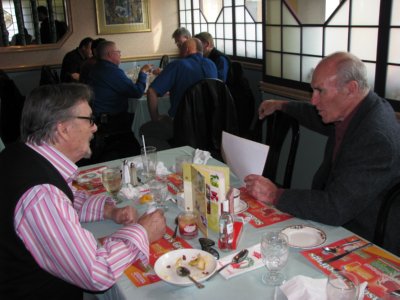 Growing up in Kenogami, Quebec, he’d go see wrestling at the arena in Jonquière. “Do you know that was my number one sport, the number one thing in my life when I was young, around 11 years old?”

“The skating rink there always had an enclosure, not with a roof, just an enclosure, about 10-feet high, and they’d let people in, and people would sit down. I would sneak in somehow to watch the wrestling,” recalled Pilote. “Myself, after the wrestling match, of course, it was always in the summer, after that, I would always get somebody to wrestle with me. I’d put a blanket down on the grass and try to mimic the wrestlers.”

The recollections brought back some long-forgotten memories from the early 1940s, where he worshiped stars like Yvon Robert, and the Lortie brothers, and often discussed the exploits of strongmen/wrestlers Victor Delamarre, Louis Cyr and the Baillargeon family.

“I’m seeing myself walking down the main drag, the way they used to advertise the wrestling match was these big postcards around the telephone poles,” he reminisced. “I couldn’t wait for them to come into town.”

A couple of years back, I met Harry Howell, another Hockey Hall of Famer, at an old wrestlers lunch in Hamilton. Turns out he was a fan too, growing up in Hamilton.

“Wrestling was wrestling. I think they kind of treated it as a game, and that’s all. It was kind of violent, because I used to go to wrestling matches too, at the Municipal Pool, years ago. I used to enjoy the wrestling. Whipper Billy Watson, he’d be there. He was a big guy in Hamilton at one time,” said Howell. Later, when he played for the New York Rangers, if there was the chance, Howell said he’d head to Madison Square Garden to watch the wrestling.

Even without a direction connection, it has quickly become pretty obvious that there are a lot of similarities between the athletes/personalities that made up the dressing rooms.

Curt Bennett, who was an All-Star for the Atlanta Flames, and one of the first Americans to really succeed in the NHL, described the oldtimer games and reunions for hockey players, which, almost word for word, I can vouch goes the same for wrestling gatherings like the Cauliflower Alley Club or the Pro Wrestling Hall of Fame induction weekend. 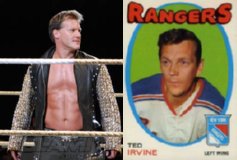 “It’s fun just to get together like that. Hockey players … when they get together, we don’t talk about, ‘Well, remember the game when I scored this.’ It’s usually just funny stories. It’s kind of like being in war. ‘Oh, that guy got shot in the eye.’ They don’t talk about that, they just talk about the fun things, the life on the road, things like that. It’s a camaraderie thing,” said Bennett, who now lives in Hawaii, 100 miles from the nearest ice rink. “There’s a certain respect that they have for each other that way. It’s kind of nice.”

The injuries sound familiar too. Just as Lou Fontinato: “Gordie Howe was a son-of-a-bitch to play against. I got cauliflower ears from him. We fought. He broke my nose, and I broke his ribs. We went at it pretty good.”

It made me chuckle when I talked to Gus Mortson, born in 1925, and one of the oldest NHL veterans still around. I asked him about something I’d read in a story from the 1950s, and he completely denied that he ever had a superstition about not signing autographs before a game. Gee, that’s not at all like asking about stories in the wrestling magazines which used more than a little creative license over the years.

Finally, there are the examples right here on staff. While there is obvious overlap, where some of the SLAM! Wrestling writers also cover mixed martial arts, you’d be surprised how many are into hockey as well.

Richard Kamchen is co-writing Don’t Call Me Goon… with me; Jon Waldman covers the Winnipeg Jets for TheHockeyWriters.com, is working on a book about the rebirth of the Jets, and did a sports card book, Got ‘Em, Got ‘Em, Need ‘Em: A Fan’s Guide to Collecting the Top 100 Sports Cards of All Time, with SLAM! Wrestling alum Stephen Laroche; occasional contributor Russ Cohen wrote 100 Ranger Greats: Superstars, Unsung Heroes and Colorful Characters and covers tons of hockey for www.sportsology.info; and, out in the suburbs of Detroit, Matt Mackinder edits a hockey magazine, and thought so much of young, up-and-coming hockey writer Matt Bishop that he directed him to SLAM! Wrestling, where Bishop is basically the MVP of the team year after year.

No doubt, in the coming months as I get deeper into this hockey book (and engrossed in the NHL playoffs), there will be more and more unexpected connections. Maybe I’ll even write about them.