This weekend marks the first time that a large scale wrestling convention comes to Canada. WrestleReunion 8 takes place at the Doubletree by Hilton-Toronto Airport and features 28 VIP and vendor guests in addition to some of the top independent talent in North America all under one roof. As someone who has attended three Los Angeles conventions and will be in Toronto, I can vouch for the quality of the experience you will have. Here are 11 reasons why you should check out Wrestlereunion this weekend.

1. Value for your money: In today’s entertainment world there are lots of opportunities to meet famous people and they all come with a price. VIP packages ranging from $400-$1,000 can secure you great seats to a concert, some swag, and a few seconds of a meet and greet and photo op. The upcoming Calgary Comic & Entertainment expo allows a photo op with the entire original cast of Star Trek: The Next Generation for $495, and meeting Edge at this weekend’s Toronto Comic-con is $125. For $199 you will meet 17 wrestlers for photos and autographs, which breaks down to $11 per wrestler – great bang for your buck. 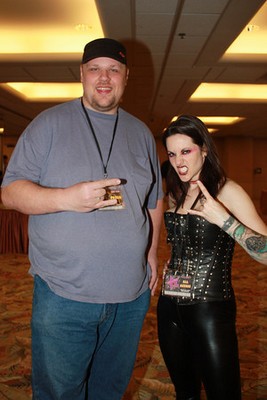 SLAM! Wrestling’s Jason Clevett hangs out with Daffney at a WrestleReunion event in Los Angeles in January 2010. Photos by Christine Coons

2. Feel like a kid again: WrestleReunion will feature stars from the 1970’s to present day. The diverse collection of talent will take you back to your childhood and memories of seeing Bruno Sammartino vs. Larry Zbyszko or cheering on Strike Force (Rick Martel and Tito Santana) to another tag title defense. Having attended three Los Angeles WrestleReunions I can say with authority that there were many times I was in disbelief that someone I watched as a kid was now shaking my hand.

3. Evolving into the future: Some of the best independent talent in wrestling will kick off WrestleReunion Friday night at Evolve. If you have heard names like Bobby Fish, Chuck Taylor and Johnny Gargano this is your chance to see what the hype is about. The headlining bouts of Low-Ki vs. El Generico and Fit Finlay vs. Sami Callihan promise to be epic matches. Past WrestleReunions have featured Chris Hero, Claudio Castagnoli, and Tyler Black — all of whom are in WWE developmental. The first WrestleReunion featured CM Punk. The future of the business will be in action in Toronto, and you may very well see a future WrestleMania headliner there.

4. Intimate and interactive: Events like WWE Fan Axxess can bring you close to the stars, but with long lines for autographs and photos there is still a disconnect between fans and wrestlers. At WrestleReunion you have a moment to ask questions and really feel like you are engaging with the wrestlers. VIP exclusives with Jimmy Hart, new WWE Hall of Famer JJ Dillon and Roddy Piper will give fans the rare opportunity to ask questions. As an added bonus with the wrestlers staying at the hotel there are unexpected opportunities as well. You may end up chatting up Sunny in the elevator or having a beer with Fit Finlay. It really is a fan convention.

5. Toronto goes hardcore: Saturday night’s Pro Wrestling Superstars show is headlined by Tommy Dreamer and Rhino teaming up to face Raven and CW Anderson in an Extreme Rules match. Dreamer nearly stole the PWS show in L.A. in January against Kevin Steen, and when Raven interfered and DDT’d Dreamer the crowd went insane. If you never saw ECW live this is a chance to experience four of its best; if you did, it is a blast from the past. With a solid lineup that includes Fit Finlay vs. Harry Smith, Vader vs. Necro Butcher and a rare North American appearance by Jushin “Thunder” Liger against Roderick Strong it will be a memorable night of wrestling action.

6. Bruno’s farewell: Bruno Sammartino has retired from making appearances any distance from his Pittsburgh home. The opportunity to come to Toronto where he made a name for himself was to good to pass up, this will be the one and only opportunity to meet one of the greatest wrestlers of all time. 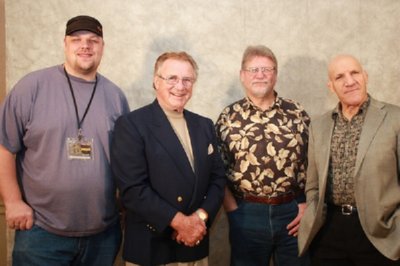 One of these things is not like the other: Jason with Nick Bockwinkel, Stan Hansen and Bruno Sammartino.

7. In the Pit with Piper: One of the top guests of the 2011 Los Angeles event was “Rowdy” Roddy Piper. “Hot Rod” spent a lot of time with everyone he met and really made them feel important and that he valued their time. As one of the biggest stars of all time, it is remarkable how humble he is. The Piper’s Pit set is an exact replica of the original, making for a unique photo. Bring your coconuts or other memorabilia and recreate your favorite moment.

8. Become a star: I know your secret. You’ve been somewhere alone and pretended to be a wrestler, kicking off a promo with “Let me tell you something, Mean Gene…” This weekend you can do it again with Mean Gene actually there. Some of the best promos ever are available to do a video segment with you and WrestleReunion is the only convention that does it. All those hours practicing promos in your basement or backyard will pay off. A picture is worth a thousand words, a video is something truly unique. I highly recommend taking advantage of the opportunity, you won’t regret it.

9. Lovely ladies: Women have long been an important part of wrestling. WrestleReunion 8 features four of wrestling’s most beautiful women — Miss Tessmacher, Nitro Girl Spice, Maria Kanellis and Tammy “Sunny” Sytch. I’ve met all four previously at WrestleReunion and in addition to being stunning they are also really sweet. As an added bonus, Tessmacher and Spice will be doing the always popular bikini photo ops.

10. Breakfast with the Champions for a good cause: It isn’t easy to drag yourself out of bed on a Sunday morning, unless it is knowing you are having pretty awesome company for breakfast. Strike Force, Roddy Piper, Howard Finkel and Mean Gene Okerlund are just a few of the guests for the Titans in Toronto fundraising breakfast. In L.A. this year I had breakfast with Tommy Dreamer and Mikey Whipwreck. Hearing stories and sharing laughs was a pretty surreal experience. A highlight of the weekend and a portion of the tickets go to the Pro Wrestling Hall of Fame in Amsterdam, NY.

11. Make connections and friendships: Wrestling fans share a common bond in their love of wrestling. Even if it has waned, there is still that part that will always love it. I have made lifelong friendships with people from around the world by attending things like WrestleReunion and WrestleMania. I am really excited to reconnect with several friends in Toronto as well as meet people for the first time. It really is a sense of community.

Since 2010 I have had a choice between traveling to WrestleMania or WrestleReunion. I’ve chosen WrestleReunion for similar reasons to these and more. It is a one of a kind experience and a must for any wrestling fan. So if you are within travel distance to Toronto make the trip. You won’t regret it.

Jason Clevett is clearly excited to be attending WrestleReunion for the fourth time. Make sure you say hi to him and the other SLAM! Wrestling staff that will be around all weekend.