in the new WWE DVD release, You Think You Know Me? The Story of Edge, Edge faces all the controversial aspects of his career and does not in any way, shape, or form try to whitewash over any of it.

This is especially true when he and Lita both discuss how their real life relationship began while Lita was still involved with Matt Hardy. Both are extremely upfront about how they felt at the time and how they feel today about what it was like to live through that kind of a situation. It’s a very brave choice by both to discuss it and one that is vitally important in order to understand the kind of impact it had on the evolution of Edge’s career from that point on. 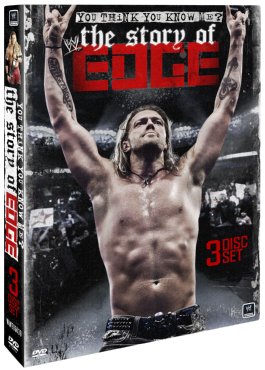 It was also very interesting to learn in detail the early days of Edge’s career prior to his joining the WWE. There is some wonderful archival footage of early matches that Edge had throughout Canada wrestling for different shows and promotions. There is also a great deal of information relayed in the DVD about how Edge and Christian’s friendship evolved over the years and how much of a catalyst that Edge was in motivating Christian to begin his wrestling career.

The documentary is one of the best that the WWE has produced so far and fully encompasses the range of Edge’s career in wresting from the beginning to the end.

As I watched the documentary I found myself reminiscing about all the great moments and matches I had seen involving Edge over the years and was sad when it was over. The documentary wonderfully captures the Edge and Christian tag team during the attitude era, the early portion of Edge’s run as a single wrestler in the WWE, the transformation to the Rated R Superstar, and then the movement to the Ultimate Opportunist. The interview portion of the documentary perfectly encapsulates Edge’s motivation and psychology as he evolved throughout his career.

Perhaps the most heartening thing found in the documentary is that Edge seems to be at peace with his career being over despite it ending due to the neck problems he’s had. Watching Edge talk about where he is now gives the viewer the impression that he’s found his center and is looking forward to the next phase of his life.

If I have any quibble with the DVD, it’s that a part of me couldn’t help wishing that the WWE might have held off releasing it until a month or two later so that Edge’s 2012 Hall of Fame induction ceremony and speech could have been included as the end cap to the documentary.

As for the matches there are some real gems on this DVD set, including a very interesting match between Edge and Christian from 1995 prior to their time with the WWE, a rarely seen four-team elimination match from the 2000 King of the Ring between Edge and Christian, the Hardy Boyz, T&A, and Too Cool, a great No Disqualification Smackdown match from 2002 involving Eddie Guerrero, a 2004 Intercontinental match against Randy Orton, a riveting Loser Leaves Raw/Money in the Bank Ladder Match from 2005 versus Matt Hardy and the 2006 Tables, Ladders, and Chairs match against John Cena. The set also has a Raw 2007 Street Fight match against Shawn Michaels, the Wrestlemania XXIV match with the Undertaker, and many other high quality matches.

However, there are a couple of matches that are surprising by their omission, particularly the Tables, Ladders, and Chairs matches involving Edge and Christian, the Hardy Boyz and the Dudley Boyz. While these matches have been included on other WWE DVD releases, the fact that none of them have been included on this set just seems a bit strange. It also would have been nice to have some of the complete promos from throughout Edge’s career as they haven’t really been shown on other WWE releases.

The Blu-Ray version comes with additional matches including the 2009 Royal Rumble match against Jeff Hardy, Edge’s April 2011 retirement announcement, the September 2011 Edge Appreciation Night, and several other interview clips not found on the DVD version.

You Think You Know Me? The Story of Edge DVD comes with my highest recommendation and if you have someone who is a huge fan of The Rated R Superstar I strongly recommend picking up the Blu-Ray version.