Live Raw hits all the right notes for Mania 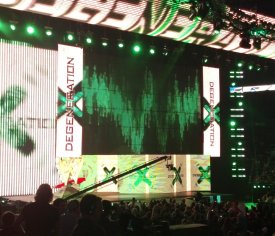 ATLANTA — In the sports world, when athletes refer to big games as having a “playoff atmosphere” it’s about as cliché as possible. However, calling tonight’s Raw Supershow anything less than a “PPV atmosphere” would be a disservice to the great show put on by the WWE.

The last time the WWE was in Atlanta was on Halloween with the Muppets as the guest host. While I loved the Muppets interactions with the WWE Superstars, tonight’s Raw far surpassed that show which brought back wonderful childhood memories for me.

For more than four hours, those in attendance were treated to episodes of NXT, SuperStars, SmackDown and of course, Monday Night Raw. Don’t worry, there are no spoilers about the first three shows, save for one.

Just a short 356 days ago, Philips Arena was host to the first Raw after WrestleMania XVII and with the announcement of WrestleMania XVIII’s main event that night, it’s only fitting that The Rock and Cena return to the building where history was made.

In a night that showcased a mini DX reunion (you read that correctly) where Shawn Michaels did admit that he is better than Triple H, the best was definitely saved for Raw. Two hours before Raw started, Philips Arena already had more people in the stands than during last year’s Halloween episode. While the attendance wasn’t announced, anything less than 16,500 people (almost capacity) attending would be shocking.

While it was expected to have numerous promos for the WrestleMania XVIII matches, the WWE put together two great sets of promotions for the two non-title main event matches. The “Once in a Lifetime” promo segments got a good reaction but the “End of an Era” HHH/Undertaker/HBK promo was the hands-down best both from a production and reaction standpoint. By the time WrestleMania XVIII ends, I fully expect Metallica’s “The Memory Remains” to get the same iTunes download treatment that Living Colour’s “Cult of Personality” did when C.M. Punk made it his entrance theme.

During nearly every commercial break the crowd would break out into the “Let’s go Cena … Cena sucks!” back and forth chant, even without any video package of Cena and the Rock to rile up the crowd. The chants continued well after the show ended and even spilled into downtown Atlanta when the fans left the arena.

Much like WrestleMania XIX, all of this occurred even before the main event of the evening: the final pre-WrestleMania showdown of John Cena and The Rock. This was the first time I’ve ever witnessed a promo where I actually thought there was a possibility of the wrestlers breaking character and getting into a legitimate fight. Not only did Cena point out that he has been in the business now longer than The Rock (ten years fulltime while The Rock was fulltime about eight years) but he now considers The Rock nothing more than “a visitor” returning to WrestleMania, like the countless celebrities over the years.

Cena’s comment that he would be “God-damned” to let a visitor beat him at WrestleMania looked like it genuinely upset The Rock, given he retorted by saying he is anything but a “Goddamn visitor”. I wonder how much of that was beeped out for the television audience.

Regardless of what made it on TV, the entire confrontation including a quick but heated stare down where Cena proclaimed he would “Rip The Rock’s ass”, to end the televised segment is the best way to transition into a PPV that I have ever witnessed.

With The Rock noticeably aggravated that Cena got the last words in, the crowd was fortunate that The Miz decided to show up to further irritate The Rock. Miz had one simple goal with his confrontation with The Rock: he demanded an apology from The Great One for last year’s WrestleMania after the Rock gave him a People’s Elbow after “retaining the WWE Title with a concussion.”

After some choice words between the two discussing the quality of “pie” in Atlanta (Rocky says it’s some of the best he’s ever had), Rock shook Miz’s hand then proceeded to Rock Bottom him as well as follow up with another People’s Elbow.