The Streak: Having an Edge didn’t help

Where: The Citrus Bowl, Orlando 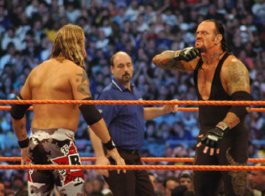 Edge faces off with The Undertaker, with Jim Korderas as the referee, at WrestleMania 24. Photo by Mike Mastrandrea

To say that The Undertaker and Edge have a history would be a major understatement. History was made again at WrestleMania 24, when Edge’s first one-on-one ‘Mania loss became The Undertaker’s 16th ‘Mania victory.

Edge had wrestled The Undertaker on previous occasions, but never in a match of such importance. It was always a treat for him to be involved in any match with The Deadman.

“I remember Christian and I wrestling Taker and Rock for the Tag Team Titles. They beat us and then we beat them, and I think that was the first time that I realized, ‘Hey, I’m in here with The Undertaker,'” Edge said. “He has really big fists. I remember thinking about just how big a man he is and how quickly he moves. He gets knocked down and gets right back up, and if you’re not there, it’s probably not a good thing.”

Adam Copeland began his career in the early ’90s, wrestling for multiple North American independent promotions. He was trained by former wrestlers Ron Hutchison and Sweet Daddy Siki in Toronto and is best known for teaming with his childhood friend Jay Reso (Christian), who was later introduced in the WWE as Copeland’s storyline brother.

Shortly after signing with the WWE in 1997, the duo known as Edge and Christian joined forces with Gangrel to form The Brood. The Brood was quite popular for their unique entrance and gimmick, but really earned their spots due to their in-ring abilities. In early ’99, The Brood was recruited by The Ministry of Darkness. It was a union that didn’t last long, but it was the first time that Edge and The Undertaker had really crossed paths.

“Our first interaction was probably something to do with The Ministry,” Edge said. “Everybody realized that we (The Brood) were getting a babyface pop, so they just let us do our own thing and then go off from there.”

Once The Brood had disintegrated, Edge and Christian branched off into an official tag team, and are still remembered as one of the greatest teams of all time. This was mostly because of their humorous personalities and the series of TLC matches that the team had with Jeff & Matt Hardy and The Dudley Boys in the early part of the century.

Edge and Christian would go on to hold the WWE Tag Team Championships seven times, before they eventually went their separate ways.

Edge had more than a decent run of success as a singles star also. He won the 2001 King of the Ring tournament, the Intercontinental Championship and the U.S. Championship all within one year.

In 2002, more gold was added to Edge’s resume, as he won the Tag Team Championships two more times with different partners (Hulk Hogan and Rey Mysterio).

Edge was on the verge of a major singles push, but that dream was crushed, as an injury in 2003 took him out of action for about a year.

He would not let that setback deter him though, as he returned in 2004, and captured the Tag Titles twice more with Chris Benoit, and also won the Intercontinental Championship again.

In 2005, Edge won the first ever Money in the Bank ladder match, and waited an entire year, before cashing in on a weakened John Cena to win his first WWE Championship in early 2006. That first run didn’t last long, but he did feud with Cena for most of that year, as the two of them traded the title back and forth.

Once that was over with, Edge won the Tag Team Championships again with yet another partner, Randy Orton.

The following year’s Money in the Bank winner, Mr. Kennedy, was forced out of action due to injury, and therefore dropped the briefcase to Edge, who was the first man in history to cash in twice. That time, Edge defeated his WrestleMania 24 opponent The Undertaker, and was immediately labeled “The Ultimate Opportunist.”

“He’s (Undertaker) a leader. He then selected me as one of the leaders and was willing to spread the responsibility,” Edge said. “For a long time, I kind of felt like it was me and him and Rey who were the leaders of Smackdown, and we kind of had to hold up the banner.”

This was also the first time that Edge held the World Heavyweight Championship, but it wouldn’t be the last, as he won it again later that year, after forfeiting the title, due to injury.

Edge held the title all the way up to WrestleMania 24, where he would defend it against the very man he took it from, The Undertaker. And the match was like a dream come true for Edge.

“I remember coming down the aisle and not having feeling in my hands, because it was so surreal just looking up and seeing him standing in the corner like a vulture,” Edge said. “It was right in there as a highlight of my career.”

Edge and The Undertaker had so much chemistry that the WWE started planning more matches between them. And it seemed like every match got better and better.

“To be involved in that match at WrestleMania and then go on to main event that year’s SummerSlam was really cool,” Edge said. “I wanted to actually have a cell match, within the parameters of the PG era that people would like.”

He may be retired, but Edge certainly has a career of show-stealing performances, which he surely has no regrets about. And he’ll have a chance to reflect on that career, when he leads this year’s class of WWE Hall of Fame inductees.