Though he isn’t scheduled on the cards this weekend, you can be sure that CHIKARA Grand Champion Eddie Kingston will be keeping an eye on the Ring of Honor iPPVs to see how the CHIKARA vs. ROH feud is furthered along.

“It’s great to see two companies working together instead of trying to tear each other down,” Kingston told SLAM! Wrestling at CHIKARA’s Canadian debut on Saturday night in Vaughan, Ontario. “Usually it seems like that’s what wrestling promotions do. It’s a good thing. I didn’t like what Kevin Steen did personally, but that his problem. Hopefully, I can settle that with him at some point. Other than that, I like it, I like doing what we’re doing.” 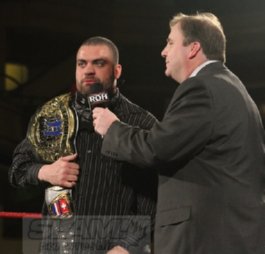 Kingston, the first CHIKARA Grand Champion, having won the belt back in November 2011, got the ball rolling at the beginning of March, at ROH’s 10th anniversary show in New York City. He was in the ring, being interviewed by Kevin Kelly, when Kevin Steen got up in his face, calling CHIKARA a “Mickey Mouse promotion.” Naturally, this lead to a pull-apart brawl between the two. Steen snagged Kingston’s title and indicated he was going to urinate on it, bringing out The Colony and Jigsaw, who all attacked Steen, with Fire Ant diving from inside the ring to the outside on everyone. A brawl erupted again, and continued through the curtain to the back.

It’s great exposure for CHIKARA and himself, said Kingston, a 10-year veteran originally from New York City. “I think it’s a huge help for CHIKARA, and also for Ring of Honor too, but of course, Ring of Honor is a much bigger company than CHIKARA is. So them giving us the rub definitely helps us out.”

Where does it go from here?

CHIKARA is different than Ring of Honor, he agreed, but with so many wrestlers who have worked both sides of the promotional war over the years — including Kingston — it bodes well for the future.

For the uninitiated, Kingston offered up a simple description of CHIKARA. “If you like comic books, if you like Mortal Kombat, if you like Japanese anime, and you like pro wrestling, that’s CHIKARA. It’s a whole different world, it really, really is.”

Greg Oliver, the Producer of SLAM! Wrestling, enjoyed his first CHIKARA experience alongside his five-year-old son, Quinn. On the way home, Quinn affirmed that Toronto up-and-comer Brent Banks of the Squared Circle crew that had a bout on the show is still his favourite wrestler — and always will be. Greg can be emailed at [email protected]