Jim Ross to be applauded for a lifetime in wrestling

His voice is attached to some of the greatest moments in the history of professional wrestling. And soon, his name will be attached to an elite list of wrestling legends, as the Cauliflower Alley Club presents Jim Ross with its Art Abrams Lifetime Achievement award.

The presentation will be next week, at the CAC’s 45th event, April 19-21 at the Gold Coast Hotel and Casino in Las Vegas. 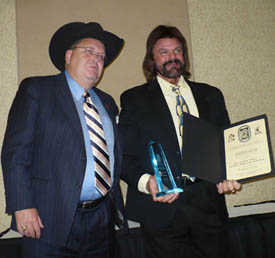 Having dedicated more than 30 years of his life to the wrestling business, Ross is living proof that hard work does indeed pay off. He couldn’t be more thrilled to add this award to his long list of career accomplishments.

“I’m very humbled to be considered for any award from CAC, much less to be receiving this lifetime achievement award,” Ross told SLAM! Wrestling in a recent email interview. “The CAC is a wonderful organization that is operated by hard working, loyal supporters of pro wrestling. They have no ‘agenda’ and are simply dedicated fans and supporters of the business.”

Many argue that Ross is the greatest announcer in the history of the business. He’s a man who needs no introduction, but certainly deserves one.

Ross gained some early broadcast experience doing college radio. Ross’ first introduction to the wrestling business came in 1974, when he worked for Lee Roy McGuirk and his partner Bill Watts in the Oklahoma territory. His first announcing gig on TV happened in the late ’70s, when Ross had McGuirk as his partner. Ross says McGuirk was the most unique partner he’s ever worked with, because McGuirk was completely blind. Ross also served as a referee. He was Mid South’s lead commentator by 1986.

Soon after, Jim Crockett Jr. bought out Mid South in a merger with his Jim Crockett Promotions group and Ross went to work for Crockett. He eventually climbed his way up the ranks in the NWA as well, becoming the lead play-by-play announcer, and worked straight through the transition from NWA to WCW, when the Crocketts sold the company to Ted Turner.

Ross left WCW in early 1993, but a lot of people might be unaware of the fact that prior to going to work for the WWE, Ross had a brief run as part of the Atlanta Falcons broadcast team. His first assignment for WWE was doing play-by-play for Wrestlemania 9. After 1993, Ross’s announcing duties were lessened, but he would eventually work his way back onto the lead announce team, working with Vince McMahon and the late Curt Hennig by the end of 1995. Hennig was later replaced by Jerry Lawler, who Ross seemed to have great chemistry with, and following the Survivor Series in 1997, McMahon left his announcing duties behind, leaving Ross and Lawler in full command of the announce table for the next 10 years. During this time period, Ross and Lawler were calling the action for the WWE’s flagship program, Monday Night Raw. During this time period, Ross also called the action for the XFL on NBC, during its one year in existence. In the summer of 2008, Ross was drafted to the Smackdown brand, where he worked with a number of announcers such as Mick Foley, Tazz and Todd Grisham. As well, from 1999 to 2005, Ross was Executive Vice President of Talent Relations for WWE. Although Ross has been inactive on camera lately, he still entertains his fans worldwide with his series of blogs at jrsbarbq.com.

Inducted into the WWE Hall of Fame in 2007, the CAC award is something different because it is his peers honouring a colleague.

“Any time one can address one’s peers and a collection of dedicated wrestling fans, it’s an honour,” Ross said.

Ross has attended the CAC reunion before and always has a great time. He says the host city of Las Vegas, holds a special place in his heart because it was the very city where he did his first WWE broadcast, and it’s also the city where he says he was privileged enough to call a two-out-of-three fall match between “Stone Cold” Steve Austin and Triple H. But just as important to Ross is getting reacquainted with old friends and colleagues and having the opportunity of getting to know his fans. 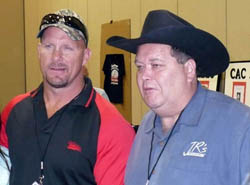 Steve Austin and Jim Ross at the 2008 CAC reunion.

“CAC functions are low key, unpretentious and come from the heart, based on my past experiences at the event,” he said. “The atmosphere is laid back and everyone feels comfortable and relaxed. It seems like it would be a wrestling fan’s dream to attend, because there have been so many stars from many generations who attend. Browsing at the memorabilia tables is worth the trip. Hearing veteran wrestlers tell their stories to their peers is priceless. Seeing some of the game’s all time greatest names in a relaxed setting is wonderful. One even gets to see and hear Pat Patterson perform his ‘night club’ routine. However, if Pat has one too many beverages and decides to do ‘naked karaoke’ then I’m heading for the Oklahoma hills.”

This year is specifically exciting for Ross, not only because of the award, but because one of his closest friends, Stone Cold Steve Austin, has taken time out of his schedule to attend. And that means more to Ross than anything else.

“I still admire and respect the wrestling business, and being around others that feel likewise is always fun,” he said. “The fact that Steve Austin is coming to Vegas to introduce me when I receive the Art Abrams Award is especially rewarding to me personally. Steve is so busy these days with his ever-evolving movie career, and for him to make time to attend this event is extraordinarily special. One of the great gifts of being in the biz are the friends that one is fortunate enough to make. And Steve and I will always be friends, thanks in part, to the wrestling business.”

Of course, Steve Austin was there to induct JR into the WWE’s Hall of Fame, and he’s given his word that he plans on making the greatest of efforts to be in Vegas for this. Like Ross, Austin has attended the event before, but this time, it’s a special occasion. And with JR receiving this award, Austin is brimming with excitement.

“I’m trying to get down there (Vegas) for that deal with Jim Ross. I’m trying to clear my calendar. Yes I want to go,” Austin told SLAM! Wrestling. “I thought there were some really cool people down there. Of course, Nick Bockwinkel and all those cats that were there. I enjoyed being in that mix of guys, and the fans, and all the other people that I met there. It was just good times. It’s low key and it’s a lot of fun.”

Now that all the pieces seem to be in place, the only thing left to happen is for the CAC to give Jim Ross his award, to celebrate, as the award itself proclaims, a lifetime of achievement.

“I don’t feel as if my career is nearing its end. But that’s what everyone in wrestling says as they get older,” Ross said. “If my days in pro wrestling are numbered, I have no regrets. Nonetheless, this honour came as a surprise, but is greatly appreciated.”