It took me several years to find where in the world Earl “Mr. Universe” Maynard had disappeared to. The 1960s and ’70s star with the all-natural body had left the bumps and grind of the biz behind in 1976 for a blossoming acting career, most notably as the villain in the Nick Nolte/Jacqueline Bisset blockbuster The Deep. 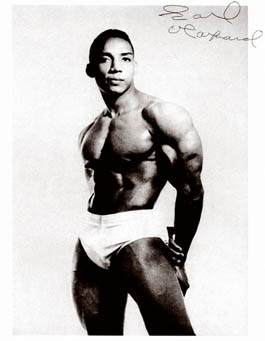 Earl Maynard in his heyday.

Not even his sensei, “Judo” Gene LeBell, knew where Earl was.

“Mike, Earl The Pearl seems to have disappeared,” Lebell said. That was the additional nickname Gene used when he’d interview him in the “locker room interviews” portion of the Los Angeles English and Hispanic weekly TV wrestling shows in the Eaton/Lebell territory.

The mystery was solved when I booked the original Dan “King Krow” Kroffat on my radio show. Kroffat made quite a name for himself in the L.A. territory in 1970 and 1971, after Jules Strongbow and his co-booker, “Mr” Charlie Moto, had requested Stu Hart send his top babyface down to work for us.

“For some reason, Charlie took a liking to my work and immediately labeled me as King Krow,” Kroffat recalled. “I’d never been called that before, and it just stuck. It was a wonderful opportunity, and helped get me booked into Japan.” Kroffat had some classic tag matches teamed with fellow heel John Tolos, and held and dropped the United National title — part of what later became All-Japan’s Triple Crown Championship — to “Giant” Seiji Sakaguchi, and teamed with him in Southern California, most notably against the Funk brothers.

It was Maynard who had discovered Kroffat on a Vancouver beach, and suggested he try pro wrestling. Their friendship continued while working for Lebell in L.A. and Roy Shire’s circuit in San Francisco. 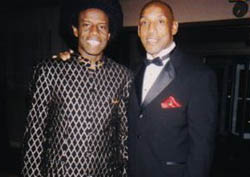 When Maynard’s name came up as someone Kroffat enjoyed working with, he told me where to contact his longtime pal: Barbados.

And after having Maynard on my show as well to talk about his wrestling and Hollywood career, I nagged him about attending his first-ever reunion in Cauliflower Alley this week in Vegas. Kroffat will be attending his first reunion as well.

Maynard had been out of wrestling’s circulation, but wanted to know about the passings of John Tolos, Mike Lebell, The Sheik, Fred Blassie and some of his other friends. He talked about discussing steroids with Superstar Billy Graham in the downstairs Olympic Auditorium dressing room, far from earshot of any fans; and how he felt they would poison the business and potentially hurt Graham’s health. Maynard, who won bodybuilding’s Mr. Universe championship two years in a row in the early ’60s, says he was always clean, and “never ingested any cheating or additive chemical or substance in my life. For many years, I’ve talked to kids, students, bodybuilders about all the many dangers. It killed a lot of people in wrestling, bodybuilding, football and more.” 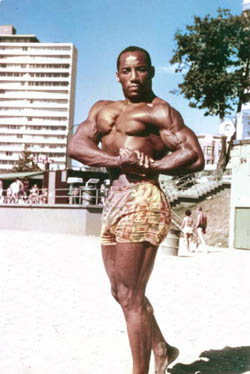 The natural choice is perhaps one reason why Maynard was very agile and quick in the ring. He had the tremendous training, coming up with another good friend of his in former NWA World Junior champion Les Thornton.

Maynard recalled the duo’s early days in England. “We were around Wigan academy, and the great shooter/hookers of our generation in Bert Asserati, Billy Robinson and more. I broke in there in the UK while I was in the service, on loan from my home in Barbados. We had so many great wrestling tours throughout Europe, and then Papa Gust Karras heard of me, and brought me to the U.S. and my first territory there in Kansas City. Gust took good care of me and eventually sent me to work for Vince Sr. in WWWF for Capitol Sports. There I became great friends with gentlemen like Bruno Sammartino and Pedro Morales.”

In the late ’60s, when Earl began calling the West Coast home, he did double duty along with Kinji Shibuya and Masa Saito for both Lebell and Shire, working the entire state before continuing on through the Pacific Northwest and up into Vancouver, and Calgary’s Stampede Wrestling.

“I think I was Rocky Johnson’s longest tag team partner. We traveled everywhere together and I cherish that friendship too. That’s why I’m so proud to see what a big name Duane became both in wrestling and in movies. Sort of like me! I remember when he was still in diapers,” Maynard said.

Other partners of Maynard’s include Bearcat Wright, Bobo Brazil, Blassie, Ray Mendoza, Mil Mascaras and others. 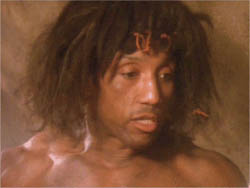 Maynard in the 1982 film Sword and the Sorceror.

“One of my top thrills — besides wrestling for Vince Sr. in WWWF and at Madison Square Garden — was main eventing against John Tolos at the Olympic Auditorium. And working with Fred Blassie, Ray Stevens, Pat Patterson, Walter Kowalski, so many great stars. But none of that would’ve occurred without Papa Gust Karras.”

Maynard was unique in combining the mat and chain skills he learned with the best in the UK, along with his version of Brazil’s headbutt. “My famous side headbutt. No one was doing that, so it was something I came up with to be different from everyone else. And I don’t think anyone’s used it since.” Maynard was America’s tag champ with Dory Dixon, and held most every title in the L.A. territory, including the TV “Beat the Champ” belt.

Sammartino was complimentary of Maynard. “He never took any negative substances and was a class athlete and human being, giving others advice in the locker room on how to do it naturally. He was a bodybuilder and I was a weightlifter, but we really hit it off. I liked Earl a lot and would enjoy talking to him again,” Sammartino said.

Maynard said he never experienced racism anywhere he worked in the U.S. until the late ’60s somewhere in the Amarillo territory when he was partnered with Thunderbolt Patterson. “I had to ask Thunderbolt what they were shouting at me. I had no idea what racism was and unfortunately, I was afraid for our lives there. Great territory with energetic fans, but scary at times. That was the very first time for me and I was blind to it, always thinking we were all equal as people. Now things are much better. I cried when I heard Obama finally became U.S. President. We’ve come a long way on this planet with more hopefully to come to make things better for everyone.”

After appearing in some 20 films, Maynard moved back to his beloved Barbados from Hollywood and began directing his own features, as well as becoming a real estate mogul. “Barbados is beautiful, the best diving, fishing, food and scenery. I couldn’t think of living anywhere else now.”

Maynard, after being away from the wrestling spotlight for some 35 years, is eager to see as many friends as he can at the Cauliflower Alley Club reunion. The feeling is shared by his many friends who can’t wait to see Mr. Universe, one of the all-time nice guys in wrestling.