New Shawn Michaels DVD gets a reluctant thumbs up

Like so many wrestling fans out there, I’ve been a longtime fan of Shawn Michaels. I’ve amassed a collection of his greatest matches on videos and DVDs (both directly in directed compilations and indirectly through other assorted recordings), I’ve read his book and have even had the good fortune of speaking with him in person.

So why then do I need WWE’s latest bio offering?

The answer? I’m not sure I do; or at least that’s what I thought.

This week, Shawn’s latest DVD, entitled Shawn Michaels: My Journey, hits stores, and inevitably it will garner curious looks from a lot of fans, namely those who want the “best of HBK” in one three-disc handy collection.

Yet it is the fourth Michaels-centered DVD. A quick scan reveals that there was also Boyhood Dream, From The Vault, and The Shawn Michaels Story released. Now granted, each of these has different components of HBK’s career, albeit with some overlap, but I think you’d have a hard time convincing even the most hardcore of HBK fans that a fourth compilation is necessary. 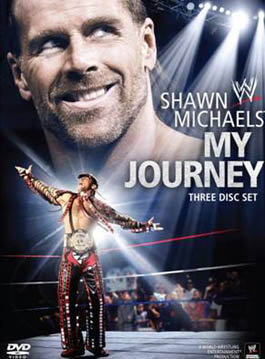 Despite this though, there is an element of the DVD here that makes the DVD intriguing. For the first time that I can remember, and possibly ever being in a WWE DVD, the entire documentary portion is sit-down interview style between Michaels and Michael Cole.

So what was accomplished differently here? On the surface, the presentation is different and thus makes for a unique watch. Digging beneath though, the stories and perspective we hear aren’t entirely different than what we saw in The Shawn Michaels Story or read in Heartbreak and Triumph.

Yet there’s something that grabbed me here. I probably spent a week digesting the DVD and found that while I knew the story and have seen the matches in other places, I still found myself hooked. Sure, there were parts I could skip over, but there was still a freshness to it, perhaps brought on by the reality that Shawn’s career as of WrestleMania 26 will be done (or as done as any WWE career really is). Shawn’s own continual method of revealing his life by peeling back the proverbial onion layers one at a time certainly helps keep viewers coming back for more, as does WWE’s very careful marketing of their “inside looks” at their Superstars.

Maybe that says something about the nature of WWE DVDs — people will complain about it being same s*** churned out, yet there’s enough of a difference that gets people’s attention. Heck, look at how a sports card company can produce 20 sets a year that have basically the same content, yet have just enough of a difference to bring in collectors who will purchase multiple products in a year.

So in the end, I can’t help but give My Journey a thumbs-up, because the different presentation style and the little nuggets of something different made me want the DVD to begin with and will ensure that it stays in my permanent WWE library.